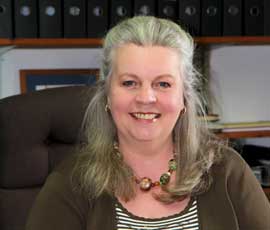 Since the death of her husband in 2010, Sally has taken over the running of the family’s pig business in Oxfordshire. A mother of four sons, Sally recently became the first lady to be voted onto the National Pig Association producer group. The eldest son is a land surveyor, the two middle boys work for the family business, while the youngest is studying agriculture at Harper Adams. Between 4,000 and 5,000 pigs are fattened at home, with other units run elsewhere.

Before my husband’s death I was involved in the accounts and the running of the sow unit, but it soon became clear that my role needed to change and I’ve become the join-up person between the three divisions of the business – sow, nursery and fattening. I liaise with the different managers – two of whom are my sons – and make time to look at where we are going. It’s so easy to stay static, but farming is a changing business and it’s vital you keep up-to-date. We were lucky we had time to plan ahead. My husband was given five months to live but ended up living a further two and-a-half years, so we were able to talk about what changes needed to be made. Such a busy life has been a saviour really; it hasn’t left me with time to dwell.

What is your biggest achievement?

Looking out and seeing my boys carrying on what their father started; helping them in whatever way I can. They were all such adventurous lads I always smile that I’ve done well to keep them all alive.

If you had one piece of advice for a rural woman, what would it be?

A sense of humour and tolerance. Diplomacy is also a useful skill; sitting and listening rather than making a knee-jerk reaction, a skill I’m still trying to master!

If you could change one thing to make life better for rural families what would it be?

I would like to go back to the time when all families knew someone who lived in the country and had a connection with farming. When I was a girl, aunties, cousins and friends used to come and stay on farms in the summer. It meant people – even if they lived in the towns or cities – grew up with an innate understanding of the countryside. It would be so helpful to rural communities not to be so isolated from their customers. It’s often as if they come from different worlds.

How do you think the life of a young woman on a farm has changed compared with 50 years ago?

It’s easier now than life on the dairy farm where I grew up. My mother was up at 5.30am helping my father with the milking and it was much more physical, with churns to be lugged around and portable milking bays to set up.

Is the countryside a sexist place?

I have always found the gentlemen I have dealt with in the pig industry to be helpful. They’ve shown great empathy and always been ready with advice and kindness. I think farming is one of those industries that because of the physical side of it – there are jobs that women just aren’t strong enough to do – outsiders presume that it is sexist. But that’s not the case when you’re actually within the industry.

What are your hopes and dreams for the future?

That the economics of agriculture enable my sons and their children to enjoy a successful future where they are fulfilled in their ambitions. One of the problems that young people have is that they don’t see farming as an industry that’s well supported. Hopefully we’re making headway on the political front.

If you hadn’t chosen the course in life you have, what would you have been?