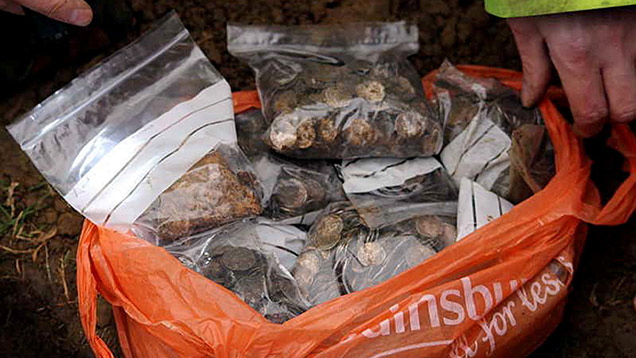 A Buckinghamshire farmer could find 2015 to be a lucrative year after a hoard of ancient coins thought to be worth about £1m was discovered on his land.

A metal detectorist unearthed the 5,000-plus Anglo-Saxon coins buried in a lead container near Buckingham during a Christmas dig.

The find, which is in near mint condition having been buried 2ft under the surface, is said to be one of the most significant in recent years and contains specimens dating from the 11th century.

The detectorist was one of about 100 taking part in the festive hunt, organised by the Weekend Wanderers Detecting Club.

“This is something you dream of witnessing, let along digging up,” club founder, Pete Welch, told the press. “Metal detecting is a bit random, but most farms have a bit of history so you have a chance of finding something.

“Everyone dreams of a pot of gold. The reality is you spend most of your time digging up bits of junk. This is the first of its kind since I’ve been running the club, which is 23 years.”

The hoard contains perfectly preserved pieces depicting the faces of kings Ethelred the Unready and Canute.

The coins will now be examined by experts and, if bought by a museum, the proceeds could be split between the landowner and the finder.

The largest UK hoard of Anglo-Saxon treasure was found in a field in Staffordshire in July 2009 – 1,600 items from the 7th century, worth more than £3m.