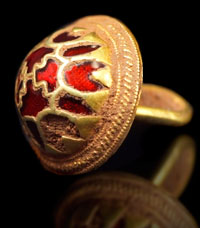 A treasure hunter has unearthed the largest hoard of Anglo-Saxon gold ever on a Staffordshire farm.

The find was made by Terry Herbert who was searching in a field farmed by a friend of his.

The exact location hasn’t been disclosed for fear it would prompt a rush of visitors and would-be looters, but media reports suggest on the Lichfield side of Burntwood.

The collection, which could date back to the 7th century and be worth well over £1m, contains more than 1500 military artefacts.

The find was classified as “treasure” earlier today by a coroner – so a committee made up of independent experts will now value it and local museums will be given the chance to purchase it. The money is set to go to the finder, who usually passes half to the landowner.

The hoard is being held in secure storage, but some items will be displayed at Birmingham Museum and Art Gallery.

Mr Herbert said: “My mates at the [metal detecting] club always say if there is a gold coin in a field I will be the one to find it. I dread to think what they’ll say when they hear about this.”

He added: “This is what metal detectorists dream of, finding stuff like this. But the vast amount there is is just unbelievable.”

Staffordshire County Council leader Philip Atkins said: “This is a world class find, and possibly the most significant treasure discovery in the British Isles since the Sutton Hoo excavations of 1939.”