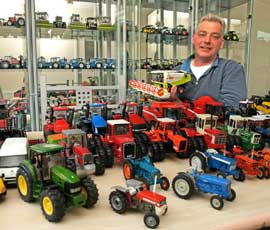 It’s not unusual for farming people to have a small collection of, say, half a dozen model tractors. But in a semi-detached house in Towcester, Northamptonshire, there lurks a collection of nearly 500 model tractors, combines and implements.

It all started 40 years ago when Mark Williams, who was four years old at the time, saved up his 6d-a-week pocket money for untold months and bought his first model tractor.

In fact his collection has spread all over the house. Wherever you look he has a display cabinet heaving with models, though he draws the line at having them in the bedroom.

“All my family, including my daughters, always add to my collection on birthdays and at Christmas as they know it’s always a safe bet. I go to toy fairs, look on the internet, and when I have time, go to car boot sales.”

“I picked up a little bargain last year at a car boot sale, when I spotted this white County 1884 battery-powered model tractor from the early 80s. I got it for £6 but knew it was worth at least 10 times that amount.”

His most valuable model? “The little blue Fordson Major made by Britain’s Toys. I bought it 10 years ago for £120 but wouldn’t be surprised if it’s worth over £200 now. It was the first time this company had produced a model with a three-point linkage that works.”