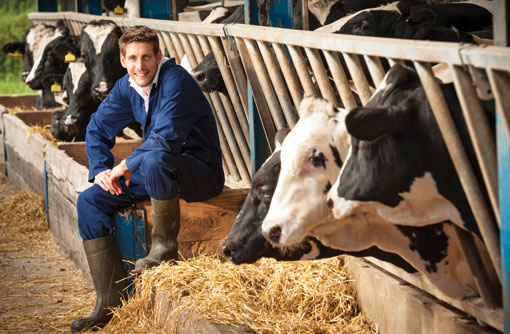 There are far fewer farmworkers on British farms than there used to be and those that remain are often the linchpin of the business. Long hours, an ability to turn their hand to any job and tremendous dedication are what make our three Farmworker of the Year finalists true unsung heroes. David Cousins reports on the work of one, William Raw

Many farms are in the lucky position to have quiet times of the year, giving the farmer and his staff a chance to take a breather and gather their energies for the round-the-clock labours to come. But at Norbury Farm, near Ashbourne, Derbyshire, the work simply never stops.

Andrew Robinson is the man who runs this 220ha mainly tenanted farm, with a 240-cow pedigree Holstein herd, an intensive bull beef system and a sizeable arable enterprise. There are three full-time staff and two part-timers.

Farmworker William Raw, 29, joined the farm in 2006, having come from a large farm in Yorkshire. He was certainly used to hard work; in fact he had worked every Christmas day since he was 10.

“We just sort of clicked,” says Mr Robinson. “I felt this was someone I could work with. He never loses patience and always has that spark of initiative and conscientiousness.”

Six years on, Will’s roles are impressively diverse. He feeds the cows and youngstock, organises the part-time staff and tractor drivers, checks the outside stock and keeps an eye on fences.

He is also responsible for filling and consolidating the grass and maize clamps in spring and monitoring the quality of feed as it’s fed out.

It’s evidently high-quality feed, too, as the farm’s silage has been in the top three of the Staffordshire and Birmingham Agricultural Society (SBAS) annual silage competition for several years on the trot.

Not just that, but Will also monitors feed stocks and liaises with both the vet and nutritionist to make changes to the ration. He’s a skilled and enthusiastic stockman, too, and provided the impetus for starting up the bull beef enterprise again.

But one of the most impressive aspects of Will’s work at Norbury Farm is his keenness to keep improving his own – and the farm’s – already-high levels of professionalism.

He attends discussions with the local buying group, takes an enthusiastic part in trials work with Westpoint Vets on subjects such as colostrum feeding and calf respiration and has hosted a discussion group on the farm’s calf rearing.

He’s obviously an innovator when it comes to equipment, too. Recycling old 1,000-litre IBC tanks into calf hutches gave him a cheap way of providing better calf housing that has noticeably improved calf health.

The idea also won him a special innovation prize in 2010 from the SBAS.Developing new staff on the farm is something that he’s also particularly keen on. The farm works closely with Derbyshire Agricultural Rural Training (DART) to take on NVQ students and apprentices and Will has a very important role in providing on-farm training for younger members of staff.

But perhaps the most telling example of William’s commitment to Norbury farm, not to mention his professionalism, was the fact that in 2009 Andrew suffered from a serious illness that took him away from the farm for two months.

For many farmworkers, taking on the responsibility of managing the farm would not be an option. But it’s to Will’s credit that he carried on the day-to-day running of the farm with his usual professionalism and attention to detail. And that’s despite having three young children, who rightly expect to have a good chunk of his time too.

“I suppose I treat the farm as if it’s my own place,” he says. “Seeing the final product is always very satisfying – it gives me a great buzz.”

Isuzu UK understands that British farmers need a tough, versatile workhorse with impressive load and towing capacities, which is comfortable transport, too – that’s why the all-new Isuzu D-Max is the perfect companion.”

Meet the other farmworker finalists Ian Stubbs and Phil Baynes

Meet all the other 2012 finalists