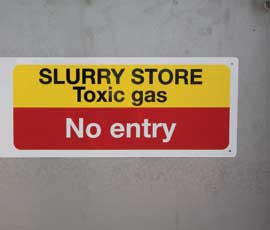 The death of a farmworker who was overcome by methane fumes at one of Britain’s first farm anaerobic digester units was an accident, a coroner’s inquest jury found.

Matthew Pitt, 29, was overcome by toxic fumes while working on a slurry tank on a farm in Dorset, an inquest heard.

The father-of-one, from Sturminster Newton, was given CPR and airlifted to hospital, but he never recovered consciousness and was pronounced dead.

An inquest at Bournemouth Town Hall heard Mr Pitt may have removed his mask and was overcome by hydrogen sulphide fumes at Lowbrook Farm, Belchalwell, near Blandford, in June 2009. The dairy farm has been owned by the Yeatman family for three generations.

A joint investigation by police and the Health and Safety Executive (HSE) found there was “insufficient evidence to support a prosecution for manslaughter or corporate manslaughter”.

On Tuesday (15 October) the HSE said it would be reviewing all the evidence presented at the inquest into the death of Mr Pitt “before making a final decision about whether or not to take any further action”.

Read the latest news on farm Health and Safety