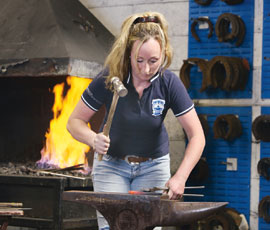 An increasing number of women are picking up their hammers and joining the ranks of the UK’s female farrier community.

Registrations by female farriers have increased by 70% in recent years for a career that was traditionally viewed as a physically demanding job. And what’s more, women are showing a huge talent for what they do.

Sarah Mary Brown became only the second woman in 650 years to be recognised as an elite farrier when she was named an ‘associate’ of the Worshipful Company of Farriers in 2011.

Based near Cleveland in North Yorkshire, Sarah Mary has been shoeing horses for more than a decade, inspiring more girls to go into the career.

“People used to be very surprised when I turned up, but it is less unusual to see a female farrier these days,” she says. “There’s a growing number of women working in the field, which is great because it’s a fantastic job, even though it is extremely hard.

“You don’t have to be all butch to be a farrier. You just have to be yourself and enjoy what you do.”

Growing up in the middle of Glasgow, Sarah Mary’s career choice wasn’t an obvious one, but a childhood hobby of horseriding introduced her to the job.

“I used to watch the blacksmith at the stables and thought it looked really interesting,” she says. “I started asking the local farriers if I could watch what they were doing, and they showed me how to take the shoes off.”

Against the advice of her school careers advisor, who “didn’t see it as a ladylike career”, Sarah Mary applied to do a one-year pre-farrier course at Oatridge College.

“The course was a massive starting block for me,” she says. “A lot of the boys on the course were from a farming background and were used to handling tools.

“I could muck-out horses, but I had never used a hammer. I wouldn’t have been able to get an apprenticeship if I hadn’t done the course and gained those basic skills,” Sarah Mary adds.

Completing the course helped her gain a prestigious four-and-a-half-year scholarship with Derek Gardner in Penrith, Cumbria. An experience she says that was hard work, but fantastic.

“It’s difficult to get an apprenticeship and I was very lucky as mine was fabulous. I don’t think I was treated any differently because I was a girl. I just got on with things.”

It was through her apprenticeship with Derek that Sarah Mary was introduced to competitions, which soon became a hobby.

“Competing helps when you are an apprentice because it helps you work on your shoemaking,” she says.

“I was terrible with my nerves so I thought competing would help me get over them in time for my final exams. It turned out I was still as nervous as hell, but it definitely helped improve my standards.”

Sarah Mary says she finds it inspiring to see other farriers at work at competitions and they drive her to perfect her skills.

“I have had a little bit of success in competitions,” she adds. “I was in the Scottish Apprentice team and I’m a reserve for the Scottish team this year.

“This July I am also going to Canada for the world championships, and there are more women there than ever which is great.”

Sarah Mary’s interest in competitions is also helped by her fiancé Steven Bean, who is a farrier and has won the World Farrier Championships four times.

“He’s fairly good,” she laughs.”We often practise at the same time so we look at each other’s work. We are both very critical so it helps us push each other to do better.”

The couple competed alongside each other at the Bath and West Show last month, with Sarah Mary taking part in four classes with shoemaking and different styles of shoeing, including cobb, hunter and pony.

“I do about 10 competitions across the country each year and I could do more if I wanted to, but it’s a physical job and you can’t tire yourself out or push your body too far.”

Proving she can handle the physical side of the job is something Sarah Mary has had to work on, but she says people recognise she is just as capable as her male colleagues.

“I’m quite well-established now, but there was a point in my career where I had to prove myself, particularly with the bigger or frisky horses where people say you are not built for it.

“The opinions about women being farriers are probably changing now, particularly in apprenticeships where there are more and more girls getting them, but you just have to get on with it.

“It’s about getting the right people to shoe horses, regardless of whether they are men or women.”