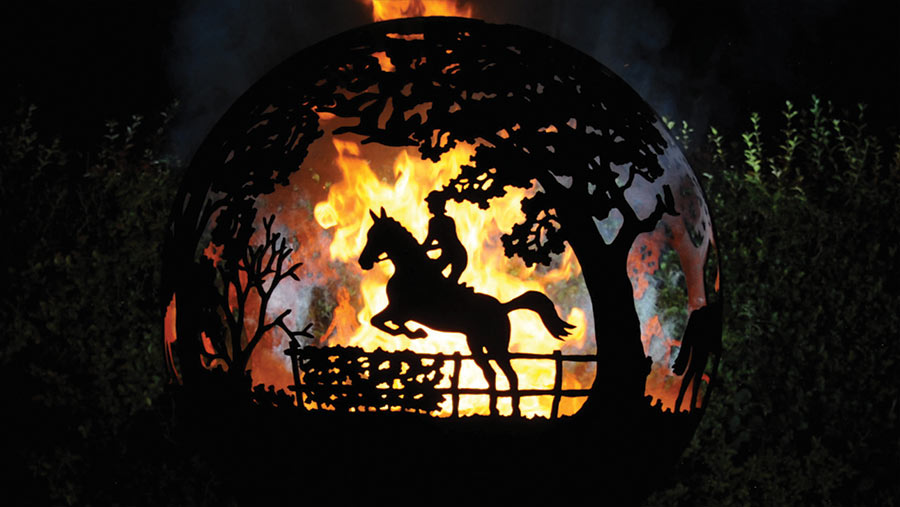 Andy Gage’s job title is no longer simply farmer. He now calls himself a farmer and sculptural artist.

Andy’s artworks are firepits, which take the form of huge steel balls with intricate carvings. The spherical firepits make beautiful sculptures – with or without fire inside them – and brilliant patio heaters.

The beauty of the finished pieces and the imagination behind some of the design work is all the more remarkable given that Andy, 36, did not train in art and sculpture. He does have one qualification – an E in GCSE art – but it ends there.

“I’ve sold firepits all over the world and I’ve sold to royalty, so I think I can call myself an artist now,” says Andy.

“Drawing is about being self-critical. If I have to draw something and rub it out 50 times, then I will. I won’t accept something that’s not right. I do a lot of googling and doodling to get my inspiration and tattoo art can also be a good source of design ideas.”

His first design was “The English Country”, which he made for his own garden in October 2013. After he had had the idea, everybody told him “you can’t do that” or “you’re not arty” or “you can’t weld” – so he sourced the steel and did it.

At a party shortly afterwards, one of Andy’s friends put a picture of the fireball on Facebook – and it started going mad. So many people were asking where to find one that Andy set up a Facebook page that night for people to get in touch with requests. Andy’s wife, Vicky, says: “It was a terrible night’s sleep. His phone just kept going off all night.”

Fortunately, when Andy bought the steel ball for his own firepit the minimum order was five units, so he had four more with which to create new designs.

The balls cost $5,000 and had a three-month lead time, so Andy knew he would need to buy more fairly quickly if he was going to meet the incoming orders.

His first sale was to a pig farmer in Lincolnshire, who took an English Country Ball and an Africa Ball – inspired by Andy’s travels to South Africa, where he spent a month during his Nuffield Scholarship.

He had completed his Nuffield report on the topic of developing alternative incomes on farms. He describes this as “a real turning point”.

As well as a month in South Africa, he spent a month in Australia, visiting people with diversification businesses on farms and interviewing them about their successes and challenges.

“I spoke to them about what makes a successful business, a successful person, what issues they had had, whether they had overcome them and how,” says Andy.

Diversification is not an alien concept to him, though. He had already set up a livery business, workshops and storage units, as well as clocking up business miles outside agriculture – in double glazing and servicing fryers for Burger King – prior to his travels.

However, Andy feels that the lessons from his Nuffield Scholarship have been really useful in his latest venture.

The Firepit Company dovetails well with Andy’s “day job” as a duck farmer. He can finish his work with the poultry (which he produces under contract for Gressingham) by midday and then work on the sculptures.

In fact, the ducks were an early diversification move from Andy, who took on his grandfather’s arable and pig farm. “It started with an article in Farmers Weekly about Gressingham wanting more farmers,” he recalls.

“I decided I would speak to Granddad about it and I thought he would be keen because he always said ‘you can never build too many sheds’. When I brought it up, he showed me that he had folded the same page over to discuss with me.”

Andy now has 28,000 birds on the ground at any one time. He rears them to between five-and-a-half and six weeks, as a member of Gressingham’s Waitrose group. On the farm, Andy has one full-time employee; he has six full-time employees as well as a part-time member of the team at The Firepit Company.

Made of 6mm steel, the fireballs start as two hemispheres and are welded together before the drawing and sculpting begins.

Andy now bulk-imports most of the steel as container-loads from China to keep costs down. The fireballs come in varying sizes – from 650mm through to 1,400mm – and Andy also produces firepit bowls, made from one steel hemisphere.

He still draws the design (standard or bespoke) on most of the balls himself.

Once the outline is complete, the ball goes into the workshop and the sculpting is done with a plasma cutter.

This can take a couple of days, depending on the intricacy of the drawing, before the ball is ready for the finishing and then left to patina.

“Patina is Latin for rust – people don’t like the word rust,” says Andy. “We say they have an iron oxide finish.”

About 90% of orders are for bespoke designs, but customers can also choose from the “Andy Gage Collection” of firepit styles. Andy has created a lot of custom-made pieces featuring people’s pets or favourite places.

Sport is also quite a common theme – rugby and shooting are popular.

Only two requests have been impossible: one customer asked for a Formula 1-themed firepit, which wouldn’t work as a fireball because everything is so low-profile – nothing would give height to the silhouettes; and one customer gave the brief “it’s a wonderful life”, which was the one request that totally stumped him.

Andy estimates that there are now between 700 and 800 firepits in gardens across this country and beyond. They have been bought by individuals, pubs, schools and the armed forces, to name a few.

As well as selling the firepits, Andy hires them out for events and parties – three could be found at Glastonbury Festival and one was recently at the Oval cricket ground.

And they work without fire, too: Andy sells them with LED lighting so that they can be enjoyed the whole year round.

The Firepit Company’s success was ignited by an appearance at Chelsea Flower Show: in 2014, it took a stand and was nominated for the Garden Product of the Year award.

The company returned last year with a bigger presence: the 2015 show cost Andy £18,000 to attend, including staff wages, accommodation, the pitch fee and the set-up. It paid off, with more than £76,000 taken at the event and a media whirlwind that followed.

In 2014, Andy’s fireballs reached the front page of The Telegraph, and at the 2015 show the producers of Love your Garden with Alan Titchmarsh approached Andy.

In its first year of business, this fiery diversification achieved a turnover of £290,000. In the third quarter of 2015 (July-September), The Firepit Company’s turnover was £160,000 – and this was before the Christmas orders flooded in.

This success has not gone unnoticed and other companies have followed suit, but Andy is not concerned as he has plenty of other ideas on the drawing board.

He would like to expand into other types of outdoor sculpture as well as water features and he is working on an exciting new style of firepit, which will be unveiled at Chelsea Flower Show 2016.

Andy says that once he has one diversification up and running, he normally starts planning the next. But perhaps, now that he has found an idea as “hot” as this one, it will occupy his time for a while yet.