As the lorry driver expertly lifted our new fuel bowser off his gleaming machine and dropped it oh-so-gently 20 yards away, just outside the barn, two things struck me.

First, that I’ve just got to get one of those radio-operated Hiab cranes and bolt it to the front of my drill.

And second, that this new bit of kit is hugely significant; for the first time in 60 years, we have a purpose-built harvest refuelling machine.

In the early days, five-gallon drums and a large galvanised funnel were used.

Among Dad’s slides there’s a picture of me in the late 1960s, sitting longingly at the controls of a parked-up Senator, and lined up next to the fence in the evening sunlight are multiple Castrol tins and Add-F drums. Proper recycling, you could call it.

All hands to the pump

The morning routine of filling them from the main farm tank, carting them out to the field in a grain trailer, and then carefully pouring them into the combine’s tank didn’t leave much room for error at any stage.

A second-hand hand pump (the back-and-forth metal-flap ones) gave everyone’s biceps a good workout on a summer morning – but at least this “new” system was less likely to douse you in red stuff – no popping home for a shower in those days. 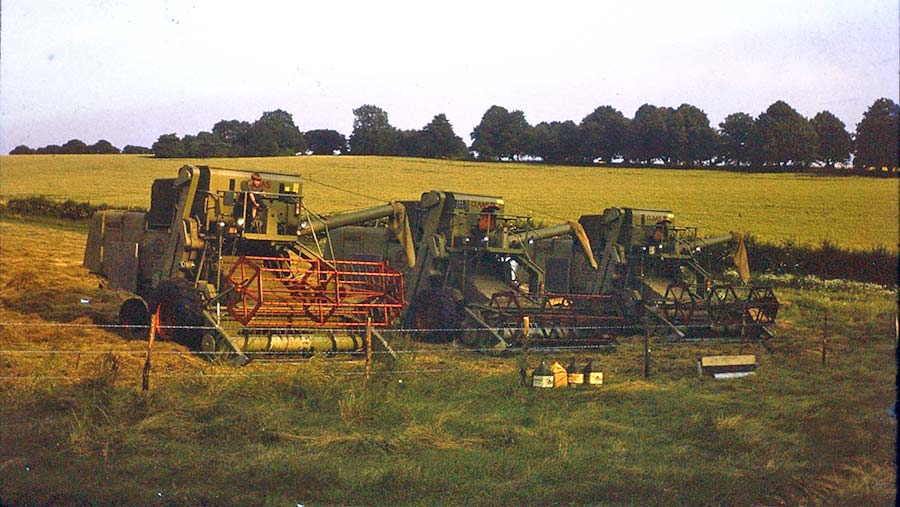 One morning in the mid-1980s, the “second-hand” bit came back to bite us, as the brand-new Claas Dominator stopped dead in the barley.

The man from Mercedes was summoned, and he emerged from the claustrophobic engine bay with a wrecked diesel pump.

I never did find out who paid for its replacement, but a smart new particle/water filter was soon fitted to the diesel trailer.

I got fed up with hand pumping by the time we switched to New Holland, and a 12V pump was plumbed in.

Not long after that, there was a creaking and a cracking, and the pallet dropped several inches through the bed of the now very old trailer. Luckily, it was in the yard being filled at the time, but its time was up.

The replacement this time was a 150-gallon single-skin towable tank, perfect for going behind my truck, but not specially designed for diesel transfer.

After a couple of hours of my hammer-based workshop skills, it had the 12V pump, a battery holder and a filter mounted on the back.

It has worked well for many years – although I did find that replacement cheap 12V pumps from eBay can start emitting smoke after five minutes of hard work.

Not a lot of fun in the middle of a tinder-dry stubble. And the lid’s a bit warped and the tyres are a bit iffy.

Environmental legislation has administered the coup de grâce to that old machine – and I’ll admit that it’s not a moment too soon.

My shiny new bowser is double-skinned, with pump, filter and hose all plumbed in by someone who knows what he’s doing.

Somewhere under the multiple stickers is a lovely bronze-green paint job. It’s big and, thanks to the bunding factor, actually holds less than the old one. But, at last, it’s legal.

The driver origami-ed his crane into position, and headed off back to Morecambe. We rolled the bowser into the barn and locked up – perhaps more diligently than usual.

I made my way indoors to find cheap Hiab knock-offs on eBay. Chinese-built and one-fifth of the price. What could go wrong?