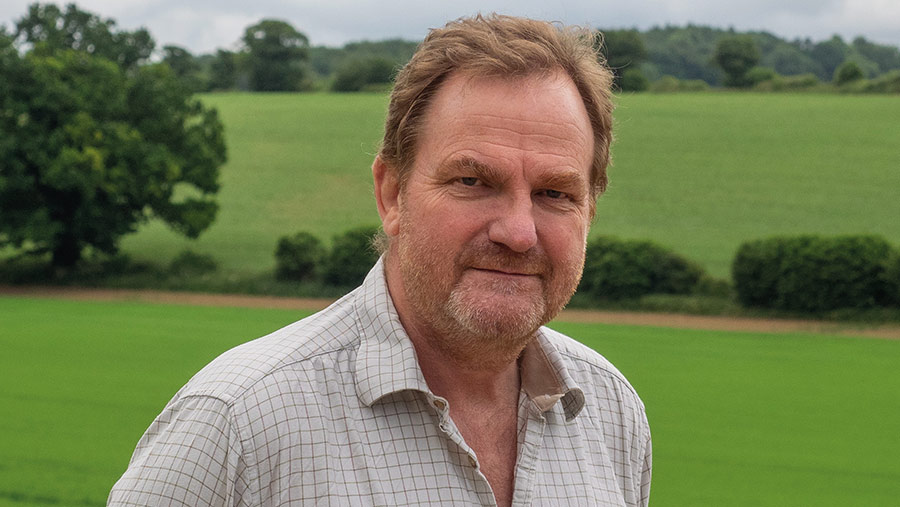 I had a bit of grumpy moment on Michaelmas Day.

There should have been great rejoicing and celebrations to mark the thirtieth anniversary (or “thirty-year anniversary” as young people tautologically put it) of Dad handing over the reins of Manor Farm. But it didn’t turn out like that at all.

The day started well, with a brief ridge of high pressure creeping in to give us what was promised to be a perfect glyphosate-spraying day.

By the time the dew had dried off (and with glyphosate being the price it is at the moment, you need the conditions to be as good as possible), the wind had crept up a bit, but was still within my acceptable limits – and I’m the man who will abandon spraying on gusty grounds far too readily.

There was just one more 60-acre tank to do, on the nicely emerging blackgrass in White Hill – due for winter barley, and then all the winter stubbles would be ready for the Horsch.

The sprayer had filled up with water overnight, the vital wetter was ready and plentiful, and the last precious cans of glyphosate were on the cusp of being unlocked from the newly fortified spray store.

I had my 15-digit access code ready, I’d passed the retinal scan (which was surprising after several days pressure washing the combine and getting eyefuls of grit) and the fingerprint lock had agreed it was me trying to get in.

Just then, a large shower, which had brewed over the Brecon Beacons and set off south-east, arrived in central Hampshire.

It was big, it was heavy, and it was quite unnecessary. I would like to say it was unforecast, but the weather muppets had indeed said “rogue showers” were possible.

I made myself comfy on a stack of 20-litre wetter drums and had a bit of a quiet rage.

If I didn’t get the glyphosate on today, the next weather window wasn’t due for many days. Add on a few more days to let the stuff get to work, and we’re heading rapidly out of the sensible drilling date for winter barley.

The last thing I need is another crap crop of winter barley. (I’m not saying the off-the-combine price of this year’s terrible Tower was low, but it should have been paid in groats.)

I mentally surveyed the farm. The seed barn was conspicuously lacking in seed of any sort. And the fertiliser tank was barren, too, awaiting some vital nitrogen at a price which – rumour has it – is going to have us all gasping for breath.

Now, we farmers are good at handling “Oh, for goodness’ sake” moments – the late lorry, the burst pipe, the cattle out, the blood blister, anything on Countryfile – but this was different.

It was a “sod it” moment; let’s not drill anything. Let’s take 1,600t out of commodity production. It’ll be yet another “give ’em what they want” moment: Let’s farm anything but food.

Luckily, it didn’t last. I headed indoors just as the sun came out, checked the AHDB futures for May 2022 (what a lot of groats) and had half a dozen Hobnobs. The forecast improved. The world felt better.

We did have a small evening celebration. We cracked open a bottle or two, and the Muscle brought home something called a “doner kebab” he bought on the way home from his new job.

We laughed till we cried at the sight of four dogs sitting in a row, stunned that humans could eat anything that smelt like rotting sweaty socks. Mind you, I’m with the dogs on that one.