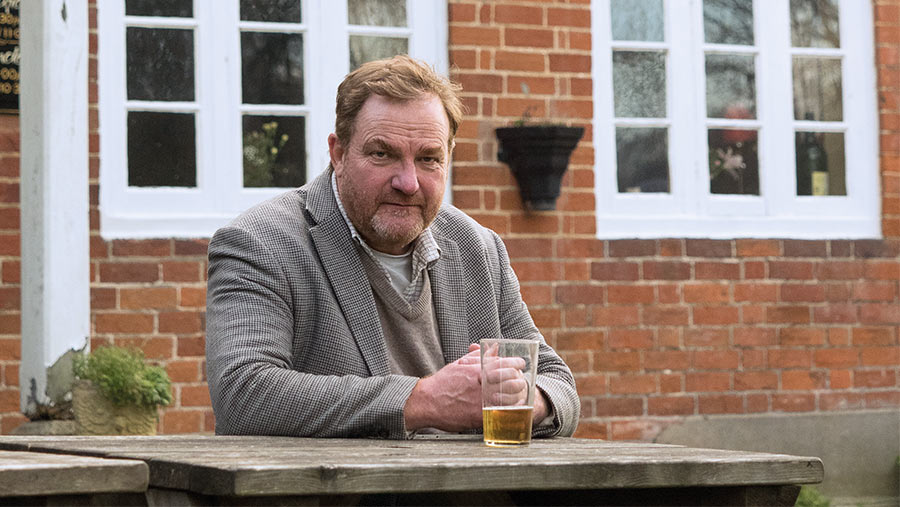 It was hot June lunchtime. Too hot for any farm work, so trivial office jobs beckoned.

“Guess what,” said Hazel, sitting at her computer in the west wing. “According to Facebook, the BBC will be doing a live broadcast at lunchtime – from the Flowerpots.”

I glanced at the clock: I had 10 minutes. Well, I’d forgotten how fast I could move. I was out of the office and grabbing my truck keys before you could say “Jo Brand is as funny as athlete’s foot”.

But did I have time to find my “BBC – enemies of the people” banner? Not really. Or my loudhailer, so I could interrupt the live broadcast with pro-Brexit slogans – a bit like that weapons-grade idiot who ruined all the interviews on College Green? Nope, no time to find it.

I pulled into the car park full of devious intentions. Unfortunately, and rather mysteriously, Sian the manager was one step ahead of me, arms folded, blocking my usual route. “Park there, and be quiet; we’re on air in a few minutes.”

I huffed and puffed for a minute or two as I parked, but just as I’d finished, the charming BBC producer jogged across the tarmac to apologise profusely for any inconvenience.

“Oh, er, gosh, um, no problem at all, lovely to see you…” I mumbled rather pathetically, turning into Hugh Grant, although my recent DIY buzzcut hair was somewhat less than floppy.

But as I walked to the pub itself, my resolve steeled. I’d tell the loathsome BBC what I thought of them, oh yes. (Now tuning into John Major).

“Come and check out all the changes we’ve been making during lockdown,” cried Dave, Sian’s other half, appearing out of nowhere, and I was whisked away to check (using legal and social-distanced means, of course) that the little space “belonging” to me and neighbour Robert every Tuesday night had survived the sledgehammer and the mass outbreak of RSJs. Indeed it had.

The new colour scheme was a bit “meh”, but after a couple of pints of Perridge you’d hardly notice it. But by now I was beginning to think there was a plan afoot to keep me away from the cameras. Surely not…

So, with the guided tour done, I managed to break free and headed for the “takeaway” beer queue that was to form the backdrop to the live interview – only to find myself, bizarrely for a Tuesday lunchtime, standing next to the vicar.

Now, the Good Lord and I don’t trouble each other much, but his new rep in the village “fills the doorway well”, as Granny Flindt used to say about good coppers.

In the end, while Sian coolly and effortlessly spoke live to camera about trying to make the best of lockdown, I stood meekly at the front of the queue in the background, with an uneasy feeling that a greater power was supervising my behaviour.

Ninety seconds later, it was done and dusted. There were smiles and thanks all round, and no one behaved like spoiled schoolchild – which, in the end, was for the best.

I drove home clutching a four-pint takeout of Perridge Ale (well, it would have been foolish not to). It was odd to have been so effectively corralled down there. It was as if they’d been warned. Hazel was saying nothing.