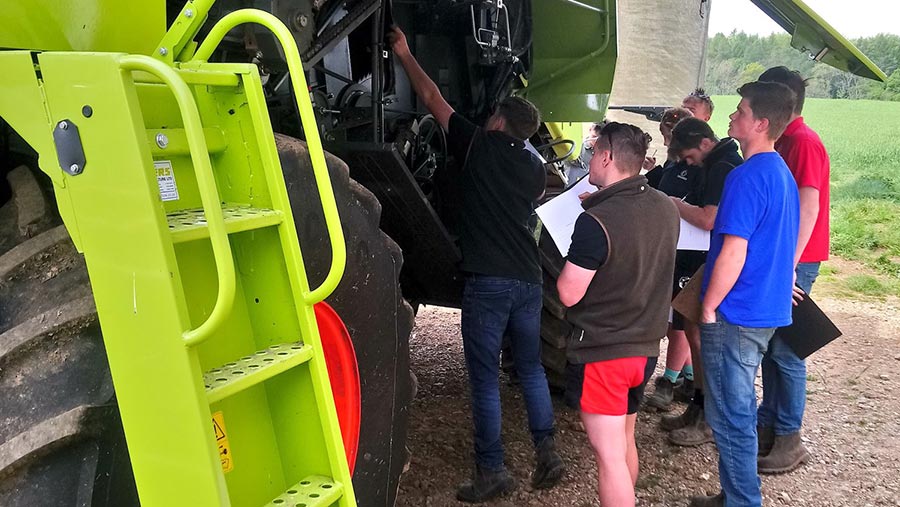 When I got the phone call from the local ag college, asking when their engineering students could come and inspect my combine, I got a bit confused.

It was bad line on a windy winter day, and we were outdoors mending a gate.

At first I thought it was the dealer wanting to do the winter checkover (“Claas engineers”/ “class of engineers”) and couldn’t grasp why there would be a dozen of them.

Even once we’d established who was talking to whom, I still couldn’t quite remember volunteering my combine.

But, what the heck; I was an Ag Eng student once, and I said I would be delighted to help out.

I was a bit nervous on the day, waiting for them. I’d got the Tucano out of hibernation, attached the table, and parked it up in the yard with its skirts up.

That left me a moment or two to ponder the times I’d gathered with a bunch of Ag Eng students.

Forty years ago, for instance, there was a group of us, on a bleak open field overlooking the Tyne valley, playing with cabless tractors and conventional three-furrow ploughs.

It was so bleak and cold that the many international factions in the group who usually never acknowledged each other (the pro-Khomeini Iranians, the anti-Khomeini Iranians, the Israelis, the Nigerians, Dave the Scouser) were, for a moment, united in their misery and disbelief at how they ended up freezing to death on a Northumberland hillside.

The smart Sparsholt minibus interrupted my nostalgia. Out climbed two lecturers and a pile of students in compulsory dealer boots and shorts; mid-Hampshire in May is a tad warmer than Nafferton in November.

I gave them a quick briefing: the Tucano had only done one season, my first Claas in 26 years, I like it but I’m not in love with it yet, the grain tank lids are silly, it beeps too much – all that stuff.

The lads (no lasses, and, indeed, no Iranians or Israelis) were given clipboards and pens, and told to get to work: “Find some faults!”

I suddenly felt old. For me, climbing an access ladder is a job that needs planning and careful execution. (New hip, knees going, grip not what it was.)

If I need to roll underneath, I have to find one of the farm yoga mats (from more optimistic times) and notify the authorities in case my back goes while I’m down there.

Life is different for youth. They descended on the Tucano like a plague of locusts, climbing, rolling, prodding, poking, hanging on belts and chains.

They rolled underneath like a stunt team, they climbed all over the top like a circus act. And all under the watchful eye of the lecturers, keeping it strictly safe and legal.

There were cries of delight at a weep of oil, a pulley with bearing play, and chopper blades showing signs of battle with Hampshire diamonds.

One lad sidled up to me and asked if I just happened to have a list of faults. He will go far.

My sprayer beckoned, so I left them to it. I had a text thanking me as I was trundling through the barley at my usual sedate 10kph.

I replied that I looked forward to their results – it will be interesting to compare them with the official Claas winter checkover.

In fact, I might make it a regular thing, even if it is a bit overwhelming. I’ll need my comfy chair and slippers to read their report and recover. And some cocoa with my Hobnobs – when I’ve had a nap, of course.