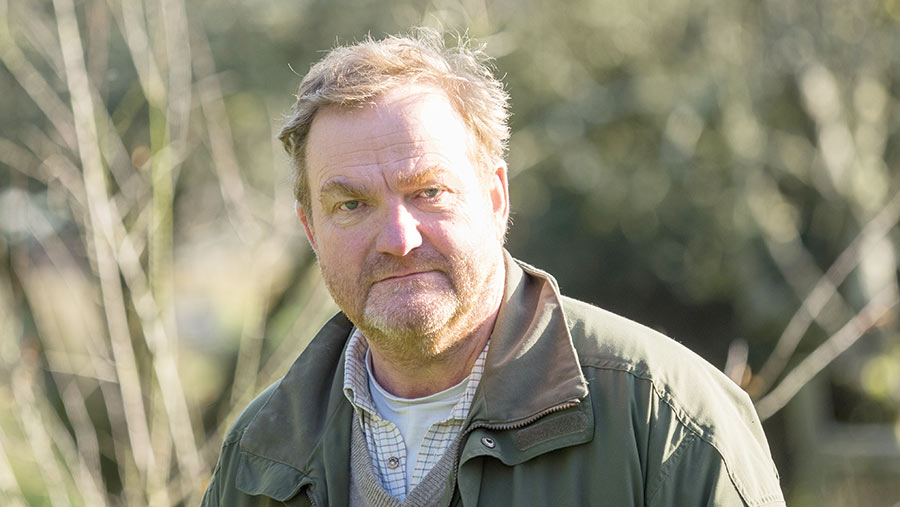 It didn’t seem quite right to stand in a field full of majestic oilseed rape and curse loudly. But I was in Bungalow field, in early January, and I was cross.

I was just finishing my long yomp over the three oilseed rape fields, trying to decide what to do with them.

It’s a heck of a hike getting to the Hangar, Kilmeston Road and Bungalow, situated as they are in an 80-acre group at the west end of the farm, through multiple locked gates and pastures full of helpful sheep.

My first stop was the Hangar: 21 acres of chalk, not really the best field for OSR in a normal year, but it needed a break crop after lots of spring barleys, and it suited the plan to lump all three fields together into a ‘one-sprayer-tank-sized’ block.

It was sown perfectly, resown when beetled, but still looked terrible from a distance. I confess my hopes weren’t high as I started unlocking the gate to get in.

This gate weighs a ton, has one hinge – at the bottom – and baler twine at the top, and is slowly vanishing under vicious and malicious blackthorn bushes. It’s a nightmare to open.

And after all that, all I could find was a smattering of OSR plants, shredded and pathetic.

Only a half-acre of heavier land near the gate looked respectable. Not much of a decision needed there. I fought my way back through the blackthorn, and headed back across the pastures to Kilmeston Road.

Stick or rip up?

More locked gates to negotiate – ones that swing shut just after you’re turned your back on them, just to amuse the sheep even more. The heavy/light land differential continued here.

Just under a third of it looked anything like decent, at the top on the clay, and at the bottom on the gravel. The middle chalky section looked even worse than the Hangar.

Hmmm, this was a bit more of a dilemma. Re-sow the middle with spring beans, (and enter the world of mapping madness) and then find, after a long winter fighting pigeons, that it would have been easier to rip up the whole lot?

Mentally redrawing the farm map, I decided that putting all of both fields into spring beans would probably be easiest – or perhaps spring barley again.

A great weight lifted as I made the decision. The last one to check now was Bungalow, accessible only through the hedge at the southern end of Kilmeston Road.

We used to go by road through the village of Kilmeston itself, but that was in the days of Ford 5000s and before the arrival of reverse-gear-free Audi Q8s.

The thing about Bungalow – apart from the fact that it’s the least accessible field on the farm – is that it has 10 corners, and is 12 acres, and is the closest thing to urban-fringe farming that we’ve got (put SU592266 into Streetmap if you don’t believe me). And this year, it has the best-looking crop of OSR you ever saw.

Which is why I stood in the middle and swore. A whole spring of pigeon chasing, long-haul tractor driving, gate unlocking and sheep dodging beckons, not to mention combine side knife assembly and sieve changing come the summer.

And all for 12 acres at the far end of the farm, and a thoroughly inconvenient 20 tonnes of crop if all goes well – but probably less.

Any farmer knows that there’s only one thing to do in these circumstances: procrastinate. I’ll have another look in February. I’ll know for sure what to do by then. Or not.