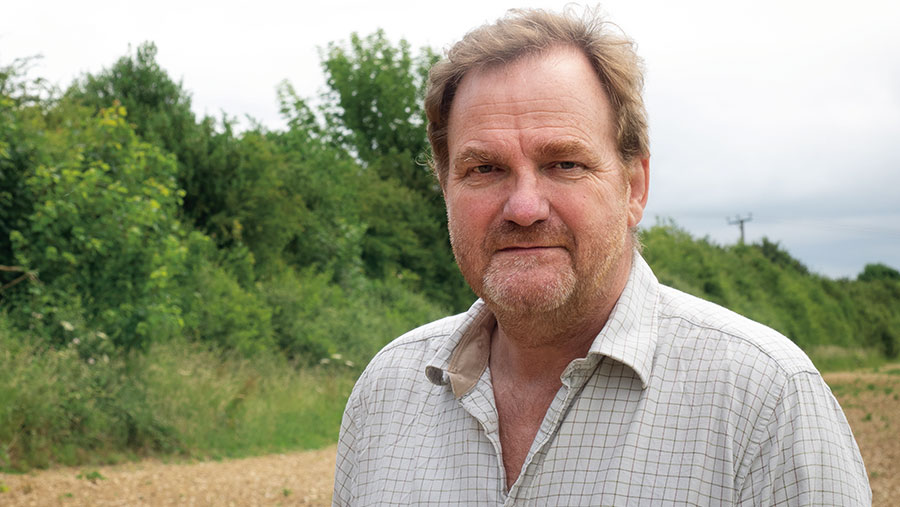 It isn’t often that we farmers have to make split-second decisions. True, the livestock can occasionally provoke a bit of quick thinking by drowning/dying/getting out, but that’s why I leave that side of the farm to Hazel.

Most arable choices can be made over a cup of tea and some Hobnobs – and even then, that can seem a bit hasty.

Unfortunately, as I stood on top of my New Holland TC5070 combine, watching smoke coming from at least two separate locations in the engine bay, it was pretty obvious that putting the kettle on and raiding the biscuit tin was not the way forward. Just for once, time was short.

Choice A: use the extinguishers. I keep two types: the powder one, perfect for flaming bearings but guaranteed to turn a single chaff fire into a dozen stubble fires, and the eight-litre hand-pump garden sprayer, perfect for a low pressure moistening – but unlikely, I thought, to succeed in this case.

Choice B: abandon the combine to its fiery fate, along with 66 acres of fabulous Tower winter barley (uncut, swathed and baled).

But if the flames were to start in the field, and the howling hot southerly wind got hold of them (“Hottest day EVER!” according to the weather muppets – but where they sourced 14.5 billion years’ worth of weather records always baffles me), the inferno would sweep north to our boundary, across the narrow road into Murph’s uncut wheat (in a field named Burnt Acre), up to his grass airstrip (“Bramdean International Airport”), and in all probability make short work of his pride and joy – a Cessna. And his new house, too. And then on to who knows where?

Which left choice C: get back in the cab, select third gear and go like foxtrot to some green crop. Five minutes later, I was in the unripe beans, checking the engine bay again: still only smouldering and smoke. “To the yard with its hose pipe!” I decided, and we crashed on through my winter beans.

Charlie the postman was blocking the exit from the beans, and waved cheerfully as he went about his business.

Now, we adore our selection of Posties (even the anti-Brexit Pole with whom I have long, good-natured rows every time he gets our round – those “downstream” must wonder where he’s got to), but I stepped out on to the platform and suggested loudly to Charlie that he move on hop-like-a-bunny.

Mind you, the actual words I used might justify a formal letter of apology.

After a short trip along a just-wide-enough bit of lane, then through about a hundred yards of green-tinged spring barley, I reached the yard and its standpipe.

Two hours later, the New Holland’s engine bay was as clean as it was the day it left the factory. Every single bit of chaff, every twig, every leaf, every branch had been ruthlessly hosed out – even the ones that had survived a decade of annual washouts.

The engine was gently steaming and I was soaked through to the skin, having spent half an hour in the grain tank wielding a reasonably high-pressure hose through an access hatch.

The air was heavy with the smell of steam, slightly scorched wheat and general relief about what might have been.

We had an early tea break to let the adrenaline levels drop, and by four we were back romping our way through the magnificent winter barley – panic over, normal service resumed.

I wondered where we’d go after the winter barley: Kilmeston Road field or Bungalow? It’s a tough choice; hope we’ve got enough Hobnobs.