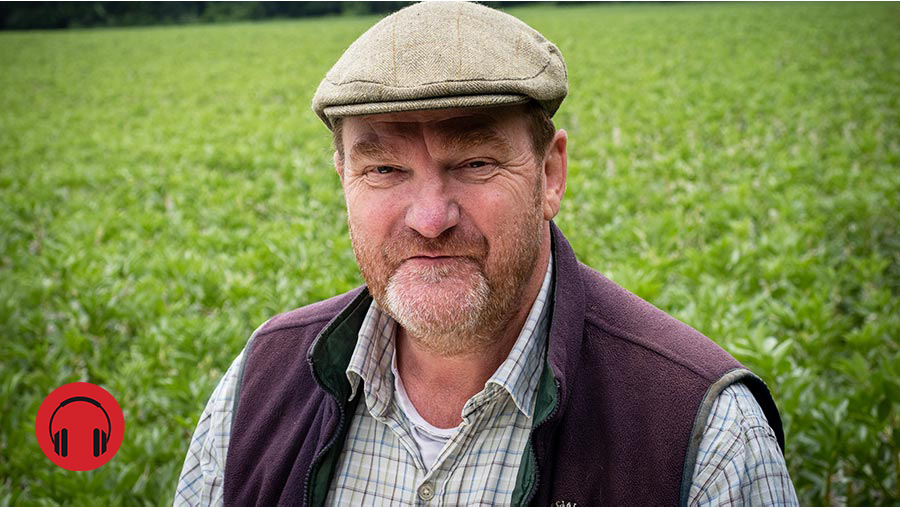 Listen to Charlie Flindt read his column or read the text below.

Farmers Weekly · Flindt on Friday: The curious incident of the farmer in the Fens

Many farming skills transfer seamlessly to the outside world – decades spent doing a bit of plumbing, rewiring or building can always be handy.

But there’s one rural skill that I never thought I’d use anywhere else but on the farm – until now.

And that’s the art of pretending nothing has happened – when in fact you’ve just done something unbelievably daft: tripping over the farm hoover pipe, falling into a ditch, clouting your hand with a hammer – all that sort of thing.

Once you’ve casually scanned the horizon for anyone who might have seen you – then, and only then, can you curse or cry.

I was outside a hotel in deepest Norfolk, where the trig points celebrate 4m. It was well past midnight, and I had just been dropped off at the front door by the organiser of another fantastic dinner.

We’d said our farewells and thanks, and his dodgy pickup vanished into the dark Fenland night. “Right,” I thought. “Bedtime.”

The thing is, the hotel was in complete darkness, too. Not a sign of life to be seen. I tried the doors – they were locked. “Gosh,” I thought. “This could be awkward.”

I had the cardkey to my room; surely there was some sort of slot for the card that would let me in. Nope, nothing.

There was a sign in the window, with a telephone number – I could just about make it out, and the words “for emergency use”.

Did me being stuck in the porch in the middle of the night count as an emergency? Hardly.

Perhaps I could ring the dinner’s organiser. I could call my nearby niece, who had originally offered me a spare bed in exchange for reading bedtime stories.

Actually, I couldn’t ring anyone; my phone was safely packed away in my hotel room.

I had my car keys, though. I haven’t slept in a car since 1980, and I was bit more flexible back then. And I cried all night – it wasn’t a good party.

Perhaps I could drive back to Hampshire – I’d only had a pint-and-a-bit. I’d get my things forwarded later.

A chill gust of wind blew off Well Creek (sounds like how my back would be after a night in a car) and over to the hotel. It made me stop and think.

“This is absurd,” I decided. “I know things are different up here, but no hotel locks out its punters for the night. There must be some way in.”

I set off round the outside of the building, carefully checking every single door I came across.

Mind you, I was worried about finding one open, but then setting off all the alarms. The last thing I needed was the full might of Norfolk Constabulary swooping down on me on their bicycles.

Tucked away round the back of the hotel (if truth be told, it was actually right next to the main car park and bleeding obvious to anyone with an ounce of common sense, but I won’t mention that) was a well lit door. Well lit – and well covered by CCTV cameras.

If the hotel staff happened to check the footage the next day, they would have seen a debonair farmer (in new shoes and suit) strolling nonchalantly and confidently into the hotel without a care in the world.

The fact that his heart was going ninety-nine to the dozen and that he was still in a cold sweat of panic – and it took him an hour to calm down once finally snuggled under the duvet – will, I very much hope, have gone unnoticed by the camera team.

All those years hitting my hand with a hammer weren’t wasted.