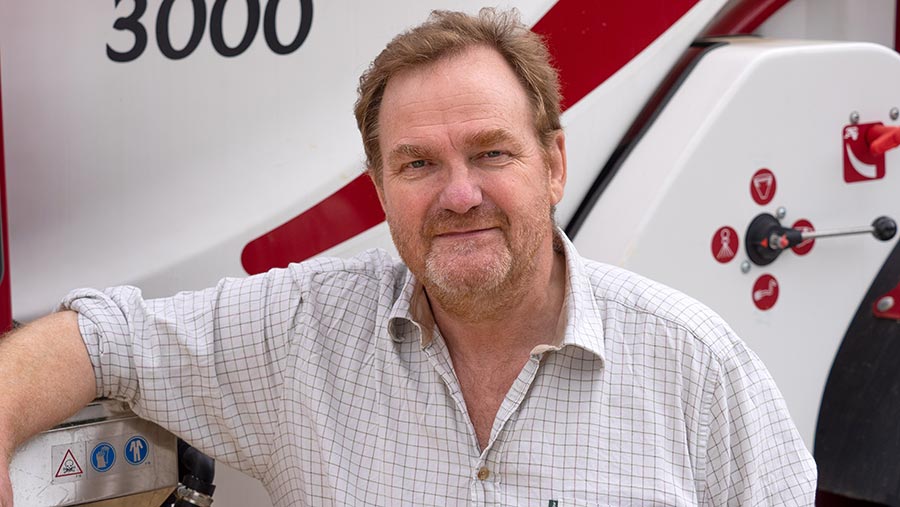 It’s funny to think that weekend work used to be a rarity. Only at harvest, or if drilling was running late, would Dad check if the men were available – and summoning one of the old boys involved a walk to the cottage and a knock on the door; Ernie had no phone.

But as a rule, the old brown doors of the tractor barn were slid shut on Friday night, and they stayed that way until 07:52am on Monday.

A generation on, it matters not if the calendar says Saturday or Sunday. I can, if I want, grab my keys, unlock the yard gates (those late-1950s barns are too small for today’s machines), and head out.

The first Saturday in March was a perfect example. Thanks to neighbour Robert’s help, the spring barley was in and rolled in February. Most had even had the seed-bed dose of liquid fertiliser.

There was one key job left to do: the pre-emergence spray. After all, there’s no point going through the kerfuffle of growing spring barley if you don’t use it as a chance to give the blackgrass a good going-over.

And therein lay the slight issue. Farming jobs can be graded based on the reaction you get from National Trust visitors as they set off on the walk round the estate, clutching their fib-filled “guide” to the hamlet.

You can guarantee a thumbs-up if you’re haymaking, ploughing or combining, because these are instantly recognisable as good, wholesome farming activities, even to Countryfile fans.

Sowing can be complicated, because, while no one (except Dame Helen Ghosh) expects to see a man hand-broadcasting seed from a sack, modern high-speed min-till kit can be a bit intimidating close-up.

As for spraying, well, let’s say that nothing provokes an ungainly sprint for cover, or a melodramatic handkerchief over the face, or some creative hand signals, like the sight of my trailed sprayer in action.

Which brings me back to that early March Saturday. The job was there to be done, the ground was hot and wet (so a bit of a hurry-up was needed for “pre-em” to apply), and – most importantly, the Six Nations was on a break.

The BBC live sports coverage had resorted to the All-Rutland Ladies’ Egg-and-Spoon races from the Luffenham Sports Centre (hosted, of course, by Clare Balding), so the sofa didn’t beckon.

The sort of yellow that provokes angry messages to National Trust HQ, or The Guardian, or Chris Packham’s all-powerful Twitter feed (indistinguishable these days).

It may be relatively cheap, and it may work quite well, but on a busy warm March Saturday it was a PR disaster in the making – especially as the wind was beginning to make itself known.

So I thought I’d try a bit of liquid N first, to test the conditions. By late morning, even the dense drops of N35(S) were enjoying a bit of a wind-borne detour on their way down to the ground, and that was my cue to fold the booms, trundle home and lock the gates back up.

I generously gave myself the rest of Saturday off, with a clear conscience.

There was some vintage David Niven tucked away down the Freeview channels, so I lit a fire, made tea, grabbed a duvet and a cat, and hit the sofa. A traditional weekend after all.