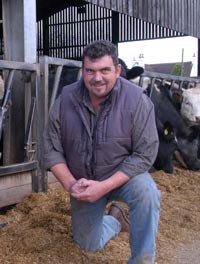 Simon Middle’s farming story is a tale of triumph in the face of adversity. Michael Charity meets him

“I must be doomed, doomed!” jokes farmer Simon Middle.
He could never have envisaged the trials to come when he took on a council holding tenancy at Sandhurst in Gloucestershire 22 years ago.

Over the years, he has expanded from 130 acres by leasing an additional 357 acres, successfully diversified and grown his business with his wife, Louise.

But wind the clock back to October 2000 when life was ticking along nicely at Mussel End Farm and a huge explosion rocked the nearby Cleansing Service Group’s treatment plant. Rain got into waste containers and a violent reaction resulted in a fireball blast and giant toxic cloud. Residents had to be evacuated, the Environment Agency banned all soil disturbances for several months and Simon had to write off 28 acres of fodder beet just before harvest – a major blow to his finances and animal feed plans.

As villagers and farmers struggled with the restrictions and after-effects of the blast, the River Severn burst its banks, flooding the area to a depth of several feet. The water didn’t get into the farmhouse, but most of their land was under water meaning they had to search high and low for stock feed.

Just as things were getting back to normal and, with the 2001 winter almost behind them, they were dealt another cruel blow – foot-and-mouth. Simon lost all his livestock: 147 cattle, 580 ewes, 37 rams, more than 1000 lambs and 34 pigs.

“To watch your animals being destroyed like that is almost impossible to describe – years of husbandry gone in days, hundreds of man-hours for nothing. It was so hard to come to terms with.

“We were able to restock the farm at the end of August of that year, but it took us three more years just to get back to where we were before foot-and-mouth hit the community,” recalls Simon.

The loss of the livestock had also hit a diversification the couple started in 1999 when they created a farm shop and engaged the services of master butcher David “Tat” Attwood.

They had been building a loyal customer base for their home-produced beef, lamb and pork. With their own stock slaughtered, they had to find other sources of quality meat. This wiped out their profit margins but kept their customers happy until normality returned.

The Middles went to Wiltshire to look at cattle to restock their farm and, while they were there, Louise picked a few sunflowers from a game cover crop in the field alongside the animals they were viewing.

“She brought them home and, by coincidence, was shopping in Gloucester the next day and saw sunflowers selling in a florist for £1 each. They are easy to grow and we thought this could be a way to supplement our income while we built up the herd,” recalls Simon.


“We planted two acres of sunflowers and sweetcorn and became the first farm to offer these as a ‘pick your own’ crop. We grew seven different colours and people flocked to our Twigworth fields and we also sold them at farmers markets. The whole thing was an amazing success.

“We still seasonally grow PYO sunflowers and sweetcorn but nearer the farm so we can police it. A lot of flowers and corn seemed to disappear overnight but I don’t think it was rabbits.”

Diversification was proving the key to success and the couple decided that their seven-bedroom farmhouse was suitable for B&B. In 2005 they linked with Farm Stay UK and can now speak of repeat bookings and satisfied guests, not only from Britain but Europe, Canada and America.

By 2007 Simon had the farm firing on all cylinders. Despite a 14-hour working day, he found time to chair the Gloucestershire Root, Fruit and Grain Society and successfully took part in the crop competitions.

But fate was to deal him another blow. The floods returned with a vengeance. Vast tracts of the county were under water, and Gloucestershire’s entire electricity supply was threatened.

“I think this was the worst blow of the lot and I had a few moments then when I wondered if I could go on here,” says Simon. “It ruined all our crops and we had to cancel all the B&B bookings. The water was so deep – we had 7ft-high maize and after the water swept through there was no trace it had ever been there. We lost £140,000 in 24 hours.

“I just couldn’t believe it, one minute it’s summer and the next we are under a deluge of biblical proportions leaving us facing financial Armageddon. I didn’t know which way to turn, over the last few years we had come through hell and high water, now we found we were back to less than square one.”

Somehow he found the strength to cope. “It was either that or go belly-up,” he says. He went to see the bank and the accountant and they looked at the butchery and farm shop, the B&B and the farm and they restructured all three businesses and knuckled down to yet another fightback.

Today Simon, who has two children William (11) and Lucy (4), has his optimism back and even more diversifications on the go. “My philosophy is that if you have enough irons in the fire one will always be hot,” he says.

“Today, the butchery side is expanding. With the exception of poultry, which is sourced locally, all the meat sold in the farm shop is reared here and everything they eat is home grown. Self-sufficiency is what makes the whole thing tick.”

The fodder beet contracting business covers 600 acres and Simon has just received planning permission, which will add an extra dimension to his latest brainwave which sees his lambing sheds metamorphose in May into sumptuous settings for wedding and other functions.

When spring lambing is over, the sheds are deep cleaned and turned into beautifully lined marquees until the following year. This makes a valuable addition to the farm income.

“Folk seem to like the rural location with the added opportunity of B&B accommodation, plus we have the farm shop which is useful to function caterers,” explains Simon.

“The planning permission to extend the sheds will allow us more room for lambing and at other times let us cater for more guests. It means we can hold functions such as hunt balls with three or four hundred guests.”

It is all more work, of course, but he seems to thrive on it. “Some people might call me a busy fool,” he laughs, but his enthusiasm remains undimmed and the way he’s adapted is typical of the spirit that epitomises farmers everywhere.