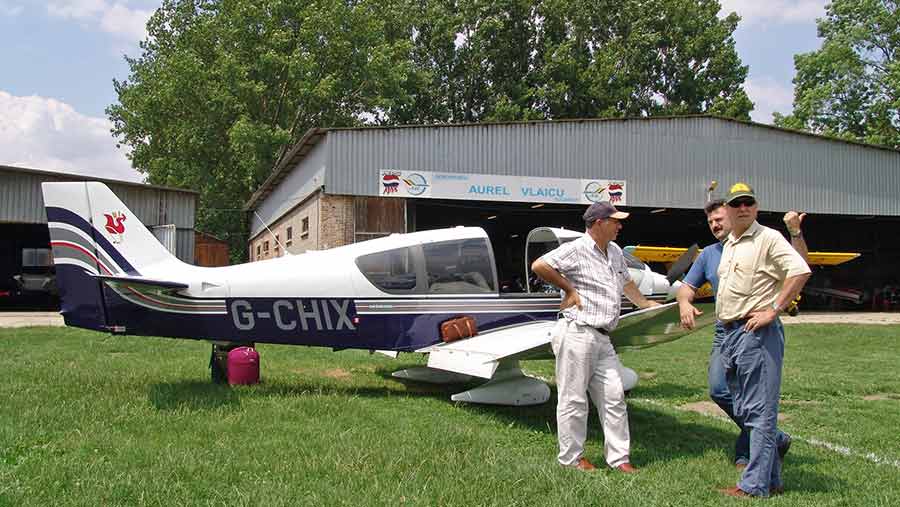 A FFA tour of Romania

Farms are home to an abundance of kit and machinery – although you probably wouldn’t expect to find an aeroplane lurking in the shed.

Yet for many farmers, they are as essential as a tractor and trailer, while others simply love the thrill of being able to escape up into the clouds.

It’s this common interest in aviation which has led almost 400 farmers, foresters, landowners and others whose work is related to agriculture to join one of the country’s most adventurous flying clubs – the Flying Farmers Association (FFA).

As well as sharing mutual passions, members who own their own aircraft, airstrip or both, meet up several times a year for trips to places of interest such as Prince Charles’ Duchy Home Farm, vintage machinery museums and unusual diversification schemes, as well as annual European tours lasting several days. 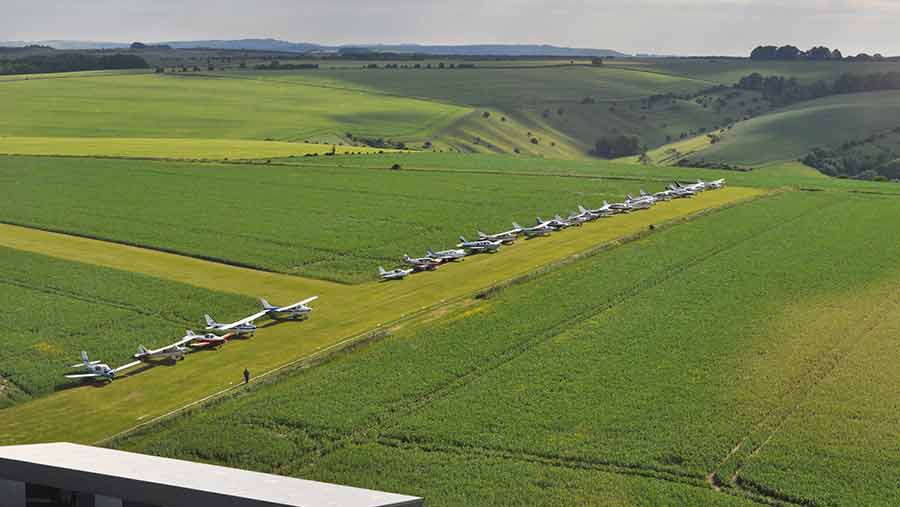 An FFA meeting at a member’s strip near Salisbury

“Once you’re up through the clouds into the blue, it’s just a different world.”
Paul Stephens

“There are those aeroplane/airstrip owners who want a bit of back-up and information about running an airstrip and who need access to our insurance scheme.

Others like to get the newsletters and just keep in contact and we have a core of about 150 members who enjoy the events.

“The flying part is the basis of endless conversation in itself, with every flight being a story and an adventure. Flying entails controlling the aircraft, radio communications, navigation and most volatile of all – dealing with the weather.

“The farming part comprises endless common subjects such as the crops, livestock, politics and again, the volatile weather.

“The great thing is that the two parts, farming and flying, complement each other. A big part of farming is observation – seeing the crops grow, checking on the sheep – and what better way of doing these tasks than from the air?”

But what is it about flying that is so appealing to farmers? “Our members use their aeroplanes for leisure and business,” adds Paul, who grows wheat, rape and potatoes on 365ha near Malton, North Yorkshire.

For the business aspect, there is observations from the air, transport to other farms, going to events such as Cereals, picking up spares for that broken-down combine – all of which can be done in a fraction of the time it takes by road.

“My aeroplane is my Land Rover – it can do everything the four-wheel drive does, except pull a car out of a ditch.

“Of course, there’s another aspect too. Farming can be a very stressful occupation and flying is a great relaxation; you can literally get away from it all and once you are up through the clouds into the blue, it’s just a different world.”

The Flying Farmers held their first meeting in 1974 at a Farmers Weekly drainage event, after the magazine printed a letter of appeal from Surrey dairy farmer Tony Poulson.

He, along with a couple of peers, thought it would be great fun to form a group for like-minded people and about 90 farmers turned up to find out more.

“We were surprised so many came,” recalls Tony, who owns a vintage 1940’s Stearman bi-plane and a two-seater Aviat Husky, which he describes as the perfect farm plane due to its quick take-off and short landings.

“The group has certainly come a long way since those early days. I’m retired now, but I still love flying and I have met some wonderful people through it over the years.

“It’s great for getting away,” adds Tony. “Back then I used to go straight out flying as soon as I had finished milking the cows. I loved my work, but flying was a break from the tediousness of it all.

“I’ve always had an interest in aircraft – my grandfather was in the Royal Flying Corps and my family has farmed in Farnham, which is under the circuit of many aircraft, so I have been surrounded by them all my life.

“It’s a discipline; you have to learn how to do it, but once you can, you never forget. However, it takes time and money.”

Today the organisation has almost 400 members scattered across England, Scotland, Ireland and Wales and, as well as enjoying several UK visits a year throughout the summer months, they also undertake European tours.

The Flying Farmers is probably one of the most adventurous flying clubs in the country, says Paul, who owns a French Robin – a four-seater low-wing plane capable of 150mph (130 knots).

“Over the years we have been to most European countries as well as venturing into north Africa.

“I’ve flown over the Alps, visited Norway, the Black Sea and been to Romania and just before the Libyan uprisings I flew into Tunisia and over the Sahara. 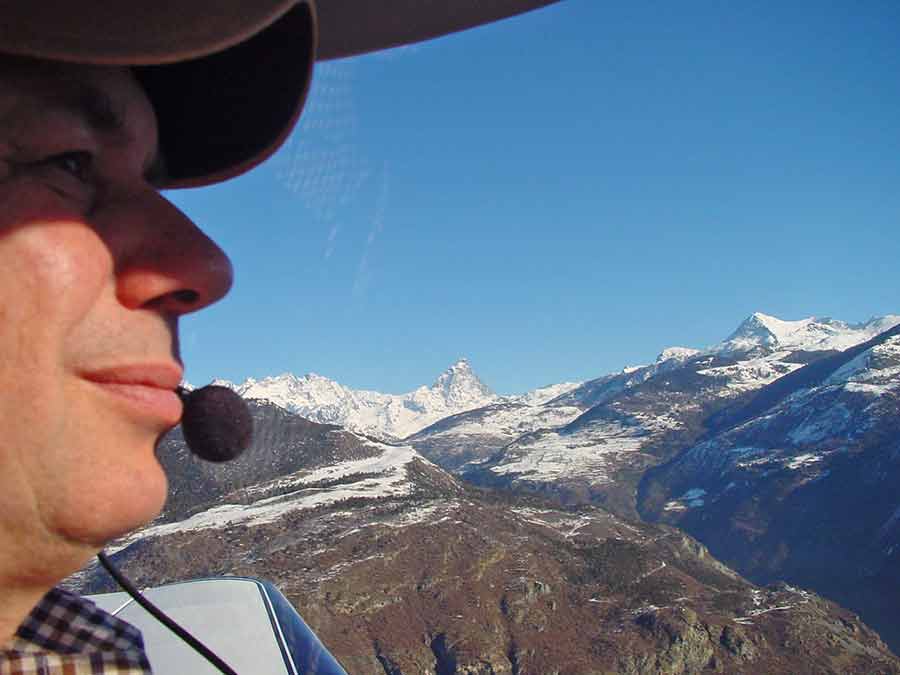 Paul Stephens flying over the Alps

“I’ve also been to Australia. I didn’t take myself there, but I flew around when we visited farmers with airstrips. It was a fantastic experience flying over the outback, where we met arable, sheep and cattle farmers that have their own aircraft.”

Paul has been the club’s secretary for 20 years and is responsible for producing and emailing newsletters, updating the website and keeping all the databases up to date, tasks which he says have become much easier thanks to the advance of technology. 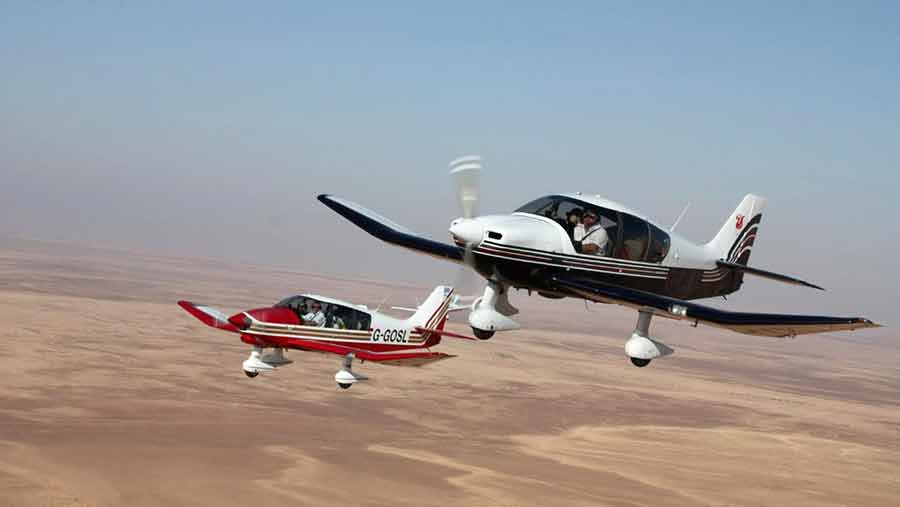 Martin Gosling (red aircraft) and Paul Stephens over the Sahara

Last year he used the information he collates to create a theoretical profile of the typical “flying farmer”.

He would be called Richard, probably be in his 60s, hail from Lincolnshire, own a second-hand aircraft such as a Cessna 182 four-seater and would probably be successful and adventurous farmer who has a bit of grass that he calls an airstrip, on which is a tin hangar, explains Paul.

Paul says he was inspired to learn to fly by his father, an RAF Lancaster pilot during World War Two.

“I’ve seen some very interesting things on the tours and visits – from snail farms in France, cork production in Portugal to turf production in Yorkshire and many other things I have never even heard of.”
Martin Gosling

“In reality though, our members are very diverse; both of the words – farmer and aeroplane – are very broad-spectrum terms.

“The word farmer encompasses all levels of size and standing, from some genuinely hardworking, hard-up hill men struggling to survive, with endless problems, to some very big adventurous farming enterprises with land or livestock scattered all over this country and abroad.

“Aeroplane is similarly diverse, encompassing everything from homemade, lightweight aircraft that cost very little to jet engine airliners. We have many vintage aircraft, microlights, home builds, a few twin-engined aircraft and some helicopters in the association.”

Association chairman Martin Gosling says: “Flying can be a time-consuming hobby – but like any pastime, if you want to do it badly enough, you will make time.”

He is the only member to have been on all the group’s European tours since the first one to France in 1983. He has also flown over Africa, Australia and central America.

“I have always had an interest in aviation, inspired by the heroes of WWII, books, films and stories. I was 34 when I first started; I had never really imagined I would be doing it.

“I’ve had the most wonderful experiences – it really is a fantastic way of seeing the world, and I know I’m incredibly lucky and privileged to be able to do it,” says Martin, a retired arable farmer from Essex who also flies a Robin.

“I’ve seen some very interesting things on the tours and visits – from snail farms in France, cork production in Portugal to turf production in Yorkshire and many other things I have never even heard of.

“We are a very member-oriented group and rely on members to make suggestions of where to go.

It has been notable over the years that the further afield we plan to tour, the more people are encouraged to go. The organisation and preparation is done for you, so there is no worrying about permits and hotel accommodation.

“It gives an enormous range to our social life – my wife comes too and it’s lovely to be able to share it with her.

“The camaraderie is great. I just get enormous pleasure out of it.”

With an ageing membership, the future of the group is a topic that crops up in discussion, but Paul and his peers are hopeful new members will continue to come forward.

“When we started, the average age was 30s-40s, but today that’s fast heading towards the 70s,” he explains.

We question where we are going to be in 10 years’ time. Some follow in their fathers’ footsteps and join – but it’s amazing how many farmer’s sons do not have the interest.

“But it’s great for forging friendships. It’s always good to meet up with people and there are always three things in common – farming, flying and the weather.”

For more information on the Flying Farmers Association, eligibility and how to join, visit the FFA website.