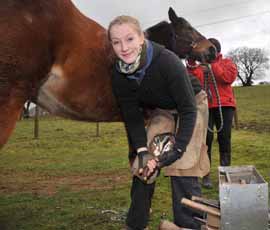 Aliese, a Welsh mare, is so relaxed as farrier Alex Hunter trims her hooves that she is all but keeling over. This isn’t always the reaction Alex provokes from her equine clients, but it is not uncommon.

“I think horses do relax when they see a woman because most have female owners. Men tend to be the vet who gives them an injection or the farrier who yanks their legs,” she says.

Yanking of limbs is not an approach Alex favors. At 5’6″ and of slight frame, she prefers a gentle approach, and it works.

Alex has recently completed a four-year apprenticeship and qualifed as a farrier – a profession traditionally dominated by men – so she can now use the letters Dip WCF after her name.

She is in the early stages of building up her business, aiming to shoe around six horses a day. “I work in and around Ystrad Mynach but cover the Vale of Glamorgan and some surrounding areas,” she explains.

Although she has scars from the odd bite and kick, those with more placid natures seem to remain calm when she is around them. Alex even seems to have the gift to calm horses with reputations for being tense and nervous when being shod.

“I think horses can sense that in general women are more gentle and less threatening; we don’t use brute strength when they’re being difficult,” she says.

Alex grew up with horses and travelled abroad as a groom on the Fédération Equestre Internationale (FEI) driving circuit. She competed successfully in driving and eventing, but admits that she enjoyed a “good hack” more than anything. “It’s a great time for a horse and rider to get to know each other,” she says.

She still remembers the day when she told her mother she wanted to work with horses. “She tried to put me off because she said I wouldn’t enjoy horses as a hobby any longer if I worked with them. In a sense she was right because I don’t have time to ride any more but I do get to be around horses every day.”

Alex served her apprenticeship in her home county of Staffordshire with master farrier, Jonathan Nunn, and excelled in both the practical and theoretical side. “I was the only female on the course so I got a bit of stick for that, but I managed to score the highest marks in my year for my written paper and so was presented with the David Llewellyn Award from the farriers’ training agency, as well as getting first runner-up for best portfolio.”

When she passed her diploma, she set herself up in business as a mobile farrier and was fortunate to secure funding from the Rural Development Plan for Wales. The grant, delivered by Caerffili Cwm a Mynydd, has helped her buy specialist equipment and to market her business.

Alex is one of just a handful of female farriers in Wales and this seems to work to her advantage. She prides herself on never rushing a job. “A farrier has got to be patient with horses because we are doing something totally unnatural to them – it is important to show respect,” she says. “Horses don’t like it when you rush.”

It usually takes Alex around an hour to give a horse a full set of shoes, but that’s not always the case. “Some horses do have issues such as nervousness, but I try to give these all the time they need so that they are able to relax. Customers seem to really appreciate the time spent to keep the horse stress-free.”

Some horses, particularly older animals, react when their legs are lifted, but this is often because they have arthritis. “They are not being naughty – they are just in pain. When this happens, I have been known to shoe with their feet on the floor to try to keep them more comfy,” says Alex.

But even the most patient and calm farrier will fail to overcome the most volatile horses. Alex admits it does help to have a high pain threshold. “Things can happen, even with good horses. I do get kicked a lot, but that’s why I wear chaps and boots with steel toecaps. It’s part of the job, you deal with it.”

During her apprenticeship, she learned the biomechanics and disease issues of a horse from the knee and hock down. There was also the practical experience of working with horses and learning to make the different types of shoe. “We were taught to make traditional shoes as well as the more modern ones. Some owners like the traditional ones more because they encourage the horses to pick their feet up, something often seen with showing Welsh Cobs and Hackneys, but they can be a bit slippery for working on the road,” says Alex.

Although she doesn’t currently have a forge for making her own shoes, she hopes that will happen soon. “I really miss that side of it,” she admits.

She has won three national awards, including becoming the only female farrier ever to receive the Best Forging Skills award, presented by the National Farriers Training Agency. She has also been successful in competitions, winning the Myerscough contest in the shoeing class and placing third in both the therapeutic class at the Three Counties Show and at the Middlewich Competition.

Alex is in no doubt that training as a farrier is the best decision she has ever made. “I think horses are fantastic and how lucky am I to be able to earn a good living from being around them all day. I really look forward to going to work in the mornings.”

On this particular morning, she puts the finishing touches to Aliese’s barefoot trim with a brush of hoof oil and the mare is rewarded for her good behavior with a crunchy carrot. And with that Alex packs away her kit, hops in her van and sets off down the mountain to her next job.

The National Farrier Training Agency can be contacted on 01733 319770 or at fta@farrierytraining.co.uk. Further information can be found on their website.