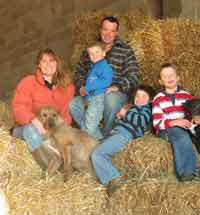 I have always been passionate about livestock shows. I love the bustle and frantic organisation beforehand, the eagerness and anticipation of exhibitors, the tradition of it all, and I love to see the animals themselves.

I have also been involved at all levels – I was show secretary at a show in Warwickshire, and show director at The Royal Bath and West, as well as showing my own sheep. The chance to get involved here has been a long time coming, but this month the biennial sheep show, Tech Ovin, took place and we helped to set up and had a trade stand.

Tech Ovin is France’s national sheep event, which takes place in the local town of Bellac, which is known as the Cité des Agneaux, or the Town of Lambs. It was a technical event, with lots of seminars and forums, yet it also had a range of trade stands, tractors and top-quality pedigree sheep on display.

The show benefited from a lot of government support, judging by the amount of gleaming marquees, big screens and wooden flooring that generously littered the showground – very different from the UK, when often DEFRA could hardly decide whether it was going to attend, let alone if it would pay for its trade stand space.

Tech Ovin asked us to supply traditional, wooden, five-bar gates to go around the main ring and, in return, we were given space to try and sell a few. We have been selling wooden gates, fencing and poultry coops for a couple of years and it is a great sideline, running nicely alongside our farm business.

We were happy to help and took a load of gates the week before the show while, true to form, our trade stand was set up by the light of our headlights on the night before.

In the UK, the night before a show opens is often frantic, with gangs of people running around doing those essential finishing touches. But here, by 6.30pm, when we started setting up the stand, the showground was empty. Only two gendarmes kept us company as we worked and the children raced around in the dark.

For the French, a show such as Tech Ovin is another excuse to meet friends and have an extended lunch, eating grilled lamb chops at long trestle tables in the middle of the ground. Everyone was relaxed and there was little of the traditional pomp and circumstance found on the UK show scene. Rather than a suit and bowler hat, the show president spent most of the show wearing a Led Zeppelin T-shirt and was bareheaded, as he razzed around the stands on a dirt bike.

As to us and how successful we were with selling our gates – I’m not so sure. A well-dressed Parisian, who clearly liked what we had on display, was dismissive about his country cousins. “Why would a French farmer around here buy one of these, when he usually has a pallet lying about?”