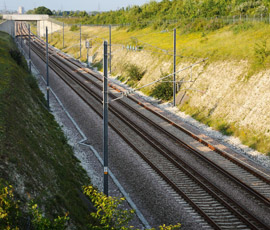 Government plans to build a high-speed rail link from London to Birmingham which would cut through swathes of farmland have been given support from an influential committee of MPs.

Politicians on the Commons Transport Committee said there was a “good case” for the government’s £32bn HS2 scheme to go ahead.

In a report published on Tuesday (8 November) the Committee also said the route must be extended to Leeds and Manchester.

There was no reason for the Scottish government not to begin work on its own high-speed line to eventually connect with England, it added.

But while it supported the introduction of high-speed rail, the committee warned the government it needed to look more closely at the environmental impact of the plans and on its economic viability.

It also needed to have a “serious and factual” debate about the plans and to avoid “disparaging opponents as NIMBYs”.

“Both sides in the debate should show respect for each other and focus on the facts,” the report added.

As many as 250 farmers stand to be affected by the current proposal, with the planned line cutting across farmland in Buckinghamshire, Oxfordshire, Warwickshire and Staffordshire.

Protestors have claimed the rail link threatens to carve up the countryside, destroying rural livelihoods and causing irreversible damage to communities and the environment.

The NFU and the Country Land and Business Association have lobbied for a compensation package to be agreed for farmers affected by the plans.

The Countryside Alliance said it welcomed the Transport Committee’s emphasis on the environmental impact of HS2.

“We hope that this recommendation extinguishes, once and for all, any charges of nimbyism directed at people who wish to see our most-cherished landscape preserved for future generations,” Alice Barnard, CA chief executive, said.

The Campaign to Protect Rural England said the government needed to ensure HS2 was accompanied by wider planning to maximise the long-term benefits for the environment and economy.

Watch our video report on HS2