It doesn’t take a historian with a fancy PhD to guess that only a few copies of that first 22 June 1934 edition of Farmers Weekly still exist. We have just two in the FW office and a couple are safely tucked up in museums. 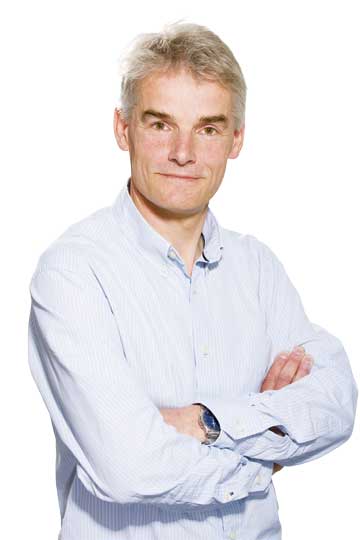 But there must be a few others, too, buried in those heaps of FWs that you find in farmhouse spare rooms, attics, studies and sheds.

I have one in front of me as I write this. It’s looking a little like it was stored in a pen with a goat. The paper has taken on the colour and brittleness of an old and forgotten pancake and bits break off at the slightest touch. You have to handle it very gingerly, like some latter-day Magna Carta.

Curiously, the shade of yellow on the front cover has changed a lot over the decades. It was a Colman’s Mustard browny-yellow in the 1930s, became Lemsip-yellow in the 1970s, and then took on a more eggy hue in the 1990s. The magazine was also slightly bigger than the current version – blame standardisation of modern magazine paper stock for that.

I have to confess here to an ancient link with this first edition of Farmers Weekly. Across the top of the page is a coverline that says Stockbreeding at a Crossroads by SO Ratcliff, the then-NFU president. Stanley Oldfield Ratcliff was my great, great uncle, so I can’t help but feel a tiny tingle of ownership of that first front cover.

Farmers Weekly was, of course, by no means the first farming paper; in fact it was the rude upstart that arrived to challenge the much older British Farmer and Stockbreeder. By 1984, the cuckoo-like FW had kicked the old Stockbreeder out of the nest, even though both magazines were owned by the same publisher.

Turn the pages of that first issue and you get a snapshot of agriculture in the mid-1930s. A lot of it is strangely familiar – concern about poor commodity prices and anger at cheap wheat and beef flooding in from Canada and Argentina, for a start.

But the writers of the time were clearly also excited by new advances in cattle breeding and by the gathering pace of agricultural mechanisation. Tractors were beginning to supplant horses and a few combine harvesters were arriving from the US like spaceships from a distant galaxy.

Some aspects of farming we now take for granted didn’t exist then. You won’t find the word technology anywhere in 1934, or environment, or the public, or supermarket, or habitat.

And clearly, any serious farmer smoked a pipe, since a high proportion of both articles and adverts in FW showed a firm-jawed man with a pipe clamped resolutely in his mouth, his eyes fixed confidently on distant (but rosy) economic horizons.

It didn’t take many years for Farmers Weekly to settle into much the same format that it has now. The current sectionalisation of the magazine, with a news section, a business section and then technical sections covering livestock, arable and machinery had become established by the early 1970s.

Farmlife, meanwhile, provided articles for the rest of the family. It spawned, too, a clutch of cookbooks along the way including The Glut Book, which involved recipes that typically started with the not-very-mouth-watering instruction “Take six rooks, pluck and draw them…”. My mother had a copy, but mercifully there weren’t any spare rooks about

This breadth of coverage no doubt contributed to Farmers Weekly’s success. Those original publishers almost certainly realised at the outset that farming was different from the other great industries of the 20th century: Shipbuilding, mining and engineering.

For a start, farms were usually passed on from generation to generation. Also, they were businesses that the whole family participated in and where the working and living took place on the same spot.

Inevitably, FW has chronicled the highs and the lows of the industry. We charted the good times of farming – the years of decent prices (yes, there were some), the remarkable improvements in grain yields and milk outputs, the decline in back-breaking manual labour and the flowering of new technologies.

But our ability to provide a voice for farmers during the bad times was much more important. When diseases like BSE and foot-and-mouth saw families having to kill their own herds, when governments and quangos rushed in ill-researched and unworkable laws, when retailers would only offer farmers prices below the cost of production, we had the job of publicising the producer’s plight.

The affection that generations of farmers have for Farmers Weekly has always surprised and delighted us. I doubt that The Economist or New Scientist, fine magazines though they are, ever get sent photographs by readers of their two-year-old reading the magazine (sometimes on a potty). Or that they get readers calling to inform them (as one once did to us) that their father had been buried with a pile of Farmers Weeklys under his head to give him something to read in the afterlife.

What of the future? Our website, FWi, adds bright and shiny new electronic channels of communication – like forums, videos and blogs – to the familiar paper product; it also means we deliver you news hourly, rather than weekly. But changes in the way information is delivered are unlikely to stop there.

Maybe one day FW will be beamed direct into our brains with 3D, full-colour scenes unfolding as if we were there. But some things will never change; despite the triumph of science and technology, farming is, and will still largely be, about land and buildings, seed and muck, animals, soil and plants. And despite the predictions by science fiction writers, it’s hard to see us all living off pills made from kelp, jellyfish or microscopic fungi.

And don’t expect those pipes to come roaring back into popularity any time soon, either

10 Things You Might Now Know About FW and FWi

Have you ever been in Farmers Weekly? Tell us about your experience in our forum.