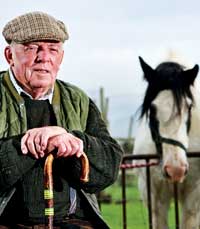 1934 was a vintage year. Mary-Vere Parr tracks down a cross-section of the men and women who were born in the same year as FW

Today, he still drives his Welsh Cob/Shire cross, one of three “ponies” he keeps on his 120-acre farm.

“There are only two places I can tie up my horse in the village and they’re both outside pubs,” Brian laughs. “She’s 33 years old but, like me and the Mrs, I say you live longer if you keep on working.”

Brian met his wife Margaret in 1954 when, hot-foot from

National Service, he came to work on her father’s farm near Nantwich. He stayed 18 months, “just long enough to marry the boss’s daughter,” when the couple paid £6500 for a derelict 52-acre dairy farm with 28 cows. They’ve been at Oakfield’s Farm ever since. A stroke meant Brian moved out of dairy into beef and sheep. One son, Robert, now runs the business while another, Andrew, works as a blacksmith. Daughter Janet has a young family nearby, too.

Margaret and Brian keep busy running a boarding kennels in the converted piggery, gardening and, in Brian’s case, keeping an eye on the auctions at

Beeston. He also writes poetry recalling the glory days of the county’s dairy farms. “How things have changed. But I’m lucky, I’ve enjoyed working, me and the Mrs together. You’ve got to be busy, then life is full.”

From showing her father’s prize bulls as a young girl to doing the milk round as a newly-wed, Maureen Duell has always been at the heart of her family farming business at High Middlefield.

She was just 12 when she joined the Stockton Young Farmers Club. Six weeks after graduating from Wye College with a degree in Horticulture she married John, a local young farmer, returning home to bring up three children and grow stocks for her floristry business.

Although officially now a “senior partner” with daughters Catherine and Sarah farming in Teesside and son John in France, “Mum shows no signs of slowing down,” Sarah says.

“She has a major input in all that happens in our farming business and she even manages to be busy when she visits John in France!”

Although semi-retired, Tony Pither still checks 600 head of cattle each morning on the 1000-acre farm run by his son, Derek.

Rearing beef for Waitrose is a far cry from the start of his career.

“In the 50s, there were four of us on a 200-acre dairy farm,” he recalls. “I remember a dozen people working in a field harvesting sheaves, but now it’s a lonely life.”

Among all this change, Tony is a constant: For the past 20 years he has been chairman of the annual Cheese Rolling festival on Cooper’s Hill, and every week he takes part in weekly bell ringing practice at Witcombe Church where he is church warden.

“The highlight of my life was putting up this grain store and drier 50 years ago,” declares Jeremy Squier, as he waits for his another load of wet hemp from the 2009 harvest and recalls the disastrously rainy one of 1958.

Officially retired, but the only member of the family who can operate said grain store, Jeremy still gets up each morning to make a cup of tea for his two “kid” brothers Dan and Humphrey as they listen to the 06.57 weather forecast and plan the day’s work.

A founder member of FWAG (“everybody is talking wildlife now but in the 1970s ‘birds’ meant women not pheasants”), his ambition remains to sail around the British Isles – but “always next year.”

As a schoolgirl, Julia Hayllor used to get in trouble with her headmistress for bunking off on a Wednesday to go to Guildford market with her uncle, a butcher.

One of just 10 women in her year to study agriculture at Merrist Wood Farm Institute, marriage to a young farmer (they were given a pitchfork guard of honour) led to a small tenancy in Surrey, then a dairy farm in Devon.

Now the family of five girls, three boys, 23 grandchildren and 2 great grandchildren, is spread across two continents with one son farming Riverford Organic Vegetables and rearing beef and chickens in Devon and his two brothers out in Australia.

“I’ve been very lucky,” Julia says. “I found what I wanted early on and I’m very blessed to have this family all around.”

Edward Cotterrell has spent all his life living and farming in the same area of Warwickshire, apart from three years in the RAF in the early 1950s.

Born the third of seven children, he recalls an idyllic childhood “out in the sticks” collecting eggs, feeding calves and milking cows.

Manager of a dairy farm in Berkswell for 30 years, today Edward is usually to be found in the garden or his allotment.

He keeps an eye on the calving in the field over the road from his home, is involved with Young Farmers and a keen showman.

A recent “Best in Show” accolade for one of his Bantams revives memories of winning Supreme Champion at the Moreton-in-Marsh Show in 1976. “You never forget the first win,” he sighs.