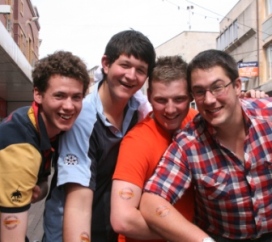 Hundreds of young farmers have been clamouring to get their hands on some exclusive Farmers Weekly tattoos at the National Federations of YFC’s AGM.

Young farmers at the convention, which runs from 6-8 May in Blackpool, have been coming up with some imaginative places to put the temporary tattoos.

Whether they are put on their arms, legs, face – or somewhere more concealed – the tattoos are a mark of quality at this year’s AGM.

The seven-strong team from Farmers Weekly will be handing out tattoos throughout the weekend, so if you are in Blackpool, make sure you go and get yours.

Across the weekend the team will also be posting rolling news, pictures and videos on FWi as well as some top competitions and giveaways:

We want to hear how your weekend goes. What made Blackpool 2011 a trip you’ll never forget? There’ll be a Farmers Weekly AGM t-shirt for the one we like best.

Just go to the Next Generation area of our forums and add your story to the thread called Blackpool 2011 – My Highlight. The closing date is Friday 13 May.

Farmers Weekly will be snapping away with their cameras all weekend – we’ll feature hundreds of you on our website and in the 13 May issue of the magazine.

As well as the kudos of seeing your photo appear, there could be an additional benefit this year, too.

We’ll be circling five lucky members in five photos (two of which will be in the 13 May issue, the other three will appear as part of our web coverage) and if you’re one of them, there’s £50 here with your name on it.

All you have to do is spot yourself, get in touch, prove you’re the person circled and win the prize. Simples.

The fancy-dress theme for Saturday night (7 May) is Song Titles – so we want you to sing for us and you could make it onto one of our videos.

Put your modesty to one side and come and sing as the band you’re dressed as.

The Farmers Weekly crew will be out and about with a Cow-aoke board and we’ll be shooting footage of would-be Lady Gagas or Kings of Leon.

You don’t need to sing the whole song – even if it’s only the chorus or a verse or two, that’s fine – but you might want to get a bit of practise in beforehand.

Whether your song title is a modern smash hit, an old favourite, or maybe just an anthem for your club, take part in our Cow-aoke competition and you could end up a video star.