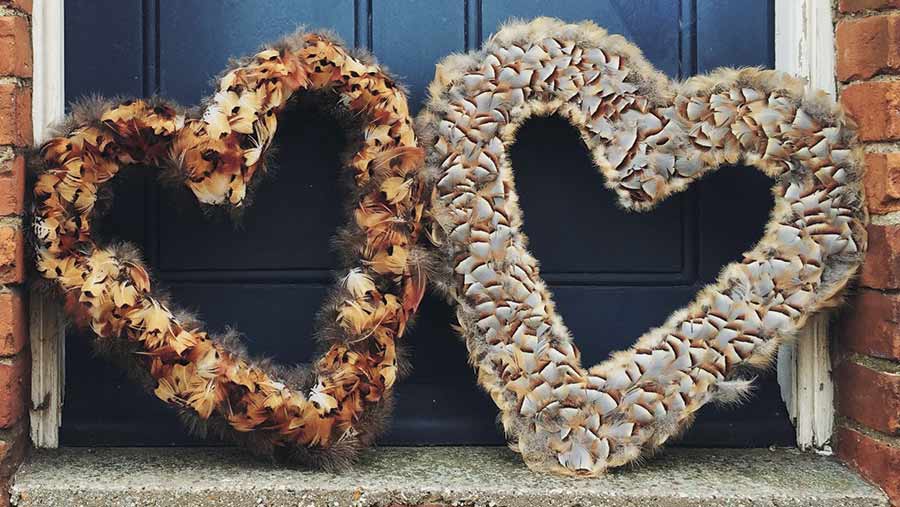 One country woman is giving festive decorations some rural charm this Christmas.

The plumes of game birds including pheasants, French partridge and grouse all feature in the seasonal wreaths painstakingly hand-crafted by Venetia Phipps.

Since launching her business, Plucking Fabulous, just over a year ago, Venetia has seen her wreaths – which last longer than traditional alternatives made of holly, fir or ivy – flying off the shelves.

A keen shot herself, she came up with the idea while shooting on her boyfriend Robert Tubby’s farm in Essex, where she asked what happened to the feathers removed from the shot game.

“I was told they just get burnt,” she recalls. “I asked because they are so beautiful; I thought they would be used for filling pillows and cushions, at the very least. It was sacrilegious and such a waste of such a natural, beautiful product.

“So I said: Right, in that case, can I have them? But the feathers I got back from the game dealer were all torn, stripped and rough, as the machine literally strips them off the birds – I couldn’t do anything with them. So I had a go at plucking a bird myself. Then I had all these beautiful feathers to work with.”

Venetia’s Eureka moment came at a Christmas market in London, where she saw a few feathers placed in a traditional wreath and thought she could make an entire decoration out of those she had collected.

“I’m quite creative,” says Venetia, a corporate lawyer with agricultural firm Hewitsons of Cambridge. “Before I decided to study law, I had a place at Central Saint Martin’s (University of the Arts, London) as I wanted to be a sculptor.

“So I decided to make one of my own and it took about 13 hours. I hung it on the front door and everyone was admiring it, so I started making a few for friends and family. Then I put pictures on social media and lots of people seemed to like them and were asking where I got them from, and could they have one. Initially I made them here and there, but now they’ve taken off.”

The making process was all trial and error in the early days. Venetia initially used glue to hold the feathers in place, but found it too sticky and messy so she buys foam bases and then attaches the feathers direct. She picked up some tips from across the pond, where her family farm in South Carolina and where feather wreaths are particularly popular during the autumn.

“I started using pheasant feathers, primarily because of the nature of Rob’s shoot, although I also use French partridge, duck, and occasionally grouse,” she adds.

“I experimented with the designs and soon picked up on which ones people liked and which ones were the most popular – like the French partridge wreaths, which are very feminine; the birds have the most distinctive, stunning design.

“Even the common pheasant, though, you wouldn’t believe how many different coloured feathers come from one cock bird. You’ve got the green feathers, then the ringneck, coming down the breast there are the blues and blacks underneath, then the fluffy down feathers, the church feathers above the wings, then on the back there are turquoise and burnt orange ones, plus the stunning tail feathers.”

Venetia quickly learnt to sort the different feathers to cut down the time spent searching through her vast collection. Now each wreath takes between two and five hours to complete, depending on its size and the design’s complexity.

As well as being hung in place of a traditional wreath, they can stay up year-round as a piece of artwork, or double as a centrepiece when accompanied by a glass vase and a candle, ideal for a shoot supper.

As well as the round designs – which range from 10in to 20in in diameter, with prices starting from £49.99 – Venetia’s collection also includes heart-shaped pieces, which make great wedding, engagement and Valentine’s gifts.

She also takes bespoke commissions – one measured 1.5m in diameter – and she has several celebrity clients on her order books.

“I sell my pieces in the Cheddar Vine in Saffron Walden and word-of-mouth is great, but around 80% of sales come through social media.My pieces are up in the office, too, and colleagues and clients have bought them.

“Because it’s Christmas, everything has gone bonkers, I’ve been doing a few Christmas gift markets, and I’ll be taking orders for as long as I can make them. I’m also trying to stock up on feathers at this time of the year so I can keep making them into next year too.

“I really enjoy doing it. My next plan is to diversify into brooches using cartridges. I thought that might be a nice idea for drawing pegs and as a keepsake to remember a day’s shooting.”