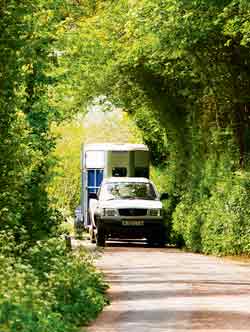 Jokes about women drivers are old and unfair. But handling horseboxes does take some practice, as Sarah Todd reports

Transport was not something that ever used to concern me. There was always a trailer or a little lorry in the stackyard but, like many farmers’ daughters, it didn’t particularly interest me.

Fast-forward 30 years and, as my children have started riding, it was only a matter of time before they wanted to take their pony to shows. An ancient – but, touch wood, sound – trailer was bought on the right side of £500 and my husband waved us off with the parting words: “You know what to do with that pin if you have to reverse?”

Pardon? What pin? The possibility of having to go backwards hadn’t crossed my mind.


We had a bit of a practice, but it was the old story of husbands not making good driving instructors as far as their wives are concerned. The more he explained about “right hand down”, the more the trailer seemed to jack-knife.

There must be an easier way. A temporary solution was setting off an hour before everybody else, so there would be space to do a large swoop – no reversing needed – on the showfield. But this was too exhausting.

We had a lot of success commandeering other people’s husbands and men standing around near gates to “just back her up for me, please”, but then one day a man said no, he wouldn’t help. The redhead in me made me determined never to have to ask anybody again, hence a visit to Mark Stenton, a qualified driving instructor who uses his lifetime’s worth of horsey knowledge to provide courses in trailer towing.

“Like you, they want to be able to take their horse to shows without worrying whether they’ll be able to handle any situation that crops up.”

And what about the male of the species? “While it’s all too easy to generalise, the 10% that are men tend to find it harder. They don’t listen as well and find it more difficult to admit they need help.”

Other customers are those who got their car driving licence after 1997 and who are now required – depending on the weight of the trailer they are towing – to take an additional test.

Before we get behind the wheel, Mark runs through the basics of hitching a trailer up, handing me a useful booklet with more detailed information on topics such as the law and insurance, and other handy hints.


Having lowered the steering wheel and pumped up the seat of his Range Rover, we are ready to go. After a lap or two of the paddock, we get down to some reversing.

“The key to reversing is to do everything very slowly and gently,” says Mark. “Try to avoid over-steering – make any adjustments small. Also remember to clean and adjust your mirrors, so you can see down both sides of the trailer.”

Mark explains the importance of keeping equal amounts of trailer visible in each mirror, gently steering towards any side that has more trailer, to correct it.

Incidentally, the lesson takes place in an automatic. “I do offer a manual vehicle, but the automatic leaves the driver free to concentrate, without worrying about changing gears or stalling,” says Mark.

Time to tackle going backwards round a corner, so some showjumping poles are mocked up to mimic a road junction or parking bay. This is the point to forget everything anybody has told you – all those confusing old stories about steering in the opposite direction to the one you want to go in – and just make your mind go blank.

Mark is an advocate of the “Australian method”, which involves setting off with both hands at the bottom of the wheel in the 6 o’clock position. Then simply move the wheel about half a turn in the direction you want to go, setting the car at the right angle to the trailer for the turn. Once the trailer has come across your mirror, it’s time to turn the steering wheel – hands back to normal position – in the direction of the mirror that’s filled.

With bits and bobs to sort out, such as remembering to allow for kerbs, I come away with some much-needed confidence.

“That lack of confidence is the most common problem people have,” says Mark, who combines teaching people to drive with helping out at the family’s riding stables. “That, coupled with going too fast and oversteering.

“People also forget, sat in their comfy vehicles, that the suspension in a horse trailer is really basic. They might not feel the potholes in the road, but any horse in the trailer will. This makes planning ahead, such as allowing plenty of time for a journey, vital. I’ve lost count of the number of times riders have complained about their horse not wanting to go in the trailer – there really is no wonder, the speed some people drive at.”

A two-hour introductory course with Mark costs about £60, with rates negotiable for group bookings, such as riding clubs. Everything is very well set up at the riding school, but he will travel out to your own venue.

Back home, and another show schedule drops through the letterbox. This will be the first one we’ve been to without an advance call to the secretary to ask what the parking will be like. Maybe now that there’s not such a worry about bashing against a gate post, it’s time to think about a newer trailer 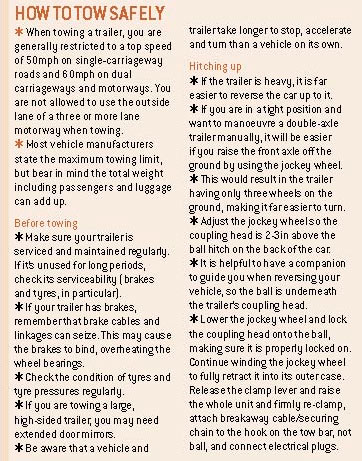