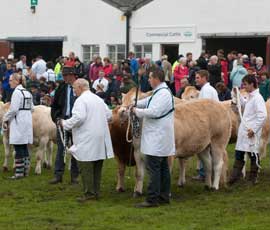 Great Yorkshire Show organisers are hoping for the best year yet, with visitor numbers expected to reach at least 130,000.

The show, which is sometimes described as the biggest in England, attracts visitors from all over the UK, and even further afield.

“We are hoping for the best attendance ever,” said Nigel Pulling, chief executive of the Yorkshire Agricultural Society.

The show lost £2m in 2012 after poor weather forced the organisers to cancel mid-way through. However, the society has spent £150,000 on drainage and introduced other measures to stop the same thing happening again.

“It’s not just the financial importance – it’s an emotional thing too. It was important for us to be prepared this year but we’ve also been blessed with good weather,” said Mr Pulling.

“This shows how much faith people have in the show,” Mr Pulling said.

The weather should have a big impact on visitor numbers, he said, and over three days the mercury could top 32C.