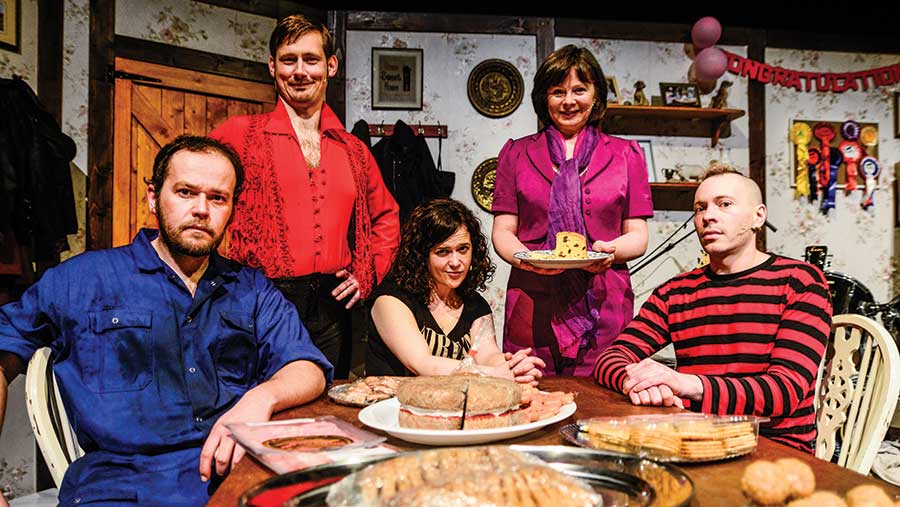 Many farming sons and daughters can recall the mortification they felt when someone they knew rocked up on the farmyard to be greeted by a scruffy parent plastered in mud, grease or cow slurry.

Llinos Mai, an actor and writer who grew up on a dairy farm in Pembrokeshire, confesses to initially concealing her upbringing from her theatrical friends for fear of being seen as a hillbilly. But she turned it into a positive when she saw the advantage in incorporating tales from her childhood into her scripts.

“The theatre world can be quite middle class, so I didn’t want people to know that I grew up on a farm. The irony is that as soon as I started to shout about it and celebrate it, it totally changed my career. I’m now hugely proud to have been a farmer’s daughter from west Wales.”

With some modifications and name changes, Llinos revives comedic situations from her childhood in the humorous radio play she wrote and performed in, The Harri-Parris. It has now developed it into a stage show, The Harri-Parris: The Big Day, which has been performed to great acclaim across Wales and is about to start another run before heading to the Edinburgh Festival this summer.

The show focuses on what happens when the daughter in the family brings her fiancé home to meet the family (food and animals are other dominant themes in the storyline).

“On a farm, you are dealing with the wild world of nature, mud and animals, life and death, and things that can be completely out of your control. You can’t have any airs and graces,” Llinos admits.

“I remember feeling really embarrassed when my headteacher from primary school came to the farm to drop something off and my father emerged from the milking parlour with cow poo dripping off his shoulder because that is what happens in the parlour when you are dealing with big, messy animals.”

Feathering day also features. “I hated the geese because they used to chase me around the fields; I was the right height for them to bully. I was more than happy to see them come to the end of their days in December.”

Llinos – whose family name is Harries, and Mai is the middle name she adopted as her stage name – admits she didn’t immerse herself in the farm when she was growing up, preferring to direct her energy and time into amateur dramatics and writing.

“The farming community is very close knit, and I couldn’t do anything in our community without it getting back to my family. It was one of the reasons I didn’t join YFC. Too many of my family were involved so I thought it would stop me from having fun,” she recalls.

She studied music and drama at university and settled in Cardiff, where she was working as an actor but was struggling to get enough work to earn a decent living.

“I had been holding back from writing because I thought I didn’t have anything to say that would entertain people. It was a real lightbulb moment when I woke up to the fact that I had endless amounts of material gifted to me from my childhood.”

Because it features so many incidents and characters from her own life, Llinos forbade her family from coming to see the first run of the show. But they are now regulars in the audience and even refer to funny incidents they experience as “Harri-Parri” moments.

“It has become a bit of a competition among my family to suggest ideas for new material,” says Llinos.

The matriarch – Glenda Harri-Parri – loves nothing more than pouring over the detail of the latest deaths in the community. “On my return visits, I would ask if there was any news and would often be told about the latest death in the area – whether I knew the deceased, went to school with the deceased’s relative or just knew someone who vaguely knew the deceased. When I used that in the show, my mother was genuinely surprised about where I had got that idea from.”

Family mealtimes are another conduit for humour. “My family loved cake and generally feeding you up, just in case you hadn’t had your fill at the last house you visited. The Harri-Parris do this, too. A ‘no’ to cake could be a fatal move in their household,” says Llinos.

The farm is no longer in the family and Llinos is nostalgic for that way of life. “The irony is that although I saw farming was hard work and a financial struggle when I was growing up, I would love a smallholding now if I could afford it.”

Llinos has great ambitions for the Harri-Parri format. “It would make a fantastic TV sitcom. If I could get rural west Wales on to network TV, then I would feel my job was done.”