Lambing and calving are busy times for farmers, with sleep often in short supply and not enough hours in the day to ensure you take care of yourself.

But planning in the run-up to these events can help to ensure your body is geared to deal with the extra demand.

Here are some wellness tips from former farmer and personal fitness and nutrition expert Emma Grunnill from Grunnill Fitness, performance nutritionist Paul Johnson, and some FW readers online, on how to improve mental and physical resilience.

Water to humans is like fuel to a car. It is hugely underestimated, but can massively help with energy levels, focus and cognitive ability.

Ideally, farmers should be drinking at least two to three litres of pure water a day. Cups of coffee and tea don’t count as they are caffeinated and act as a diuretic, stimulating urination and potentially leading to dehydration.

Although there’s nothing wrong with having a cuppa, drinking water is better for boosting energy levels.

In the run-up to busy periods such as lambing, calving and silaging, where routines are often out of sync and sleep is in short supply, batch cooking meals and freezing them will help ensure a hearty meal is available when it is needed.

3. Stock up on adequate snacks

Brew time wouldn’t be complete without a biscuit or some cake.

However, consuming too much sugar can cause energy levels to dip. It is important to try to get a balance between sweet snacks and non-sugar/lower sugar snacks such as nuts and granola bars.

A hot and sustaining breakfast will help set you up for the day ahead; maintaining energy levels and reducing the need to snack.

Porridge topped with banana will slowly release its energy, as well as providing an instant sugar hit that some may require.

5. Try to establish a sleep routine

No matter what time of day you finally get to bed, establishing a sleep routine can help ensure a more restful sleep. For example, a hot shower, or changing into clean clothes can help signal to the body it is time to rest.

Green tea can encourage restful sleep. Although it is a natural source of caffeine, it also contains a substance called L-Theanine, which has a calming effect on the body and encourages relaxation while also cancelling out the stimulating effects of caffeine.

So a cup of green tea before bedtime has the potential to improve sleep. Avoid caffeine or other stimulants late in the day as that can disturb sleep, causing a “fight or flight” response and making us more alert.

Many people make mental lists of things to do, but this sort of brain stimulation can disrupt sleep patterns.

Physically writing things down before going to bed can help clear the head and ensure a more restful sleep.

Be organised and have a rota so everyone knows who is doing what. Maintaining good communication through the use of apps such as Whatsapp or old-school handover notes will help ensure sleep is undisturbed and things are not missed.

Breeding from animals that are known to calve or lamb easily can help remove some pressure. In addition, feeding adequate nutrition in the run-up to calving and lambing and during the breeding period will help reduce birthing problems, making the whole process easier for all.

10. Make use of technology

The advent of calving/lambing cameras has minimised the need to physically check animals as often, allowing farmers to attend births only when necessary. They also mean fewer disturbances for stock at a stressful time. However, it’s important to regularly check cameras are working.

Being prepared and making sure you have all the tools you need for the job will make life easier. Also make sure the shed is set up well to ease handling and stockman duties. 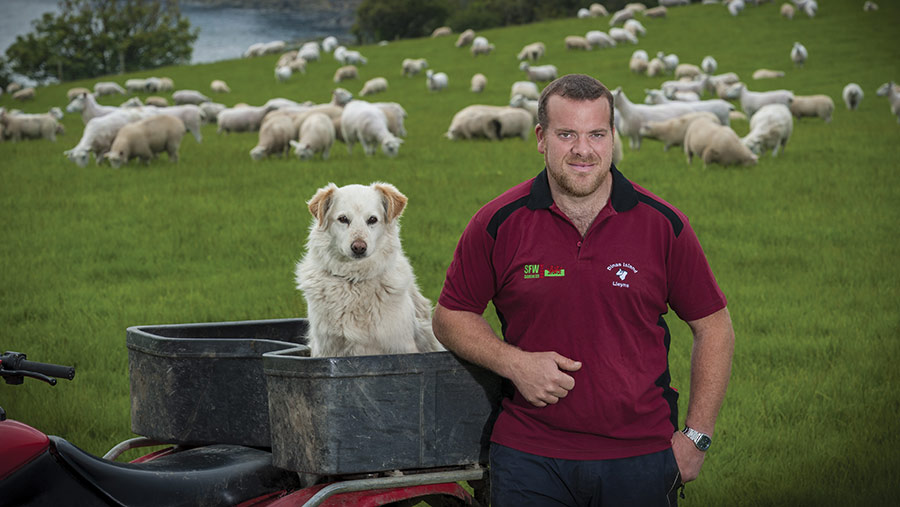 Sheep farmer Neil Perkins will be lambing 800 Lleyns and 600 Abermax ewes this March over 35 days, along with his wife, Lynda, father, Roger, and three lambing assistants.

During lambing Mr Perkins moves into the farm office, which is attached to the sheep shed, so he can be on hand 24 hours a day.

The lambing assistants work in two shifts with two on during the day and one at night. “Whoever helps us during lambing just becomes part of our family,” Mr Perkins says.

He says he doesn’t dread lambing time because it is the time of the year when the family reap the fruits of their labour.

The flock is performance recorded, with Lynda in charge of data recording. The farm sells about 500 performance-recorded ewes and rams a year in partnership with Innovis, making it the main focus for the business.

“We record everything as we want to breed the best. We aim to produce stock that people can buy and use with the confidence they are going to perform,” he says.

Mr Perkins overseas lambing but says there is a strict farm ethos that “no one is better than anyone else”.

“We don’t have a hierarchy, so this means we all muck in and help out. Our ethos is ‘one in and all in’, which is good for team morale,” he adds.

He says the big driver for him is knowing that lambing marks the end of winter. “I know that after 35 days of lambing, winter is over and we can look forward to some time off and going out in the kayaks. This gives me a real boost,” he says.

Having the office on the side of the shed aids communication, as it becomes the hub where staff congregate during lambing.

Music is important to getting through the day, and whoever is working can play their music of choice in the lambing shed. “It helps create a good atmosphere with people singing along,” he says.

Mr Perkins has three children, aged 18, 16, and 13. He says it has always been a focus that the children should not suffer because of the farm. “We always work around the kids and their needs at lambing,” he says.