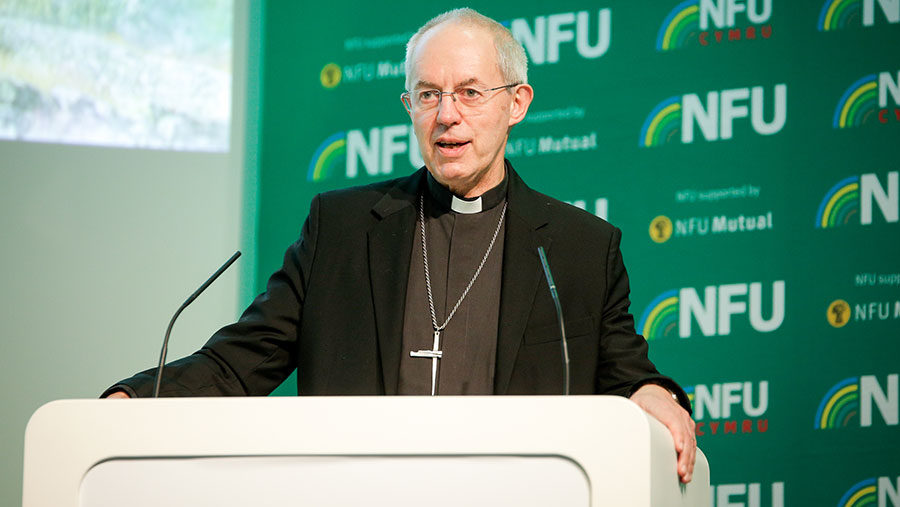 Farmers and those living in rural areas have been urged to seek help and open up if they are suffering feelings of isolation, emptiness or despair, accepting that mental illness is nothing to be ashamed of and is highly treatable.

Answering questions at the NFU’s annual Henry Plumb Lecture, the Archbishop of Canterbury, Justin Welby, spoke candidly about his own experience of depression.

“I take anti-depressants. I see someone quite regularly,” he said. “For quite a long time my behaviour became so complicated that even my colleagues noticed it as being unusual.

“I made a joke of it, but depression is not a joke and is the most frequent form of mental illness, and is treatable for most people most of the time.”

During his lecture, the archbishop highlighted the pressures that many farmers are under, talking about how “hard, extraordinarily stressful and deeply complicated agriculture is”.

The farming community had faced many challenges in recent times, including the impact of Covid-19, which had pushed many urban people into rural areas, and denied farmers the opportunity to meet socially, be it at village shows or markets.

Perhaps more alarming was the uncertainty the industry was facing during a time of political, climate and scientific change.

“Neuroscientists say that the chemistry of the brain is most adversely affected by uncertainty, by sustained adversity and by the inability to control events. Does that not sum up farming?” he suggested.

A survey by the Farm Safety Foundation found that 88% of farmers thought poor mental health was the biggest hidden problem facing the industry, said the Archbishop.

And the Office of National Statistics had reported that 133 people working in farming and the agricultural trades took their own lives in 2019-20.

When it came to poor mental health, the archbishop stressed the importance of openness.

“Whatever you do, don’t keep it a secret,” he said. “I was really embarrassed when I went to see someone about it for the first time. But mental illness is just illness. We need to kill the shame.”

There were plenty of advice networks farmers could access – “a lot of them linked to the church” – which could be approached anonymously if necessary.

And sufferers should not underestimate the value of community, such as young farmers’ clubs, churches, and local social groups.

“There really are no shortcuts or silver bullets,” said the archbishop. “It does come down to friends, family, reaching out for help, not trying to be brave about it, and killing the shame factor.”

Where to go for support