An award-winning young farmer has been inundated with messages of support after speaking out about his battle with depression.

Dan Goodwin, 21, was named Suffolk Agricultural Apprentice of the Year in 2018. Judges described him as focused, determined and passionate about his farming career – and an excellent example of the kind of new blood needed by the industry. 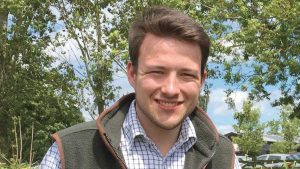 Mr Goodwin, from Bury St Edmunds, has now revealed he has suffered from depression and suicidal thoughts for the past four years. This week he told Farmers Weekly he had now decided to leave agriculture for the sake of his health.

“It started around four years ago when I had to step up my role on the farm I was working on,” he said. “I became very ill due to the stress and the amount of pressure I felt under. Unfortunately, being on my own all the time I was unable to talk to anyone.”

Mr Goodwin said he had thought about taking his own life a number of times – but the thought of his girlfriend stopped him going through with it. He said: “I had a picture with me and I just couldn’t do it and leave her to deal with the loss of me.”

Having since sought medical help, Mr Goodwin added: “It has been a hard four years dealing with it all and now I’m slowly on the road to recovery. But unfortunately, I’ve taken the decision to come out of farming completely now due to my illness.”

Urging other people in farming to talk more openly about their mental-health challenges, Mr Goodwin shared his story on social media. The many messages of support and good wishes he received in response made things so much better, he added.

“Some people might think ‘why put it out on social media?’ but I think it’s best to. You never know who else could be going though the same as me – and they need to see and know that you should never keep it hidden away.”

A New Zealand farmer who battled an eight-year drought and mental-health issues to become a top beef and sheep producer is to share his story on a UK tour.

After years of spiralling debts and depression, Doug Avery turned his family-run farm into one of New Zealand’s most successful agricultural enterprises. He is sharing his story with UK farmers this autumn on a tour called Shift happens! An audience with the resilient farmer.

Mr Avery is speaking at 12 locations across England, Wales and Northern Ireland from 30 September to 18 October. He plans to inspire UK farmers who are looking or needing to change their approach to their farming business or personal life.