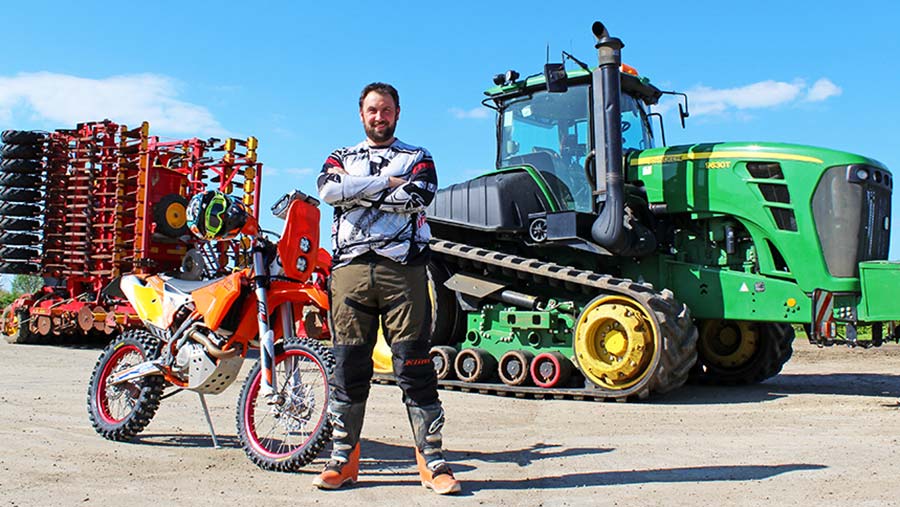 Farming can sometimes be the one thing which dominates everything, brewing feelings of stress, loneliness, depression and even boredom.

Putting time aside to step away from the work treadmill that farmers can find themselves on and engaging in a hobby outside of the agriculture bubble will bring huge benefits when it comes to your work ethic, productivity and overall state of mind.

Some might scoff at the thought of taking hours, days or even weeks away from the farm to pursue other interests, but these petrol-head farmers have found motorsport to be a great way of relieving stress, making new friends and living childhood dreams.

The point is, whatever piques your interest, making time to do something other than working can make a real difference to your quality of life.

From Hertfordshire to Hellas 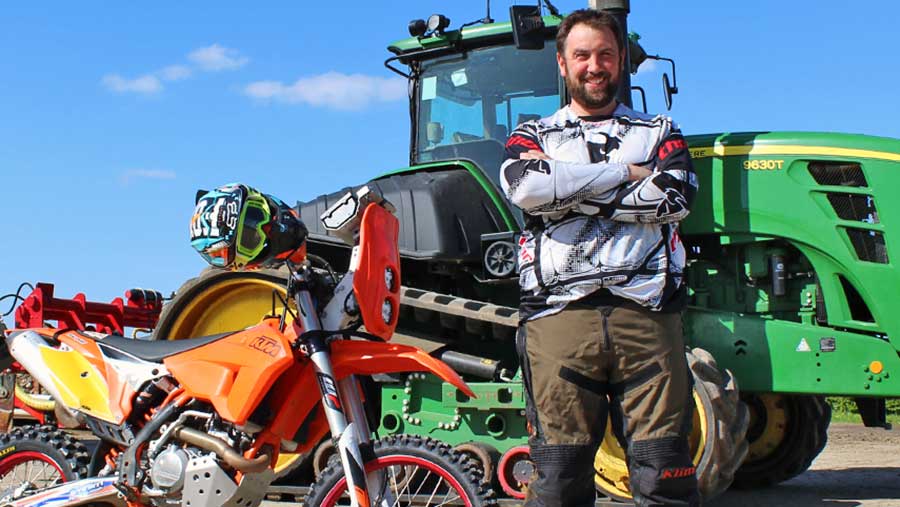 Dusty, bumpy thrills on two-wheels is Hertfordshire farm manager John Haynes’ off-farm hobby, getting the bug as a quad-bike-blasting youngster before switching to motorbikes in regional off-road track endurance races about 10 years ago.

He has recently returned from his second off-road adventure in Greece, competing in the Hellas Rally.

Hurtling along a mixture of lumpy mountain tracks and smooth main roads, the seven-day endurance race sees about 150 riders hustle their machines as fast as possible while navigating themselves to the next checkpoint.

Typically, John was on his 450cc KTM EXC motorbike for six or seven hours each day and covered almost 1,400 miles in total.

“It gives me a real buzz, an adrenaline rush and it’s great fun,” he says. “It’s all about endurance, so you’re having to navigate your way while racing your bike as hard as you can but making sure you don’t fall off, break something or incur a time penalty by speeding through a town, for example.”

To make his agile 50hp bike rally-ready, John bolted on an extra-large fuel tank for improved range, navigation equipment and stronger wheels to soak up heavy punishment from the rugged Greek terrain.

The bike cost him £8,000 and he spent about £2,000 on parts. He installed most of them himself not only to save some cash, but also to learn more about the mechanics of his machine – knowledge that would stand him in good stead should he suffer a breakdown on a lonely mountain pass. 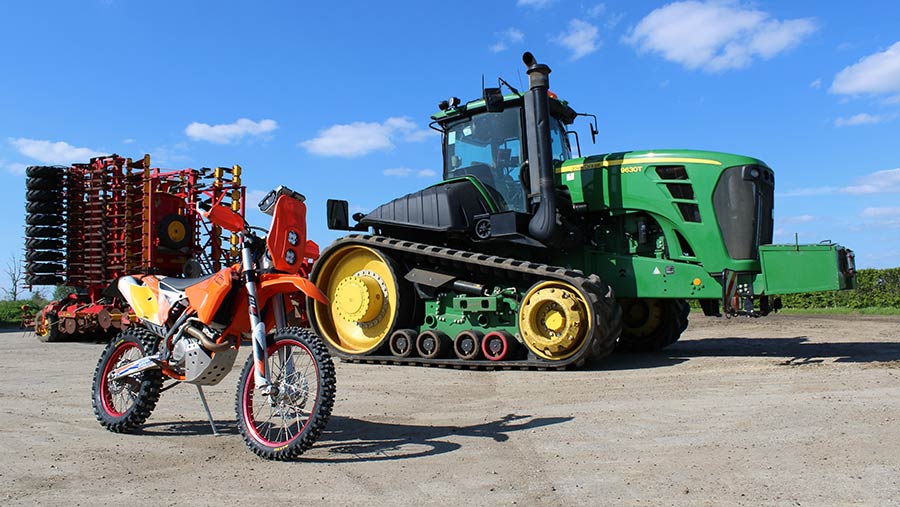 Entering the rally cost just over £1,000, including shipping his bike and equipment to Greece, and he burned through £20-£30 worth of fuel each day.

Managing of 1,200ha split over three farms, John says getting time off can be tricky but he is determined to devote some time to his hobby.

“You have to book a rally and the time off months in advance, so you know you’re going and you’ve got a date to work to. It’s booked in and you’re doing it,” he says.

“You can get consumed by the farming and it can get you down. I come back refreshed and my work rate picks up, having switched off for a bit.”

The Hellas Rally was a case of perfect timing for John, taking place in the lull between crop fungicide spray timings. He encourages other farmers to get a hobby to help them realise that there can be more to life than the farm work.

“I lost my dad six years ago, and it made me think that I could’ve gone to see him more often. Instead all I did was work myself into the ground in order to get a bit more spraying done. You’ve got to live and money isn’t everything.” 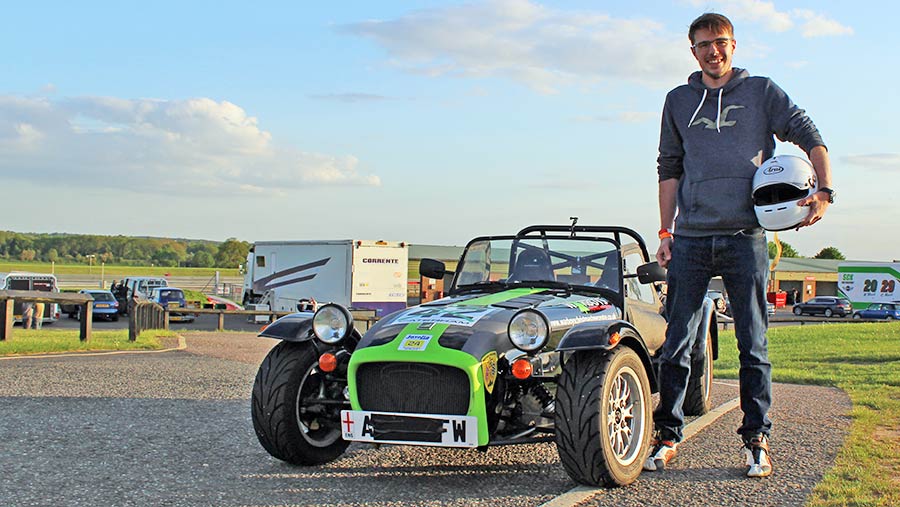 Living the boyhood dream of being a racing driver is what it’s all about for Jamie Stokes.

Four years ago, he took a leap into the world of motorsport, signing up for the Caterham Academy series ­– a package for would-be racers who have no racing experience.

For about £25,000 he gained his racing driver licence and was entered into six races at some of the UK’s top tracks, including the illustrious Silverstone ­– home of the British Formula 1 Grand Prix. But before all of that, he need to build his feather-weight Caterham Seven track car.

“It was all part of the fun – I put the car together over about three weeks of evenings and weekends at home,” says the former Farmers Weekly Awards Young Farmer of the Year finalist.

“It was billed as ‘do a racing season for £25,000’ but in reality the cost was more than that once you add on the cost of travelling to the different tracks and so on.”

After the paid-for season was finished Jamie decided the costs we a little too steep and the summer timetable of races wasn’t ideal for an arable farmer.

What it did leave him with though was a track-spec car and enough racing experience to confidently thrash his black and green stripped-out racer around any circuit.

He’s since driven his 125hp British pocket rocket almost 500 miles from the farm near Warboys to Germany’s Nürburgring – a 13-mile track that is the mecca for speed-junkies worldwide.

“Racing gives me the biggest adrenaline rush that I’ve ever experienced and it’s addictive.” 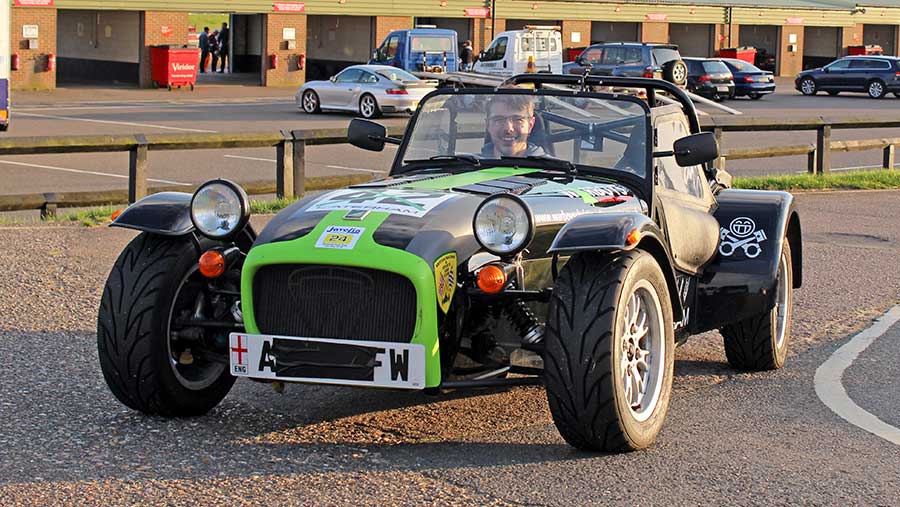 Jamie admits that the setup he has is more towards the high end in terms of what is required to take part in track days, and stresses that they can be done for a relatively small amount of money.

It’s not uncommon to see standard road cars being hammered around a track. A racing licence and insurance for track use aren’t required.

All liability is waived, so even if you do crash your £1,000 Renault Clio into a £100,000 Lamborghini all you need to worry about is the immediate outrage of the supercar driver and then repairing or writing off your own vehicle, Jamie explains.

It has been a high-pressure season for Jamie, who farms 900ha of arable land with his dad and uncle.

Frustrations have been running high as bad weather this spring meant the windows for oilseed rape fertiliser application and spraying wheat were missed.

“Farming can be really tough at times because things can get on top of you. It’s very important to have any sort of hobby.

“For me, when I’m in the car, I’m not thinking about farming and that’s partly because motorsport has its own stressful moments when you might spin or go off into the gravel and break something,” he laughs.

“There’s always work to do on the farm but because we’re arable we know when the big jobs need doing.”

Booking a track day well in advance can act as a deadline for getting important work done, but Jamie says he often registers a week before hand when he is more certain that he can take the day off.

We all know farming throws up the toughest of challenges, which is why everyone needs some support and advice from time to time.

Visit the page of our website dedicated to all things related to keeping farmers mentally and physically fit to farm.

This health and wellbeing hub has a shed-load of advice and tips and case studies, from simple exercises to help keep ailments at bay, to places you can turn to when times are hard.