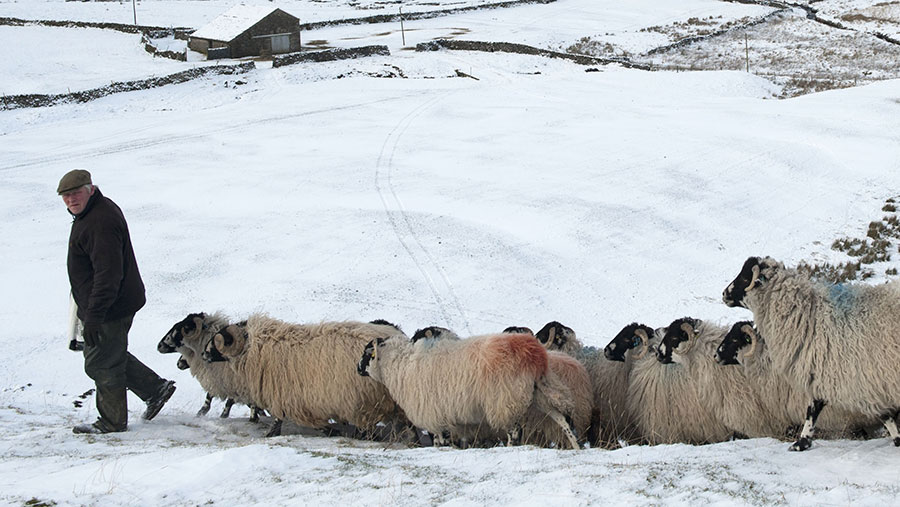 Loneliness can affect people of all ages, anywhere at any time. Christmas, however, can be a season when some, such as elderly people living on their own in rural areas, can feel it most acutely.

According to the Farming Community Network’s regional director Glyn Evans, living in the countryside brings its own risks in this respect.

“There’s sometimes a perception that all rural communities are close-knit and protect people against loneliness, but that isn’t always the case,” he says.

Part of the problem stems from changes in the age profile of villages, he says. Many young people have moved away, while increased numbers of retired people settle there. This can result in “fractured” families, with older people less able to see their children and grandchildren.

Loneliness can also be amplified by the lack of services. Whether it’s poor public transport, the disappearance of pubs, shops and doctors’ surgeries, or poor phone or broadband connections, when people face practical problems and feel less connected, they are more likely to feel lonely.

“There are many ways people choose to disguise loneliness, so it can often be hidden and unacknowledged,” explains Glyn.

“Christmas can be a tough time and farming families generally come together brilliantly, but it’s important to consider relatives, friends and neighbours. As well as company, small practical help can go a long way – checking people are warm enough, offering to grit paths or delivering shopping.”

Helping others can also be hugely rewarding and help assuage an individual’s own sense of isolation and improve their mental health, he says. “Sometimes, those practical acts of support develop into friendships and social relationships.

“For a lot of people, loneliness is a constant, not just an emotion they experience at Christmas, but if you know someone who is going to be on their own during the festive season, could you invite them to share Christmas Day or Boxing Day lunch with you?”

The Farming Community Network runs a confidential helpline, open every day of the year from 7am-11pm, with its volunteers providing free, confidential, pastoral and practical support. Call 03000 111 999.

The charity Age UK says most people will feel lonely at some point in their lives, but for a growing number, particularly those in later life, it can define them.

In fact, they estimate the effect of loneliness and isolation can be as harmful to health as smoking 15 cigarettes a day and is more damaging than obesity.

If you suspect someone you know may be lonely, one of the most effective ways to help is simply by “being there”, the charity adds.

Doing this can let them know that someone cares. Age UK’s advice is to not be afraid to ask a lonely person how they are feeling or if there’s anything you can do to help. Having someone who is willing to listen could be a great comfort.

How to spot loneliness

It’s not always easy to identify signs that a person is lonely, but clues could include:

You should also consider if a person has had a change in their circumstances, such as:

Case study: ‘Now I feel as though all I do is waste time’

“I was one of five children and grew up on a farm. My husband and I had three sons and led a very active life.

“Almost 35 years ago, we moved to our village. We chose to live in a house on the main street, near to the pubs, post office and village shops, so we would always have friends nearby.

“But now I’m 85 years old and people rarely call. My husband died six years ago. I’ve never lived on my own before and I find it very, very peculiar. I want somebody to talk to about the news or about a book.

“I enjoy debating, getting different opinions and trying to work things out – but it doesn’t happen. The only people I see each week are the people I pay to take care of me. My sons are very caring and come when they can, but they don’t live nearby.

“We used to have a lot of friends, but I’ve lost almost all of them through death or dementia. I can’t get out to meet people because I have mobility problems and my sight is unreliable, so I’m reluctant to use the car.

“I have one friend that I email, and I email my sons, but nobody else I know uses the internet. And the signal is poor where I live. I have always been busy and useful. I wasn’t somebody who wasted time.

“Now I feel as though all I do is waste time. What I’d like is friendships and company.”

Source: Loneliness – Accident or Injustice, by the Diocese of Oxford

Farming charity Rabi will give out more than 700 festive hampers across England and Wales this Christmas, lifting the spirits of those enduring hardship.

They will go to those in receipt of long-term financial support from the charity, mostly the elderly, sick and disabled.

“Christmas can be a lonely time for many people, including those who are widowed or live miles away from family and friends,” says Rabi chief executive Alicia Chivers. “For some, the hamper we deliver is the only gift they’ll get.

“This campaign is perfect for meeting a basic need, whilst also bringing a bit of simple happiness to people whose lives are difficult. It’s a joy to see someone delving into a box of goodies with childlike delight.”

Some of the hampers are delivered personally by charity volunteers, with Leeds-based Festival Foods producing the hampers and also distributing them widely.

They contain store cupboard essentials, as well as a few treats such as mince pies and chocolates. The cost of a hamper to the charity is £50 for a single person or £85 for a couple.

Devon farmer John Smith, who helps co-ordinate deliveries in his county, says: “There are many people out there in need of help – the countryside can be a very lonely place.”

To donate, go to the Christmas hamper campaign website.

Loneliness-busting ideas from the farming community

Pop in on elderly neighbours with a small gift / some mince pies, or even invite them for lunch if you have room

Using a local pub or community hall to bring people together for lunch. Produce from local farms to help.

Maybe all meet up at someone's house and have a Xmas dinner?

On Facebook, Charles Lamb said: “Get them over to yours for a meal and company! Used to get a neighbour over here, he loved it!”