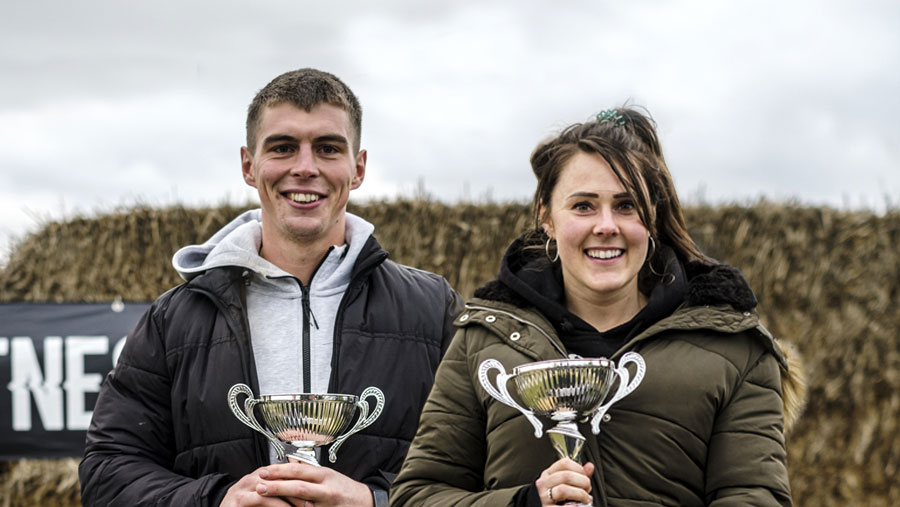 A Somerset young farmer and a farmer’s daughter and game-shoot manager from Hertfordshire have been named Britain’s Fittest Farmers 2020.

Cattle farmer James Arney from near Frome and Emma Ashley from a mixed farm near Hertford took the trophies at the grand final of Farmers Weekly‘s hit competition, which seeks to promote a healthy lifestyle and get agricultural people talking about mental health.

Our victors were crowned as male and female champions at the end of a demanding series of challenges designed to test their physical fitness and mental health awareness.

From hundreds of applications, 80 competed at the qualifier event in September, with 10 men and 10 women chosen to progress to the competition’s final stages.

Each of the finalists took part in an interview with Jude McCann, chief executive of the Farming Community Network (FCN) and Farmers Weekly‘s community editor Oli Hill.

This interview round focused on the finalists’ awareness of mental health issues and their ideas on how to address the problems faced by those working in the agriculture industry, including breaking down the stigma and supporting farmers to talk more openly about their struggles.

The final was held at an event co-hosted by Farm Fitness, an extreme farming-inspired outdoor gym run by farmer’s son Tom Kemp at his family farm in Essex on 17 October.

With four gruelling physical tests of speed, strength and stamina laid down before them, James and Emma sprinted, jumped, lifted and climbed their way to the top step of the podium.

They each take home a Britain’s Fittest Farmer 2020 trophy and a £1,000 cash prize. Watch the video of the final below.

James’ family farm, in Rode, near Frome, contract-rears about 350 heifers after its dairy herd was sold a few years ago.

This was a tough decision for James and his family to make, but he says it was the right choice not just from a business standpoint, but a mental wellbeing one.

“We sold our dairy animals about three years ago – it just wasn’t working financially. I didn’t want to milk cows, and we made a decision between Dad and I that if we were to milk cows then he was on his own and I was doing something else,” he says. 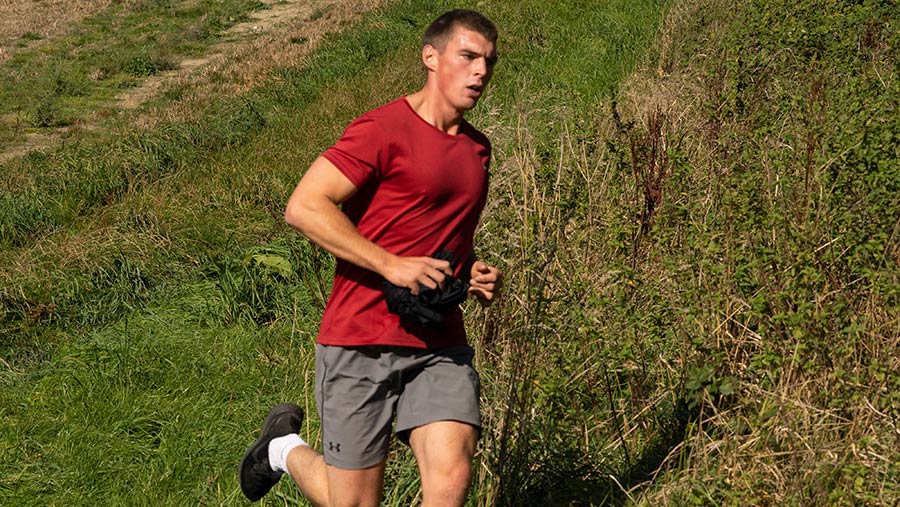 When an opportunity to rear heifers from two to 23 months for a neighbouring dairy farm that milks 800 cows came up, James says it was right for the whole family to take it.

“As hard as getting rid of the cows was, it was a wise decision both physically and mentally for our family and for the future of the business.

“It gives us a chance to diversify and allows us to have a bit more free time instead of milking cows for six hours a day.”

He trains five or six times a week, focusing on functional fitness, weight and endurance training, including running and cycling. During the coronavirus lockdown, he set up a gym on the farm using tyres and heavy objects that were lying around.

In the summer months, he enjoys to playing for a local cricket team and switches to playing in a five-a-side football team in winter.

“Exercise is a great way to get off the farm, certainly during lockdown. I would go for a run for half an hour and forget about everything, and then I could come back and do some more work.

“It gives me a goal to keep improving. I’m quite a worrier and I know that if stuff on the farm isn’t going well, I can go to the gym, I’ll think about things and refocus. Problems don’t seem so bad if you take a step back.”

James wasn’t going to enter the competition until his family spurred him on after seeing it advertised.

The third-generation farmer says he’s glad he applied as it gave him something to look forward to in a year that as been difficult for many because of the pandemic. 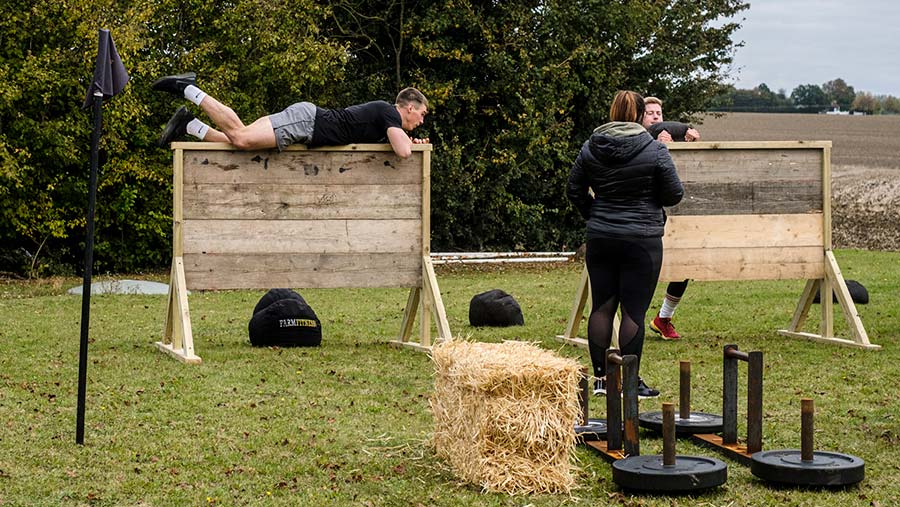 Managing time off the farm is crucial and this is something he pushes for as the youngest partner in the family business – not only for himself, but for his dad, who works tirelessly.

He actively encourages his dad to get off the farm to indulge in his fishing hobby.

“Growing up, Dad was always working stupid hours, so from a young age I saw how tough it was for him and we would never have a family holiday. Now, it is a lot easier, as one of us can do everything on our own.

“Quite often farmers spend too much time getting stressed out and overworking and then they get run down and that’s when things get tough.”

It’s important to ask for help, he says, recognising that this isn’t something that farmers are always good at.

“They’re renowned for working hard because farming is 24/7 and it is difficult to stop working when you’ve got 100 other things you need to get done.

“It can control your life, so having time away to refresh is very important for everyone.”

Britain’s Fittest Farmer was launched in 2019 by Farmers Weekly as a fun way of sparking a vital discussion about the physical and mental health of the nation’s farmers.

The initiative is now in its second year, and it’s more important than ever to make sure Britain’s farmers are getting the exercise they need to stay fit and healthy.

Farming can also be a challenging and isolated job, which is why it is crucial for farmers to focus on their own mental health and wellbeing so that they can keep their business in tip-top condition, too.

Emma Ashley: “Farming can be a lonely experience if you allow it to be”

“Fitness has gone from childhood fun to a way to focus my mind,” says Emma, who works on her family’s 100ha farm just south of Hertford.

The 31-year-old works alongside her dad on her family’s Monks Green Farm, which runs a flock of 250 sheep and produces hay.

“From an early age I used to get up at the crack of dawn, jump on my bike and follow my dad on his early-morning runs. It wasn’t long before I put the bike to one side and matched his pace on foot.” 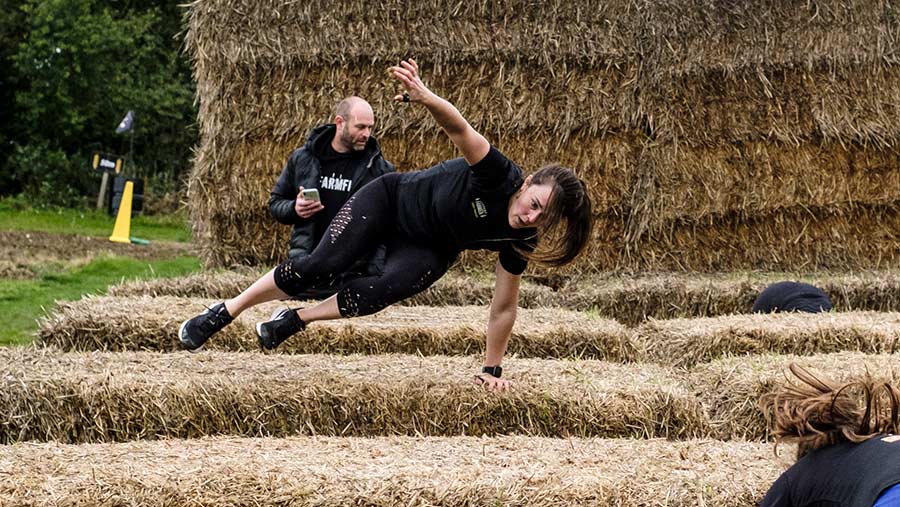 She runs the small community shoot on the farm and helps manage the conservation of meadows, wild bird covers and watercourses.

“My brother is now farm manager at our uncle’s farm, so I’ve picked up more responsibilities and enjoy the interaction the shoot brings and the solitude of jumping on my buggy to check the covers.”

Being a small farm, there’s a need for Emma to find other work part-time. She trained as an accountant and is gaining experience with running the farm’s diversifications.

The farm has gradually wound down its poultry, pig and arable enterprises, as economies of scale weighed against the family business.

“With Dad always looking at ways to secure our future, we’ve embraced diversification and converted three of our large poultry sheds into homes and office space, which we rent out.”

She entered Britain’s Fittest Farmer to challenge herself and to help raise awareness of mental health issues in agriculture, especially rural isolation – something she believes affects many farmers and country folk.

“A social life is important, as farming can be a lonely experience if you allow it to be,” she says. “The shoot on the farm is something we do for local farmers, it’s a good social.”

She also pushed to get super-fast fibre broadband installed for the farm and its many tenants. This took internet speeds from a pitiful 1Mbps/sec up to speeds that could handle the many video calls made during the coronavirus lockdown, meaning friends and family could stay in touch. 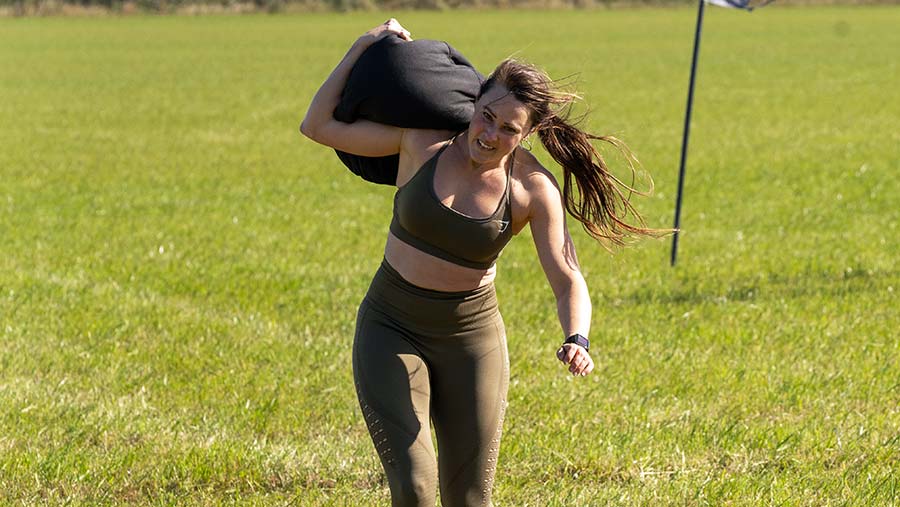 Emma went through a tough break-up after marrying her long-time partner, having their daughter Ellie and divorcing two years later. She says exercising regularly helped her through the lows and heartache.

“It was an emotional time and it changed me as a person. I was now a single parent, but I recognised the importance of family, friends and my health.

“I like keeping active, but I think I tunnelled more into it after this and it would help me open up to other people I was working out with.”

She enjoys running, has set up her own gym on the farm and takes part in CrossFit, a form of high-intensity workout.

“I’ve learned from my dad to go through life with a smile and I’m lucky that his attitude has rubbed off on me. It certainly helps whenever the stresses and strains of life begin to creep in.”

She says farmers need to recognise that having some time to switch off from the daily grind of life on the farm is important, even if that is 20 minutes a day to go for a walk.

“Maintaining a life balance and a resilience is key to both physical and mental health.”

Tough, rugged, agile – the new INEOS Grenadier 4X4 will share plenty of traits exhibited by the winner of Britain’s Fittest Farmer. That’s why we’re so pleased to be sponsoring this rural British physical challenge.

As an uncompromising, no frills, off-road vehicle, the Grenadier will provide all the capability, durability and reliability you need to tackle the toughest tasks on the farm. That’s why we see ourselves as the ideal partner for this true test of grit, endurance and strength.

For more information on Grenadier, pay a visit to their website.

Farm Fitness has rapidly become a burning beacon on the UK fitness scene, attracting spectators and participants from all over the country to come and take a swing at its almost alchemic blend of modified strongman, functional bodybuilding, calisthenics and blistering cardio efforts.

The gym, founded by farmer’s son Tom Kemp, was voted one of the best gyms in the world and ‘coolest outdoor space’ by Men’s Health (PDF)

Tom has blended his farming background with his love of training to create a raw and exciting outdoor environment for people of all strengths and abilities to get fit.

The charity has helped thousands of people deal with a variety of issues, including financial difficulties, animal disease, mental health and family disputes.

Volunteers provide free, confidential, pastoral and practical support to anyone who seeks help, regardless of whether the issue is personal or business-related. FCN also runs a confidential national helpline and e-helpline.