A foundation set up by the widow of an agricultural contractor who took his own life earlier this year is to hold training sessions for people working in agriculture to help spot when a farmer is suffering with mental health issues. 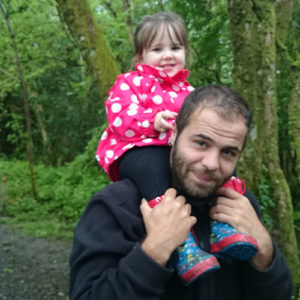 Daniel Picton-Jones with his daughter

Daniel Picton-Jones was just 34 and had two young children when he ended his life in July.

His widow, Emma, who grew up on a dairy farm, said his death had been devastating and had brought into sharp focus a huge problem surrounding mental health problems among farmers and others who work in the industry.

“Daniel had mental health problems all his life and he sought support when he was younger, but that support was not appropriate or specific to his needs, so it wasn’t effective.’’

Although she is struggling to come to terms with his death, Mrs Picton-Jones is determined there must be a positive outcome and has set up the DPJ Foundation. A core focus is mental health awareness training.

“We are involving people from across the agricultural sector, including vets, the farming unions and the Farm Liaison Service, training them to spot the signs and what support to offer,’’ explained Mrs Picton-Jones, who lives at Clarbeston Road, Pembrokeshire.

The foundation, which is in the process of registering as a charity, has so far raised £11,000, which includes donations made in memory of Daniel.

Mrs Picton-Jones said people suffering with mental health issues often needed support from outside the family and this is what the foundation offered.

“I could see the signs that Daniel might harm himself, but I was so close to him that I thought he wouldn’t do this because he had a family and young children who loved him.’’

The training sessions are to be held at the Plas Hyfryd Hotel, Narberth, on 16 23 November.

Spotting the signs of mental illness

David Bentley-Miller, who runs a law firm in Swansea, set up the mental health charity Pobl Cymru and will deliver the DPJ Foundation training.

Mr Bentley-Miller said the close-knit nature of the farming community often prevented farmers from opening up about mental health issues because of fears they would be judged by their friends and neighbours.

And farmers, in particular men, were unlikely to share their problems because of a perceived macho culture in farming.

It was important to understand that there are often no signs to suggest someone is suffering mentally, said Mr Bentley-Miller, but in others there are, and these are mostly linked to changes in behaviour: