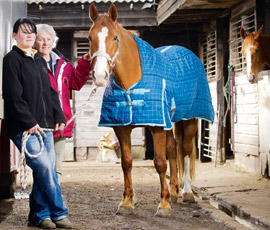 Horse rugs aren’t designed to stay clean. A horse seems programmed to roll around in the mud as soon as it is kitted out in a spotless outdoor rug.

Sue Bater, who ran a riding school in her native Vale of Glamorgan for 35 years, knows this only too well. Not only did her horses get their rugs mucky but they frequently ripped them too.

“Horses love to reach over fences and when they do that their rugs get ripped,” said Sue. “It doesn’t take much for the fabric to snag. Also, when they roll around on the floor the straps on their rugs break.”

When Sue gave up her riding school she was well aware that the smallholding where she lives with her family would not be enough to sustain them financially. The Baters run a small flock of sheep and sell free-range eggs but they can’t rely on the income from those enterprises alone.

Sue didn’t just want an enterprise that would create employment for her alone, but for her teenage daughter too. Nineteen-year-old Alyson is a part-time relief milker and also works on a livestock farm but was keen to develop a new opportunity. The pair have many contacts in the equine world and decided to use their knowledge of that industry to establish an equine rug wash and repair service, salvaging rugs that might otherwise have been replaced.

They established Stable Cottage Rug Wash in one of the farm sheds, investing in an industrial grade washing machine, dryer and sewing machine. “We wash, reproof and repair, whatever people need us to do,” Sue explained.

“Rugs can get filthy, even the indoor ones. Horses love a good roll and if a stable has mats on the floor then there is a tendency to use less bedding so when the horses lay down their rugs get quite mucky.”

The Baters once owned 15 horses and understand how much effort it takes to keep their equipment clean.

“We always found ourselves with a huge amount of rug cleaning to get through at the end of the winter. Domestic machines really struggle to cope with these,” said Sue. “There were always lots of repairs to be done. If the rug was a good-quality one it was more economical to repair it than to replace it. If is was looked after it could last a good few years.”

The Vale of Glamorgan has a high concentration of livery yards, racing stables and individual horse owners so it was an ideal location to locate the new business. Business was given an early boost at the start of the summer when customers brought in their winter seasons rugs before putting them into storage for the summer, and there are further expansion plans afoot.

The pair are developing a website to sell rugs and related products online. They’ve also piloted a pick-up service for customers which they’re hoping to expand by locating regular pick-up and drop-off points in South Wales. Since launching, the business has done so well that the Baters hope to invest in a second washing machine.

To establish the business, Sue had cashed in some of her pension but admitted she might have struggled to get started if it had not been for a grant aimed specifically at farming families. The ‘Pride in our Farming Families’ scheme, a rural regeneration initiative run by the Vale of Glamorgan Council, offers grants of up to £40,000 to support farmers and landowners in the region to develop new aspects of their business, helping to sustain the area’s farming economy.

“The £6,000 grant we were awarded was a tremendous financial cushion and having to develop a business plan really concentrated our minds. I’m sure a lot of other farming families will benefit from this scheme,” said Sue, who previously ran the Equine Department at Pencoed College, Bridgend. She is delighted that the business has created employment for Alyson and enabled her to stay in the area, although admits a mother-and-daughter partnership does present its own challenges. There is occasionally a clash over their different approaches to getting things done.

“Alyson is very organised and neat and tidy while I tend to have lots of tasks on the go at the same time and perhaps don’t keep things as organised as she would like them to be,” Sue explained.

But they have been able to draw on their individual strengths to make the partnership succeed. “I’m very much ‘old school’ and a hard worker and because I’m older I’m more confident when dealing with customers. Alyson is very good at putting systems in place. Between the two of us we do make a good team,” said Sue.

Initially Sue has been using her car to collect the rugs from owners but has now invested in a van. “I love the smell of horses but when you have rugs stained with urine and sweat it’s not the most pleasant smell to have lingering in the car.”

Get a Vale of Glamorgan grant

Stable Cottage Rug Wash has been hailed as an excellent example of how landowners can subsidise their income by expanding and diversifying their existing businesses. Nia Hollins, senior rural regeneration officer at the Vale of Glamorgan Council’s Creative Rural Communities initiative, said funding was available until December 2013.

“We look forward to receiving a range of varied applications from residents and businesses across the rural Vale which will both generate or safeguard jobs in the area and add to visitors’ appeal,” she said.