As one proud Berkshire farming family gears up to mark a big milestone, Oli Hill paid them a visit to get a snapshot of how a typical British farm has evolved over the decades.

Mother and son team Hazel and Dan Willis are thrilled to be celebrating 120 years of family farming at Rookery Farms in Curridge, a few miles north of Newbury.

Established in 1898 by Hazel’s great grandfather William “Fred” Cummins and his wife Elizabeth “Kate”, the beginnings of this family business were humble – starting out with just one cow and 10 shillings – that’s about 50p in today’s money.

400 head of Hereford and Angus cross fat cattle were introduced in the past 10 years as part of a plan to battle blackgrass.

“I’m very proud to be the fifth generation of this farming family and long my it continue,” says Dan.

Here we flick through this farming family’s fascinating history as a tribute to them, and all the other hardworking family farms that make Britain’s agriculture industry.

Hazel’s great grandfather William “Fred” Cummins and his wife Elizabeth “Kate”, set up their own farming venture with a cow and 10 shillings in their pocket.

“From what I understand, Kate was very much the driving force behind things,” explains Hazel. “She made butter and sold this and eggs at Newbury market.” 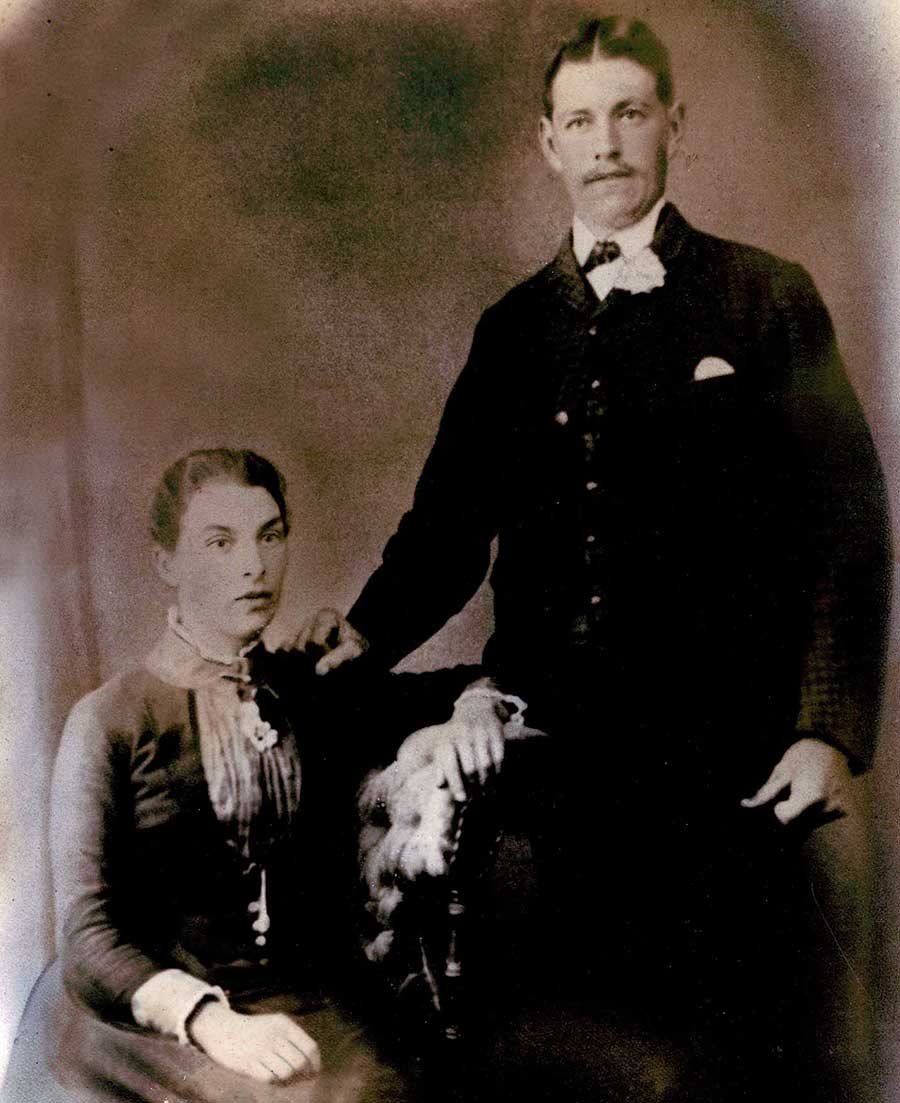 The couple moved with their two children, Charles and Alfred, to Maple Farm, Highclere, renting land from the Canarvon Estate – home to the Highclere Castle, best known as Downton Abbey in the ITV period drama.

Here the family ran a mixed farming enterprise, milking cows and rearing calves, pigs and chickens. “To help their income they sold a lot of straw and forage to the landed gentry who owned horses,” says Hazel. 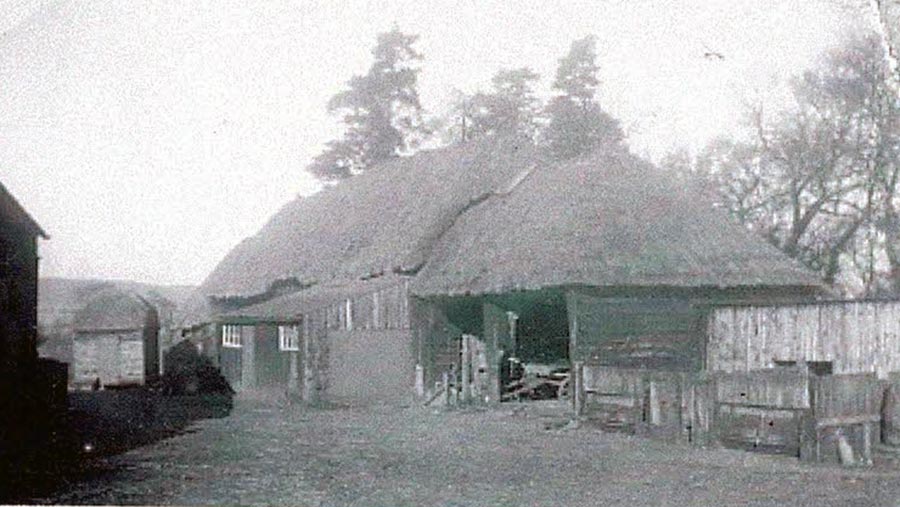 Farm buildings with thatched roofs at Maple Farm in 1905.

Eldest son Charles left the farm for a career in the police force, while Alfred stayed to work alongside his father.

Now married to wife Irene, Alfred lived with his young family in a cottage next to Maple Farm. After his parents died in the mid-1930s, the farm tenancy was transferred to Alfred. 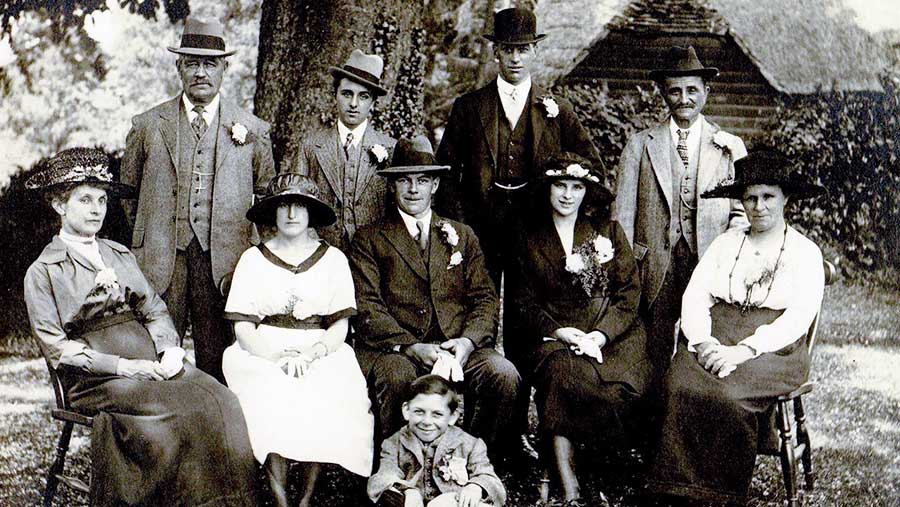 This photo was taken when Alfred (centre, front row) married Irene (second from left, front row) in 1921. Kate is sat on the far left with Fred stood behind her

He continued the mixed farming enterprise as well as the sale of forage to horse owners, which was a vital income stream to keep the farm going during the Great Depression – a time when many other farms went to the wall, notes Hazel. 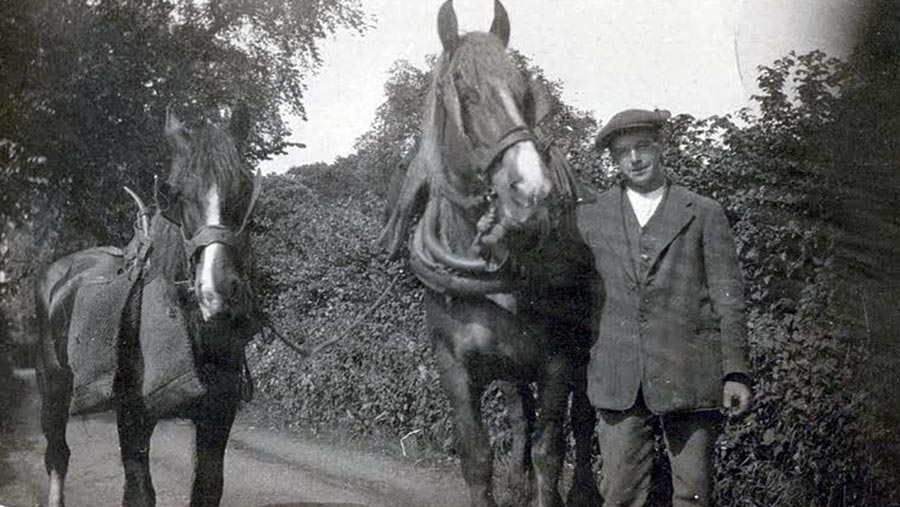 Alfred with the two farm horses in the 1920s

Alfred’s eldest son Harry was keen on setting up a dairy herd of his own and went to work on a large milking unit away from the family farm.

With farm mechanisation gathering pace through the 1930, Alfred’s other son Cyril – who is Hazel’s father – left the farm to work as an apprentice agricultural engineer at a number large garages in Newbury. 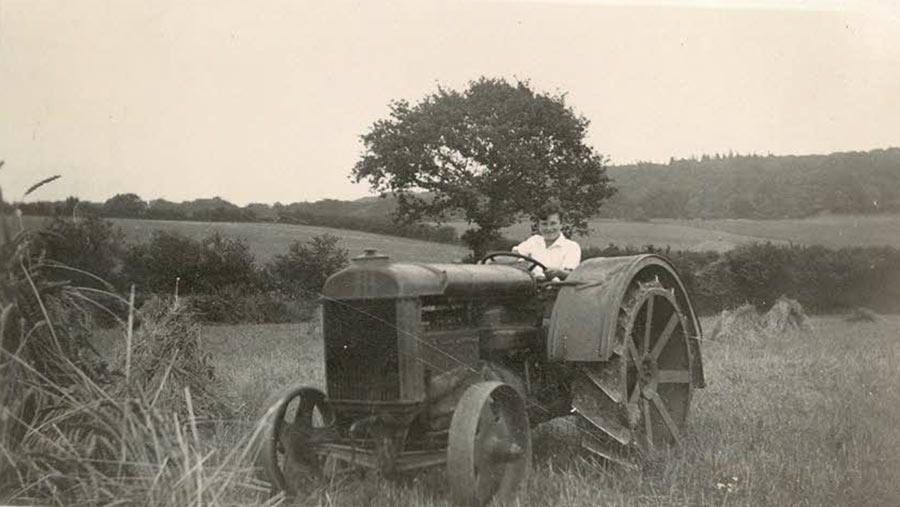 Harry and Cyril returned to work on the family farm and in 1948 they went into partnership with their father, taking on more rented land. Cyril was in favour of purchasing some land to help secure the farm’s future. 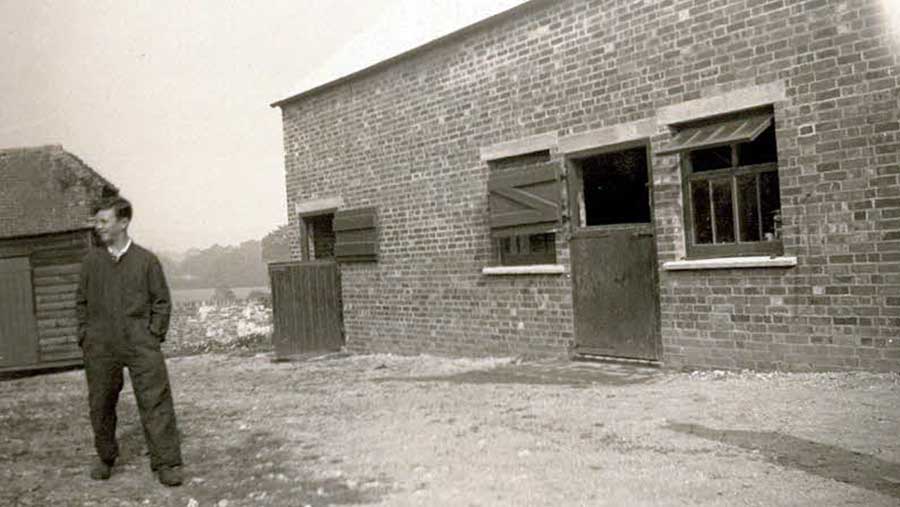 Cyril, aged about 15, stood outside a modern brick cattle shed at Maple Farm

“My father Cyril was very keen to buy land rather than rent because if anything happened to my grandfather then they would lose the farm tenancy,” explains Hazel. “Grandfather was a cautious man and was always very worried about money.” 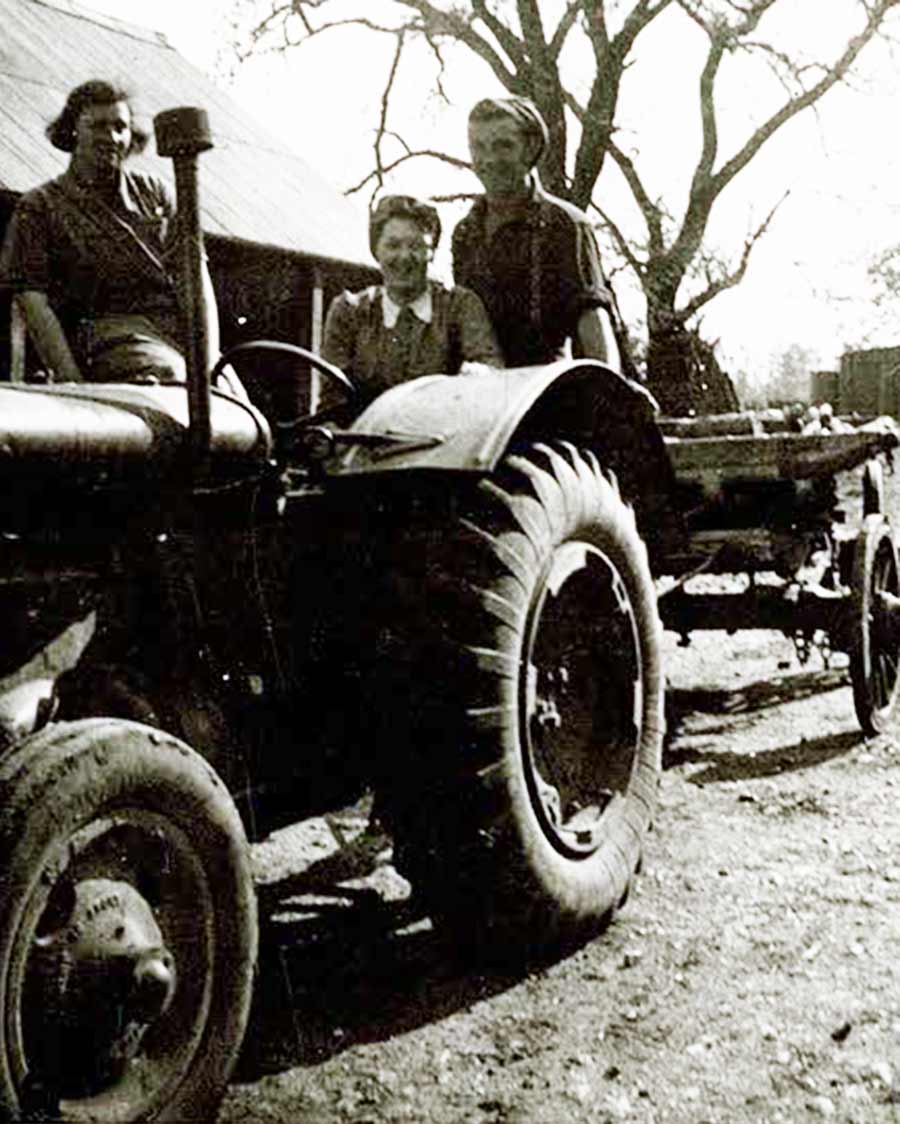 Land girls on Maple Farm during the Second World War

During the Second World War, the farm had German and Polish prisoners of war working in the fields and Canadian soldiers staying in the farmhouse.

Hazel remembers first sitting in the driving seat of a tractor when she was four years old, being tasked with steering across a field while feeding the cattle with kale.

See also: Wasps’ James Haskell on his love of rugby, music and JCBs

Cyril bought Town Farm in Buttermere, Wiltshire in 1950 and a year later he moved in with his wife Vera and children.

“The big farmhouse was very old, about 700 years, and was in a terrible state,” recalls Hazel.

In 1954, Harry bought Warrenhill Farm in Wallingford and moved his family there to start his own dairy enterprise.

Alfred died suddenly in 1956 when he was just 55 years old and the original Maple Farm tenancy could not be renewed. 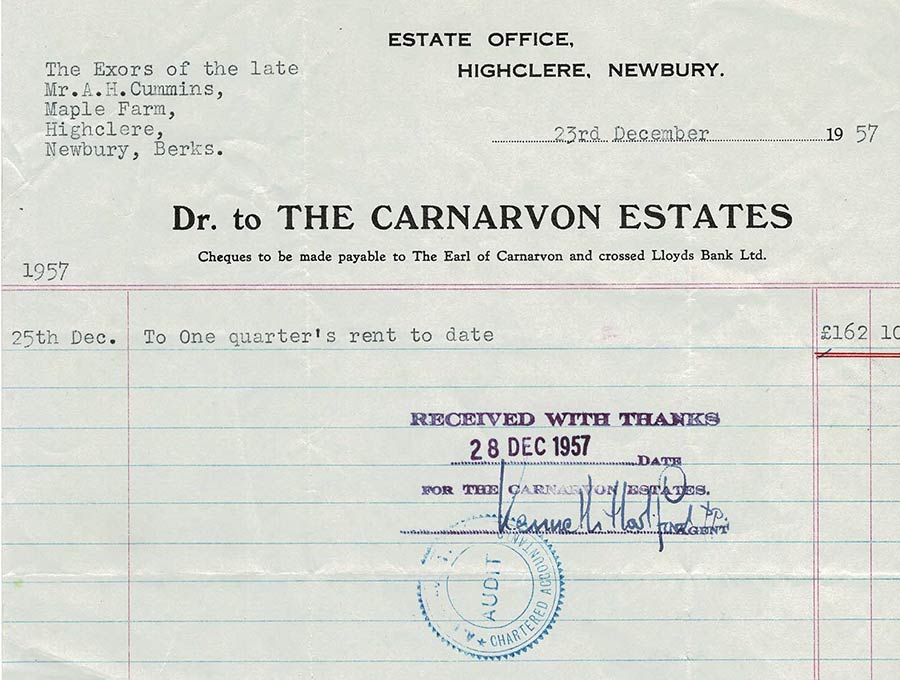 The final rent invoice for Maple Farm after Alfred’s death, issued to the family on Christmas Day

Alfred’s two sons decided to dissolve their partnership in 1960 and from there on Cyril traded as FC Cummins. 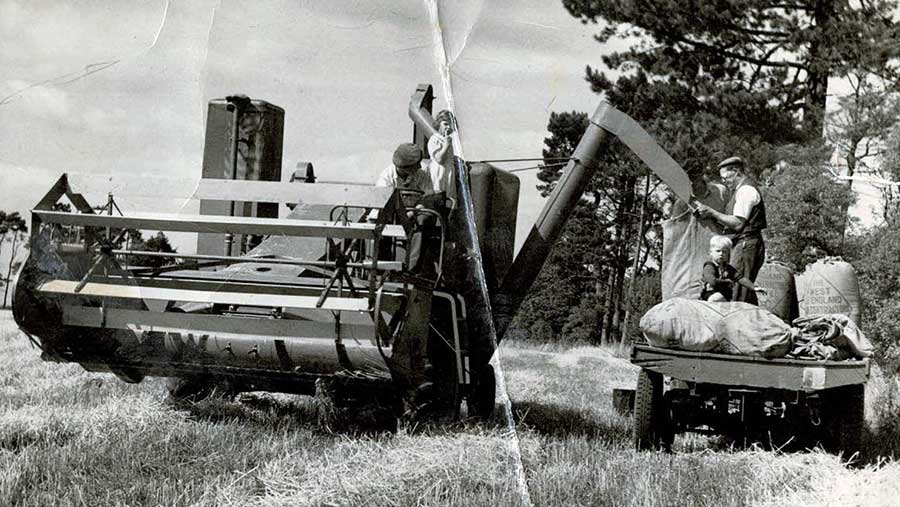 The first combine harvester at Town Farm in 1960. A young Hazel is stood on the back of the combine, while a farmworker holds a filling sack of grain and her younger brother Fred sits on the trailer

With his plan to buy land rather than rent, Cyril continued to expand his arable enterprise growing barley and grass for seed.

Producing, buying and selling hay and straw again became an important revenue source throughout the 1960s, taking forage to markets in Chippenham and the West Country and then delivering to buyers in Wales and the South West. 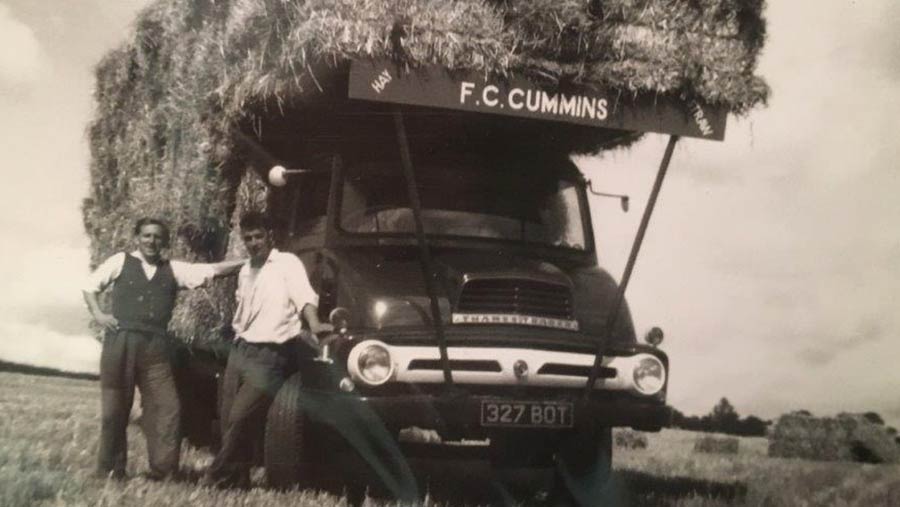 Numerous farm and patches of land were bought and sold throughout this decade, including Rookery Farm, where the family business is still based today.

Other brother Stephen had his own haulage business, transporting the home farm’s grain and also picked up contracting work for a large co-operative group.

This decade saw Hazel and Stephen join the family farm partnership, with Hazel taking charge of the admin work. She also set about growing the horse feeds side of the business.

In 1981, the farm office got its first computer. “We needed one to help us keep up with an awful lot of paperwork to keep up with the grain traders, store and co-operative. All the information had to be sent to Southampton and this was very time consuming.

Eventually the grain storage and export side of the business became too big to handle and the grain stores were rented out to an animal feed business.

Dan started working on the family farm, while also renting some land of his own and doing contract work for others.

“Dan has always wanted to be in farming. I can remember when he was four years old and he would be outside harrowing the garden with a rake,” says Hazel.

The farm partnership was dissolved in 2010 as many partners wanted to retire, leaving Hazel and Dan to continue as a team at Rookery Farm. 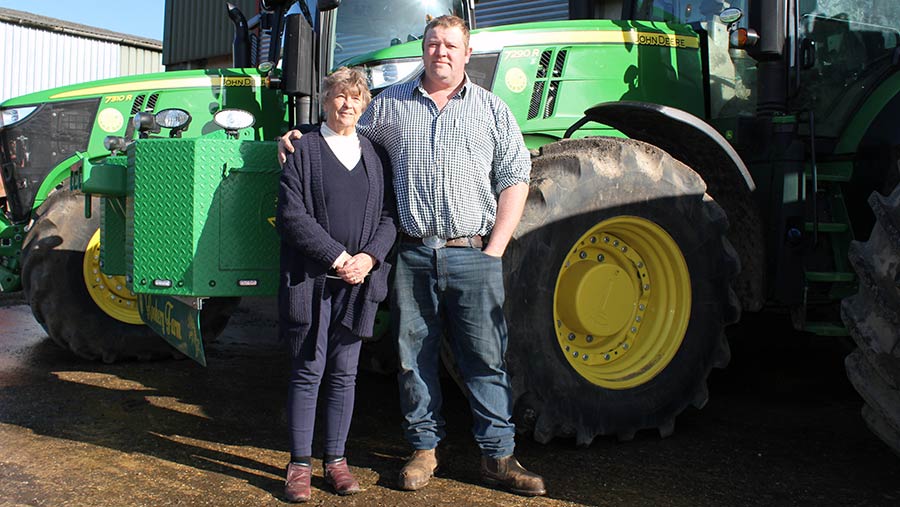 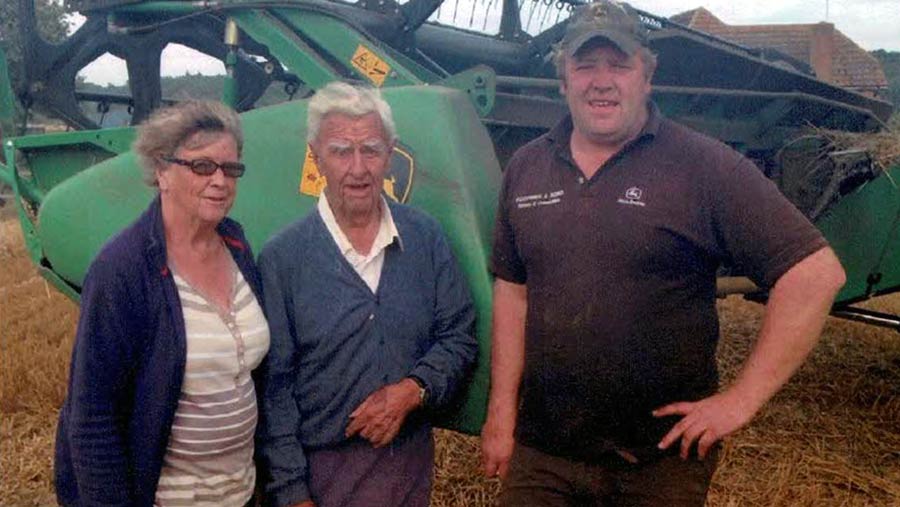 Cyril Cummins with his daughter, Hazel, and grandson, Dan, during the 2015 harvest campaign