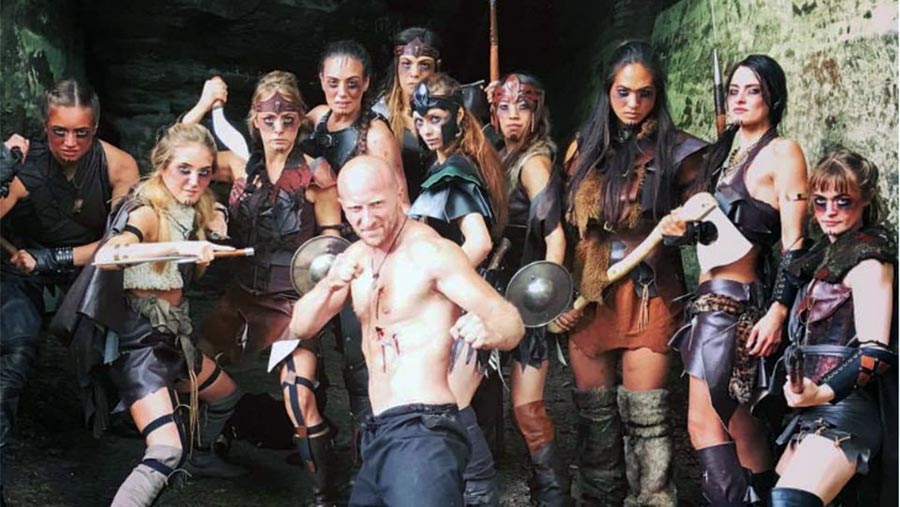 One minute farmer Clare Duncan is sampling soil, the next she’s riding a horse across a beach in the epic battle scene that went on to define last year’s blockbuster movie Wonder Woman.

The Hollywood film industry couldn’t be further removed from Clare’s rural life, where she combines work on her family’s farm just outside Upton, on the Wirral, with a job at S&S Agricultural Liming. One thing’s for sure though, she’s having enormous fun doing both.

Her debut playing an Amazonian warrior alongside big names including Wonder Woman herself, actress Gal Gadot, and House of Cards’ leading lady Robin Wright, came about after she was asked by a friend at the gym where she trains if she would be interested in attending a casting to find ethnic horse riders for a film.

“It all came very much out of the blue and I just remember thinking ‘why not’?” says Clare, who farms alongside her dad Miles across 120ha, which is split equally between grassland and arable growing wheat and oilseed rape.

“I didn’t know what the movie was – we didn’t find out it until filming was about to begin – but I went down to London for the casting, where we had to ride the horses so they could see what we were capable of.

Luckily Clare is a pretty competent rider having done it from a young age, so this wasn’t anything out of the ordinary for her.

The 25-year-old received a call soon after offering her a part, which would see her involved in one of the film’s most memorable scenes – when the Amazonian warriors, armed with swords and other deadly weapons, charge across the beach to attack an advancing German enemy.

“Living on a farm, testing soil for a living, I had no experience of the film world, so I had no idea what to expect in the slightest.

“It was very exciting to know I had a part in a film – and then to find out it was Wonder Woman was really special.”

“The set was a different world. To be able to work with a team of people who were all so disciplined, motivated and strong mentally as well as physically – it just changed my life. I know it’s a bit of a cliche, but it has.

“The battle scene was incredible to be part of. It just looked like we were going to war, we were all in our armour – we meant business.”

Clare Duncan on the set of the film Wonder Woman

Juggling her work on farms with filming has the potential to be a logistical challenge for Clare.

Last spring she spent two-and-half weeks on location just south of Naples on Italy’s Amalfi Coast, and says that being organised enabled her to take time off from the soil testing role she’s had for seven years, covering the North-West and north Wales area.

“Within the team I work for we all follow the same principles, so when I pass my accounts to my colleagues there’s a smooth transition and my customers have continuity,” she explains.

Since completing her stint on Wonder Woman, Clare has reunited with her fellow Amazonians for scenes in Justice League, and after responding to an email also landed a speaking role in British independent film The Dark Kingdom, due out this year. Clare will play the role of Kateya, a woman warrior.

“I love my work, and always say it never feels like a job, but when things like this happen, you just have to embrace them.

“It’s great that films are starting to feature more ethnic diversity and I’m pleased to be part of that,” adds Clare, whose heritage is half Hong Kong and half Chinese.

“Films like Wonder Woman do not come along very often, so I was thrilled to be involved. I’m really enjoying it and my customers love hearing all about what I’ve been doing, too.”