With fresh thinking and bags of energy to back them up, young people can make amazing entrepreneurs.

Taking on the extra work of starting up a new business may seem daunting for many people, so imagine launching a venture while also attending lectures, writing essays and revising for exams.

We spoke to inspiring students who are juggling the world of commerce with their academic work to find why they decided to take the leap and how they manage such a bold move. Meet the students who mean business.

Never take chairs to a show or event – however much time you are going to spend on your feet.

That’s one of the abiding rules of John Davies and Hannah Kinston, who run a thriving cheese retailing business in tandem with their university studies.

The principle is a simple one: if you take chairs it’s tempting to sit down. By moving around, greeting potential customers and being enthusiastic, you can be more welcoming and get people to visit your stand. 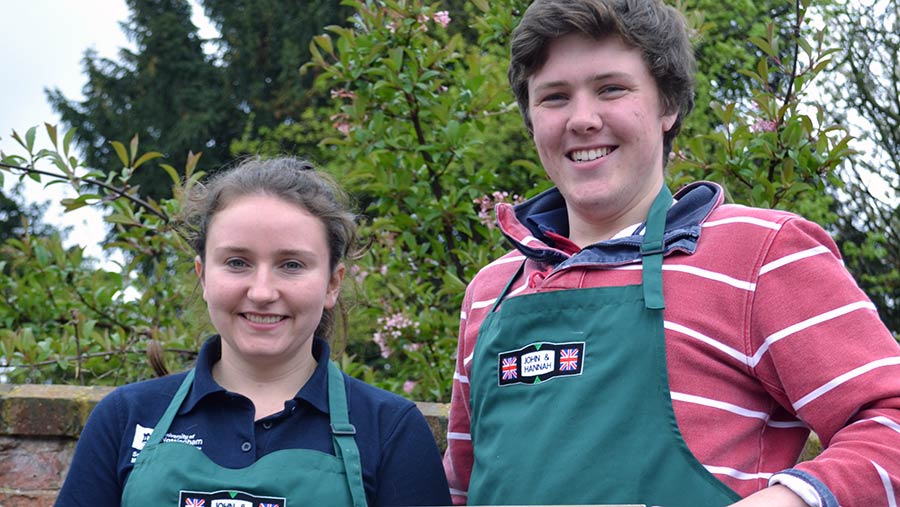 “About half the people who try will buy – but you’ve got to get out there and talk to them, rather than waiting for them to come to you,” says 21-year-old John.

John and Hannah’s top tip: Ask customers lots of questions and really listen to what they tell you.

They launched the enterprise in 2016 and now offer a range of more than 15 products at shows, via hamper orders and through farm shops, including the one at Chatsworth House.

They will attend 20-plus shows during 2018, including the Leicestershire County Show and the Ashby Show. The annual Open Farm Sunday event at Hannah’s family farm near Burton-on-Trent is another big date in their calendar, typically attracting about 2,000 visitors.

Visitors are fascinated by “the girls” – the Jersey cows that produce some of the milk that ends up in their products.

“People, especially more elderly ones, like the fact that we’re doing this,” explains 20-year-old Hannah. “There can be a perception that young people are lazy and just mess around, wasting their student loans – so they like to support us because we’re working hard and really trying to make a go of this.”

For John, reading agri-business at Harper Adams University, and Hannah, studying veterinary medicine at the University of Nottingham’s Sutton Bonington, it’s not always easy juggling a growing business with their studies.

“There have been times when we’ve been surviving on between two and six hours sleep a night, but it makes sense to go the extra mile to establish the business at this point in our lives,” Hannah says.

See also: Job profile: What’s it like to be an agronomist?

Their approach is to set prices at levels that are “accessible for everyone” to capitalise on the exploding demand, partly among the younger generation.

“You used to see burger vans outside nightclubs – now it’s vans selling cheese toasties,” says John, who is from a family farm in Snarestone, Leicestershire. “Younger customers always want to try the chilli smoked cheddar. It’s got a real kick to it.”

For this entrepreneurial couple, cheese could also prove a stepping stone to something bigger – they’re currently rearing a small batch of rose veal calves and, potentially trading as Jersey Boy Beef, are exploring opportunities to sell prime meat cuts and luxury burgers.

Ideas come from the most unexpected places, according to Luke Craven.

This Royal Agricultural University student had his eureka moment in the car when he passed a van transporting insects for reptile food.

He’d recently learnt during his international business course about how a world protein shortage was looming.

Put the two things together and he and his now-business partner, Adam Gray, forged their big idea – farming crickets for human consumption. 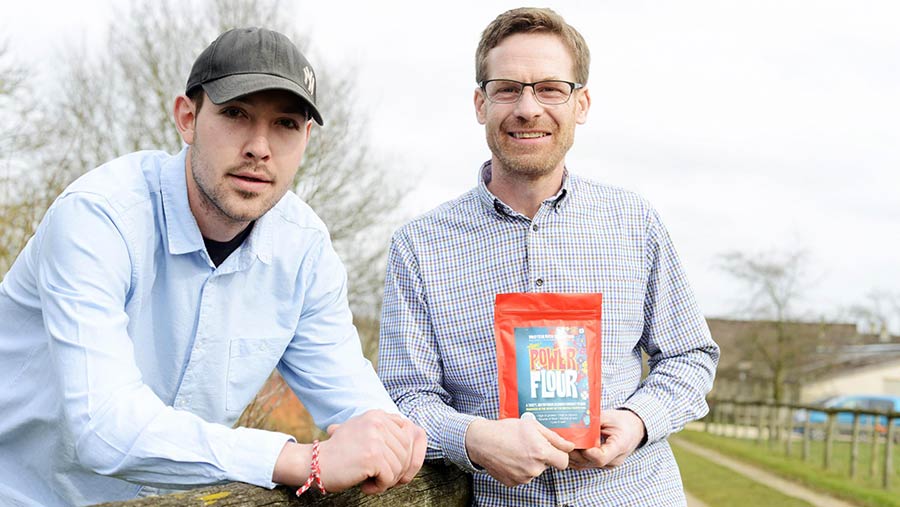 There’s a huge demand for sustainable protein sources and the pressure on farmland from housing is getting ever greater.

The duo realised that crickets could be kept on a small piece of land, their methane emissions are minuscule and they are a great source of protein.

And so BiJimini was born, a Wiltshire-based business that produces a cricket flour, using organic flour from local millers blended with a fine-milled cricket powder.

Using them in a pre-mixed flour was a very deliberate decision, to avoid having to sell them whole. “This avoids the ‘yuk’ factor,” explains Luke.

BiJimini farms tropical house crickets, which are indigenous to Asia. They sourced the original breeding stock from the Netherlands, and now breed their own.

Luke’s top tip: Do your market research thoroughly before you launch – you can never do too much of this.

It’s been a massive challenge learning about the breeding, feeding and environmental conditions in which they perform best.

“One day, we’d like to get the product certified as organic, but at present there’s nobody that will do this because crickets are so unusual,” Luke says.

They currently sell face-to-face on a relatively small scale and through their recently launched website, but hope to start retailing their tasty PowerFlour via online supermarkets soon.

While he reckons it frequently feels as if there are not enough hours in the day, there are big synergies between running the business and studying. “What I’m learning on the course is hugely helpful to the business, and vice versa.”

The pair won the RAU’s Grand Idea Awards in 2017, netting a £10,000 prize and ongoing support from the university, such as providing stand space for them at this year’s Badminton Horse Trials.

“When you start a business, you’ve got to believe in yourself and your product. If you’re going to do it, just go for it,” says Luke.

You’ll never get a better time to launch a business that when you’re a student, according to Chris Webb.

You probably haven’t got any dependants, you’re unlikely to have a mortgage or assets to lose, and you’re surrounded by lecturers who’ll offer you free advice, he says.

Now 40, Chris launched a calf-rearing venture with Chris Roberts and Larry Anscombe in 2014 when he was a mature student at Reaseheath College. 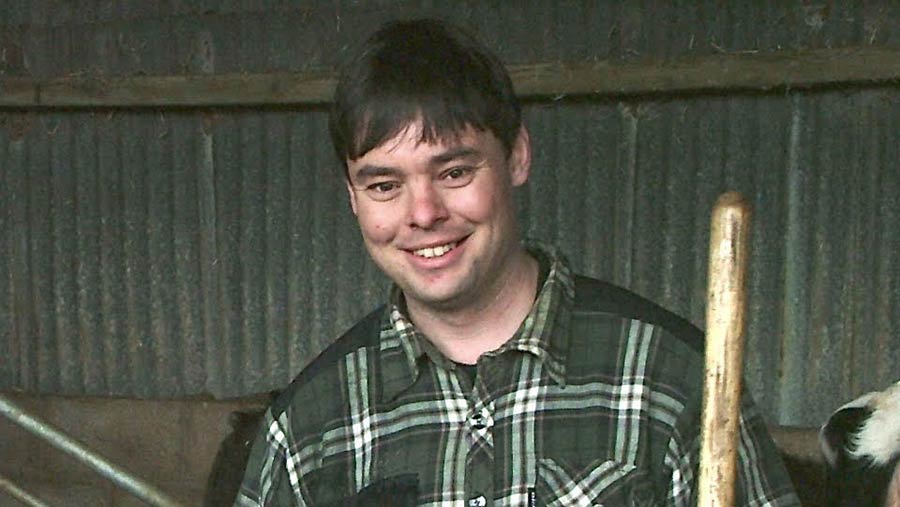 At the time he was studying agriculture, selling a technology business he had started a few years previously and getting the calf enterprise off the ground. Time management quickly became a key skill.

“When you put together an idea for a farming business, it’s not necessarily a case of finding a big gap in the market because they may not exist. It’s more about considering what skills and resources you’ve got and how to use these in a way that isn’t already being done by too many other people,” he says.

“Calf rearing didn’t require land or millions of pounds of investment and has a relatively high gross margin. It’s also quick turnover, so better from a cashflow point of view compared with finishing beef cattle, which can tie money up for 18 months or longer.”

Chris founded his first technology company when he was an undergraduate studying maths at Cambridge in the 1990s.

Chris’s top tip: Pick an enterprise that makes best use of the assets, skills and resources you have. If you haven’t got land, there are plenty of enterprises that don’t need it.

“My background gave me a slightly different perspective. My instinct is to automate to make processes more efficient.

“We’re quite data driven – I like to know exactly what the calves drink and eat, what they’re costing us and how quickly they grow.

“You have to know your own strengths and capitalise on these. Similarly, be honest with yourself about your weaknesses. For example, I really enjoy working with the stock but I’m not a natural salesman or tractor driver.”

The Shropshire-based business, which now rears about 1,000 calves a year, buys stock at two to three weeks old, then sells it at 14 to 18 weeks old.

“I’d definitely encourage people to get an enterprise started when they’re studying. You have to pick a sector you enjoy because you won’t have the same drive and commitment if you don’t enjoy it.

“It’s the love for what you do that’ll get you through the tough periods. I really enjoy working with cattle, especially youngstock, and calf rearing is awesome.”