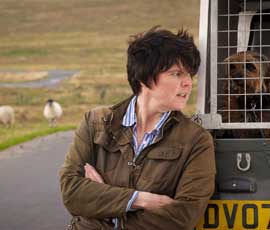 Over the last couple of weeks, they have managed to block our chimney twice, having the effect of partially gassing us, before finally knocking out the boiler altogether.

Jackdaws have shot straight into the top three in my list of least-loved creatures, right up there with midges and ticks.

Why are they doing this? Our house is surrounded by trees. If you were a bird, wouldn’t it be easier and healthier to make a home in one of those? But no, they prefer to pull a wire cage off a chimney and drop a load of twigs and wool down the hole, on the off-chance that some of it will wedge enough to form a nest. Thanks a lot.

It has taken two heating engineers and two intrepid men on the roof with poles to sort the job out. But at last the heating is on and the chimney has been heavily fortified, so we will see if this is effective. The birds are currently sitting on the redundant TV aerial planning their next move.

I have heard of people resorting to more extreme measures against bird pests. Local drivers near a certain farm in the Borders always used to take extra care if they found themselves following the proprietor’s Shogun. The vehicle would stop without warning, a shotgun would emerge from the driver’s window, and a message would be sent to the crows on the crops with both barrels. In other parts of the country this would be termed a drive-by shooting, but in the Borders it was simply a local traffic hazard.

We are in the midst of lambing here. It has been hard work, with lots of lambs needing to be suckled, but so far not totally disastrous. The sheep have plenty of milk – it just takes a lot of time getting the lambs set on to drink it. Matters have not been helped by the fact that the cows are calving later than planned, due to initial bull fertility problems. So new life is spilling out all over the place.

Jake is very tired and the children have returned to school exhausted after their holiday. Julia’s fingers looked as if she had acquired a 60-a-day smoking habit. In fact, they were stained with the iodine from spraying newborn lambs. This proved very difficult to remove.

Although Jake and Julia had to work all day, Archie and I did get out for lunch at Easter with some relatives. This involved a long drive over private roads and mountainous terrain. I won’t say where it is, but if you know Beyond, it was just at the back of there. Normally, Jake takes the wheel on these outings. I just sit gripping the seat and leaning in the way you would as a sidecar passenger to stop the motorbike flipping over. I’m not sure whether this actually does any good in a Land Rover.

I was encouraged to take a slightly different route home, which was a big challenge for an unadventurous motorist such as myself. This was particularly so as it involved a ford and I still have bad memories of an incident that led to the car engine having to be replaced. In between the stream, the scree and the almost vertical drops, I did pause to admire the view. It was stunningly beautiful – hills, valleys, trees, grass and not a house in sight. Though not so good if you did happen to come off the track and end up requiring help. With this thought in mind, I continued slowly but ultimately safely back to a metalled road and home.

Archie has returned to school much wealthier than before. This was largely due to him benefiting from a £2 each way bet on Neptune Collonges in the National at the generous odds of 40-1. Nice work if you can get it. Indeed, I feel that it may occur to Archie that there is much nicer work than traipsing around in the cold and wet looking after sheep all day.

As far as this year’s National goes, we really enjoyed watching it and found the finish very exciting, not least because we had small family bets on both the first and the second.

When the judge announced the winner, my thoughts were: 1) I’ve lost; 2) Stop yelling, Archie; and 3) I’m sure I recognise that voice. I believe that this is the first occasion when the winning distance in the National has been a nose in a photo-finish and also the first time the judge for the event has been the chairman of Glendale Show. Spooky.

It was very sad news to hear subsequently that two horses had to be put down as a result of sustaining fractures during the race. Given all the adjustments and precautions that had been taken, it was pretty bad luck too. I’m sure no-one could or should be more upset than the owners. The outpouring of outrage in the media, whilst predictable, was both ill-informed and completely over the top.

Elizabeth Elder and husband Jake – who have two children, Julia and Archie – farm 235ha of hill ground on the Otterburn Firing Range in Northumberland.

• Brought up on a dairy farm, Elizabeth is an accountant by training, with a background in corporate finance and business appraisal.

Read more from Elizabeth on our dedicated page.