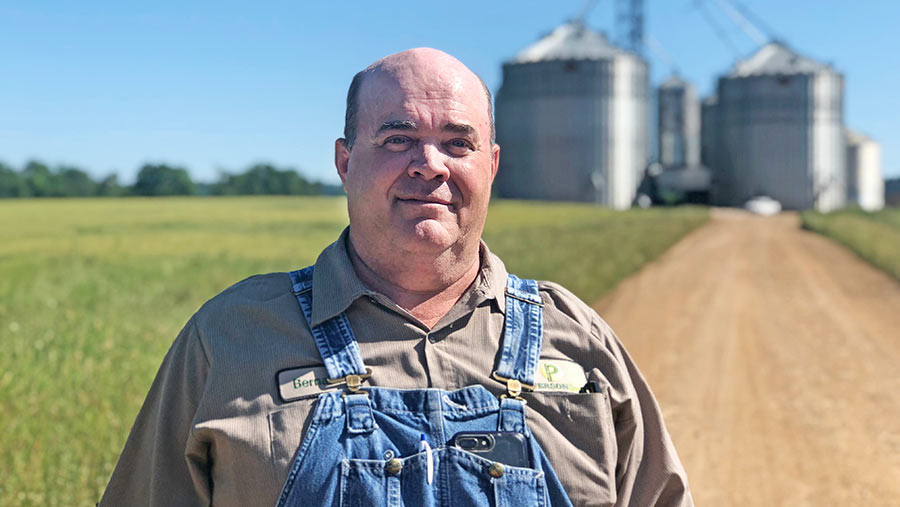 The Peterson family has a long farming heritage – the current partners are the 13th generation to farm. Three brothers – Billy, David and Bernard – and Billy’s son, Albert, make up the management team.

They oversee a large-scale arable enterprise in Loretto County, Kentucky, that stretches from Peterson Farm to a bourbon distillery a few miles up the road, and reaches markets as far afield as south east Asia.

See also: Job profile: What’s it like to be a land agent?

Up until 1974, the farm had been focused on dairy and only produced grain as homegrown feed. It was when Bernard’s grandfather sold this farm and moved to new premises that things changed.

“We were dairymen up until the late 1980s when we left for economic reasons and because my father and brother didn’t want to do it any more,” explains Bernard. The farm had its own milk bottling facility, but large-scale operations made this untenable for the future.

The business evolved into growing cattle feed, but as the cropping area grew it outstretched feed requirements.

“We were involved with the local distilling industry from 1956 when my father had the stillage leftovers from the bourbon for the cows,” says Bernard.

As the arable enterprise grew, so did the neighbouring distillery, and upon realising that the Petersons could supply it with maize and wheat from only five miles down the road, the relationship solidified. 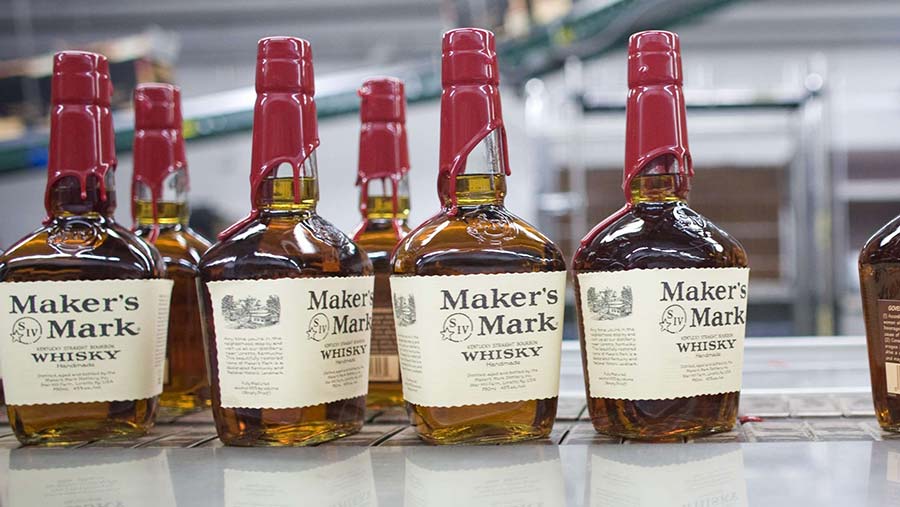 Some 25 years on from starting to supply the distillery, the Petersons are now the only supplier of the red winter wheat that goes into producing Maker’s Mark bourbon.

This type of whisky needs to consist of at least 51% maize, so the Petersons farm also supplies this crop while shipping some to the renowned Buffalo Trace and Jim Beam distilleries.

One of the challenges in supplying distilleries is availability of grain, as the distilleries need deliveries almost every day of the year due to limited on-site storage.

To overcome this, the Petersons have installed two grain stores on their property and run their own haulage lorries.

Not only do they need be able to deliver at short notice, quality must be high. Maize should contain less than 1% foreign material and have less than 1% damage, while moisture needs to be at 14% – this pushes up production costs.

As well as maize and wheat, the farm also produces non-GMO soya beans, which are sold for export. It runs a no-till operation to minimise erosion and maintain soil health.

“Diversity in crops offers us security and when it comes to marketing, we use all the resources we can to predict the market, and make the most of good opportunities when they appear,” says Bernard.

Succession for any farm business can be a tricky subject, but the Petersons have taken a pragmatic approach to ensure the survival of the business for future generations.

It’s a good job too, as Bernard’s grandfather had 11 children and 55 grandchildren.

The current management has been split up between the four partners – David, Billy, Bernard and Albert – tailored to their strengths.

David handles the hedging of grain and commodity prices, Billy focuses on developing land and conservation, Bernard focuses on marketing, financial analyses and new technology, while Albert is operations manager.

But with more members of the family coming up through the generations the team have a  policy to make sure the farm continues to work well for everyone.

Communication is key to make sure everyone is clear on their role within the operation now and for the future.

“We have a common goal that resonates with the entire group,” explains Bernard. “This includes family members who may or may not be involved in later years.”

Having a flexible approach has allowed the family to adapt the business when opportunities arise. “Whatever the plan we meet, discuss and update regularly,” adds Bernard.