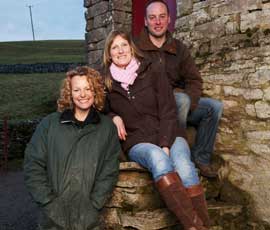 One of the BBC’s flagship farming programmes, Lambing Live, has returned to TV for the second year running with presenters Adam Henson and Kate Humble exploring life in the hills of Cumbria, joining the Marston Family in the Eden Valley.

Farming 700 sheep, the operation near Kirkby Stephen is a family concern with father and son Donald and Andrew Marston as well as Andrew’s wife, Rachel, and his mum, Christine, all working to keep things running smoothing on the land that has supported their family for 99 years.

Mr Marston told Farmers Weekly that it was a privilege having the BBC filming on their farm, and that the show was a snapshot of their ordinary lives.

“We don’t look at ourselves as something special, we’re just ordinary farmers – and every farmer has a story. This is our story.”

In the latest episode the BBC crew battled rain and strong winds with the live signal from the farm being repeatedly interrupted.

“Wind and rain got into the wires and there’s a safety device that stops you getting electrocuted, but it knocks the power off,” said Mr Marston.

“It’s not too good for the BBC and not to good for anybody really, but they’ve just got to pick up the pieces and follow the first because I think the first night’s programme was really good.”

But it’s only through chance that the Marstons feature on the programme at all, with neighbouring farms originally receiving preference over their operation.

“They [the BBC] wanted a hill breeder that farms his lambs outside, so the local sheep association gave them a list of people that were suitable. Our name wasn’t one and I can understand that,” said Mr Marston.

“They did give them the name of a neighbour of ours and he contacted him but he was no good because he lambed inside and he lambed before the programme was scheduled to air. He would be finished now.”

“They then suggested us and they came to see us and took a video of us and then we were shortlisted with two others.”

Mr Marston and the family weren’t too excited about the idea of appearing on television before millions of viewers but they overcame their anxiety in the end.

“We thought we should do it for the younger generation as it’s something they’ll never forget. We were a bit cautious about what would be involved but I’ve got to say the whole BBC team have just been fantastic.”

The only issue, Mr Marston says, is feeling like they’re not doing enough for the cameras.

“When you’re talking on camera you just think you’re talking to Kate Humble. You don’t realise there are people watching and to be honest you feel a bit guilty because you’re just so busy on the farm.”

“Last night I was bringing sheep and lambs in until 7.50am. Then I had to dash in get washed sort of do my hair and back out again.”

“The night before last we went to bed at 11pm and we got up at 2am and at 4am, then at 6am. So I mean, in a sense, we feel guilty because we haven’t been able to put as much into the programme as we’d like. It’s just a good job that a lot is pre-recorded.”

While having a team of sound engineers, camera operators, assistants, make-up artists and lighting crew following them around during their day at time became a hassle, the long line of hangers-on did make themselves useful mucking in with farm chores.

“They do slow you down a bit obviously. Sometimes they want a retake or they ask you about what you are doing or why you are doing it while they get the cameras setup,” said Mr Marston.

“The privileges outweigh them slowing you down and because its lambing time they have been helpful. Some of the crew have been coming into the fields, watering the sheep and bedding them down. They have been an asset.”

Having a catering team on site was also helpful as the Marstons can grab food when they are hungry, when in previous years Mr Martston said they would just keep going.

Despite the exposure of being featured on national television, the Marstons don’t intend to try and capitalise on their fame, with no plans to diversify into anything such as a farm shop or a bed and breakfast.

“I know you should diversify as farmers but I mean, yeah, we could go out and work and neglect your cattle and your sheep and you’d probably be better off. But if I couldn’t look after my animals I wouldn’t want to farm,” said Mr Marston.

“I’d rather be one or the other and if I couldn’t afford to farm I’d pack it up.”

Eagle-eyed viewers have been discussing on Twitter how new some of their pens look in their barns but Mr Marston said they are just the same ones from last season. All that’s been done between then and now is everything has been washed out.

“We haven’t spruced anything up, although we did pressure wash all our pens out from last year. We haven’t done anything different from what we normally do,” he said.

The Marstons hope people enjoy the brief look into their lives, at one of the busiest time of their year, and they hope the give a truthful image of their family.

“It’s nice that they want to watch and I hope they have found pleasure in the photography and what we do or say. I hope we come across naturally because we haven’t had time to be anything else.”