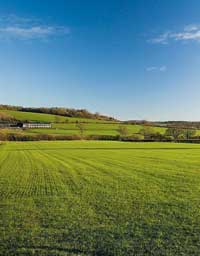 Large well-equipped dairy farms capable of carrying 300-plus cows are a rarity. Lower Farm and Penny Farthing in Lillington, near Sherborne, Dorset is the first large commercial unit to come to the market in the area for some time and will draw interest from far outside the county as well as from neighbours.

The farm has two four-bedroomed houses, 380 acres of pasture and arable land and 50 acres of woodland.

The modern dairy buildings including cubicle housing for 332 head were originally developed in the 1970s.

The farm has been lotted into two for the sale.

Lot two, meanwhile, includes the vast majority of the farm. Lower Farmhouse, with an agricultural tie, has 430 acres and the farm buildings. This has a guide price of £4m, which includes milk quota and single farm payment entitlements.

As well as the main dairy building there are a further four steel portal frame buildings, and a six-bay silage store, covered yard, slurry store and separator. (Symonds & Sampson 01935 382 907)