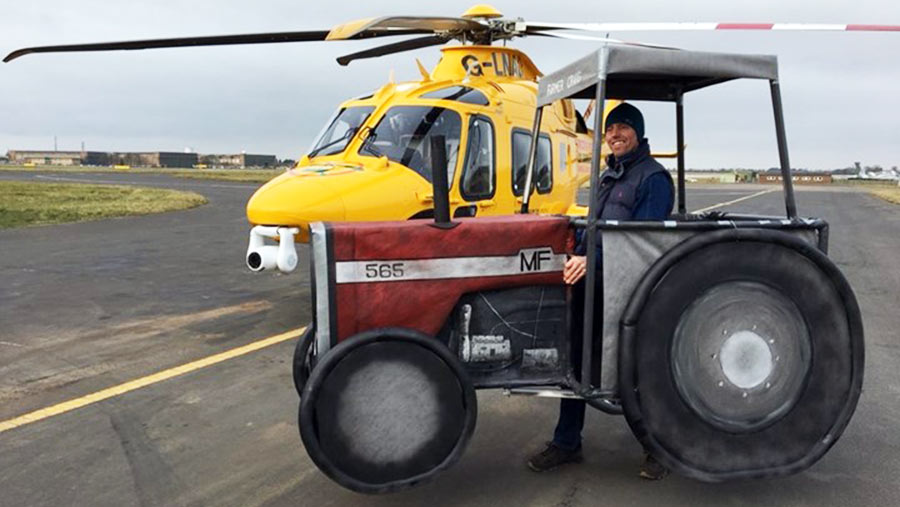 For most people, running a marathon would be hard enough without wearing a cumbersome tractor costume, but that’s precisely what Lincolnshire farmer Craig Williamson plans to do.

After completing the London Marathon last year, he’s gearing up to do it all again on 22 April, this time while wearing a fantastic Massey Fergusson 565 costume.

This is serious stuff. Not only is he set on breaking the Guinness World Record for the fastest marathon run while dressed as a heavy goods vehicle, he’s also raising money for Lincolnshire and Nottinghamshire Air Ambulance.

See also: Video: Farmer’s son builds one of the best gyms in the world

To smash the current record, Craig will need to run the 26.2-mile route in less than four hours and 55 minutes – that’s a full hour and six minutes longer than he took last year when he wasn’t dressed up.

On Sunday, 25 March, Craig ran the Gainsborough 10k escorted by a cluster of men dressed as carrots.

Watch the video below to see him running while inside the tractor, which is almost 6ft tall and 8ft long.

My awesome husband Farmer Craig with his Carrot army finishing the @Gainsborough10k in aid of @LNAACT here’s his JustGiving page if you’d like to donate. Thanks https://t.co/eNTXkWrd8w pic.twitter.com/rACIp30BMv

Craig, who farms about 400ha at Thonock Lane Farm just outside Gainsborough, has already surpassed his target of raising £2,500 for charity, with more than £3,000 collected to date. If you’d like to support him, head to his JustGiving page.

Craig and his wife Sally are also looking for secure parking for the tractor after the London Marathon on Sunday, 22 April, until they are able to collect it in the following morning. If you’re able to help please email Sally Williamson at sally.will3@gmail.com.