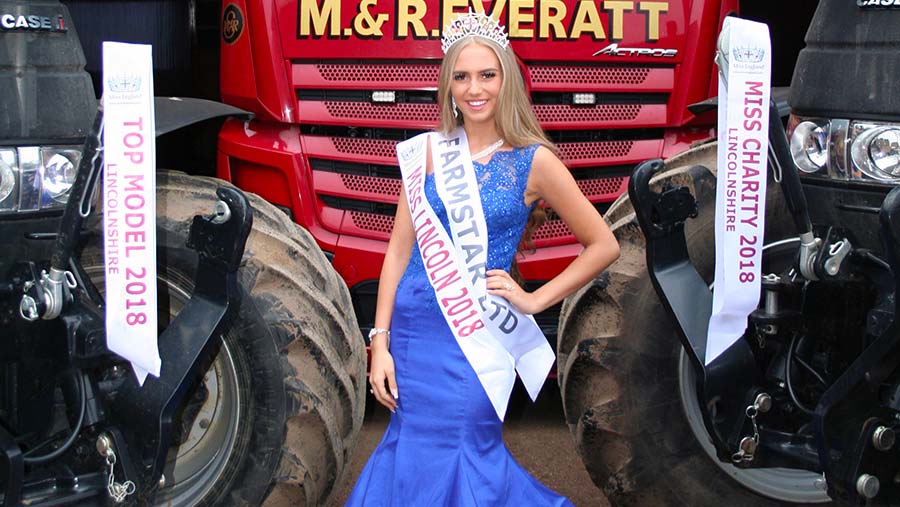 A Lincolnshire farmer’s daughter has set her sights on winning the Miss England competition, after being crowned Miss Lincoln and top model for 2018.

Milly Everatt was amazed to win on her debut appearance at the contest, which was held at Kelham Hall near Newark. It means she will head to the semi-finals of the Miss England contest in July.

The 18-year-old also bagged the Lincolnshire top model and Miss Charity titles, after she raised more cash than any of the 16 other hopefuls.

“I raised £560 for the charity Beauty with a Purpose, which is the Miss World competition’s own charity for disadvantaged children,” said Miss Everatt.

“To raise this money I held a party and charged for tickets and I also did some bake sales. I’m going to continue to raise money by doing a sponsored skydive in June.”

She also plans to organise a tractor run and another fundraising party at her farm in Eastoft, where the family farms about 1,200ha of arable land plus contracting.

When not at school studying A-level art and Spanish, Miss Everatt mucks in on the farm whenever she can and is also working on getting an HGV licence.

She has set up a donations page for anyone who wants to give some cash to her fundraising efforts.