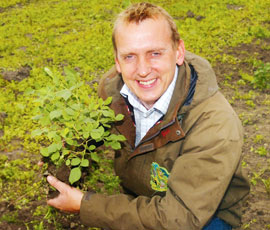 An unusual “sweet” crop is growing in West Yorkshire, thanks to one pioneering farmer. Nigel Burnham reports.

And with sweet giants Haribo and Tangerine Confectionery both based in nearby Pontefract, perhaps his latest venture – liquorice – is an inevitable development. But it took Australian retail guru John Stanley to finally convince him.

“It’s been at the back of my mind for a long time,” says Robert, who runs Farmer Copleys.

“It seemed strange to me that no-one else is growing liquorice commercially any more.

“But it was John Stanley who convinced me that it made good business sense. He’s been telling me I ought to do liquorice for years. So this year I thought I’d take the plunge.”

Robert, 42, planted a quarter of an acre of liquorice bushes at his 120-acre Ravensknowle Farm this summer, with a view to planting a full acre in time.

Having sourced the bushes from a nursery in nearby Wakefield, which supplies them as decorative plants to gardeners, he hopes to produce a tonne of “the raw product” – liquorice root – in three years, cutting out middlemen and selling thousands of 6in lengths of the stuff in his farm shop as chewing sticks at £1 each.

“I love sweet liquorice myself,” he says. “I’m not particularly bothered about the raw product.

“But I’m sure we’ll be able to sell it all as a chewing stick or mouth freshener in the farm shop. We’ll be the only farm in the country growing liquorice to sell as a food.”

The crop will be good news for Pontefract’s hugely successful annual liquorice festival – held each summer for the past 17 years – which attracts tens of thousands of visitors from across the country.

The festival celebrates the story of the Crusader monks returning from the Middle East who introduced liquorice plants to Pontefract – where they built the Priory of St John the Evangelist – at the turn of the 11th and 12th centuries.

Excavations at the priory have revealed the remains of a medieval pharmacy, where liquorice was extracted from the roots of the plant and used to make various medicines.

Over the following centuries, the plant – grown extensively by Spanish monks – continued to flourish in Yorkshire, especially around Pontefract, where the soil conditions were perfect for its cultivation.

Its main use in those days was in the manufacture of medicines and lozenges to ease coughs and stomach complaints.

According to local legend, production was revived in Tudor times when dried roots were washed ashore from wrecked Armada galleons – and their sweetness rediscovered by boys who clenched them between their teeth when beaten for misbehaviour at school.

But it wasn’t until 1750 that a local apothecary, George Dunhill, decided to add sugar to the recipe and liquorice finally became the irresistible sweet we know as the Pomfret or Pontefract Cake.

Nicknamed “Spanish” after the monks who grew it, the plant began to be grown on an industrial scale for Yorkshire’s many large sweet manufacturers.

In 1885, there were 10 companies in Britain producing the sticks commercially but homegrowers couldn’t sustain the demand and were eventually forced out of the market as much cheaper imports flooded in.

Today there are only two major liquorice factories in the UK – and they are both based in Pontefract. Tangerine Confectionary – part of Cadbury Trebor Bassett, which manufactures Liquorice Allsorts – and Haribo, manufacturers of today’s Pontefract Cakes. Both use liquorice mostly grown in Turkey, Italy, Spain and Asia.

Despite our cooler climate, liquorice – a herbaceous perennial, pea-like plant whose botanical name is Glycyrrhiza (Greek for “sweet root”) – will grow well once again in the deep, free-draining, sandy soil of Pontefract.

“It’s a very special plant. Below its distinctive foliage and pretty purple-blue flowers, its roots are the sweetest naturally-occurring substance in the world. They are 50 times sweeter than sugar.”

“They’re a bit like a privet bush to look at, similar to wisteria but thicker, and they grow to about 7ft tall and 3ft wide.

“It’s not warm enough in UK for liquorice to flower here, but that works to our advantage because it makes the roots juicier and sweeter.

“What we don’t sell as chewing twigs we will grind to a powder and mix them with our ice cream, beer, pork pies and sausages. You can do so much with liquorice. The sky’s the limit.”

Copley, who farms cattle at Ravensknowle with wife Heather, 39, and sons Jacob, 10 and Harry, 7, is confident his new crop will take off.

“We are always looking at new ways to create a new dimension to the farm and I think this will take us in another new direction,” he says.

“We’ve won Farm Shop of the Year three times, employ up to 55 people and have got a fantastic, really exciting business here.

“We work the seasons, starting with pick-your-own strawberries, through to our maize maze, then on to the pumpkin festival in the autumn and a live nativity at Christmas.

“I’m sure we’ll probably end up making our own liquorice sweets for the thousands of children who come here.”