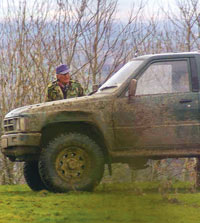 A Gloucestershire livestock keeper who breached an order banning him from keeping cattle has been handed a two-year suspended jail sentence and ordered to pay £7000 in legal costs.

Francis John Beavis, of Bishops Cleeve, was first banned from keeping cattle in 2006 after he was found guilty of animal cruelty charges. But Gloucestershire Trading Standards carried out a covert surveillance operation and caught Mr Beavis breaking the ban on five separate occasions.

This week Stroud Magistrates Court imposed a lifetime ban on Mr Beavis from owning, keeping or participating in the keeping of any animals. He was also given five 22-week prison sentences, suspended for two years, and ordered to carry out 240 hours of community service.

A Trading Standards official told Farmers Weekly that in June 2007 Mr Beavis was sentenced to six months in prison for identical offences.

“In April 2009 his daughter Annika Beavis, was also sentenced to six months in prison after admitting cruelty charges relating to the cattle that Mr Beavis had been caring for,” the official said.

Mr Beavis and his wife Inger both have a long history of animal cruelty offences, having a total of more than 50 convictions between them.

The court heard that when the couple, who farmed at Hill Farm, Oxenton, were disqualified from having custody of livestock in August 2006, they transferred the ownership of their cattle to a trust, making their daughter Annika the sole trustee.

Acting for the prosecution, David Sapiecha, of Colleton Chambers, Exeter, told the court that Mr Beavis had simply ignored the disqualification order and that claiming that his daughter was the keeper of the cattle was just a ruse.