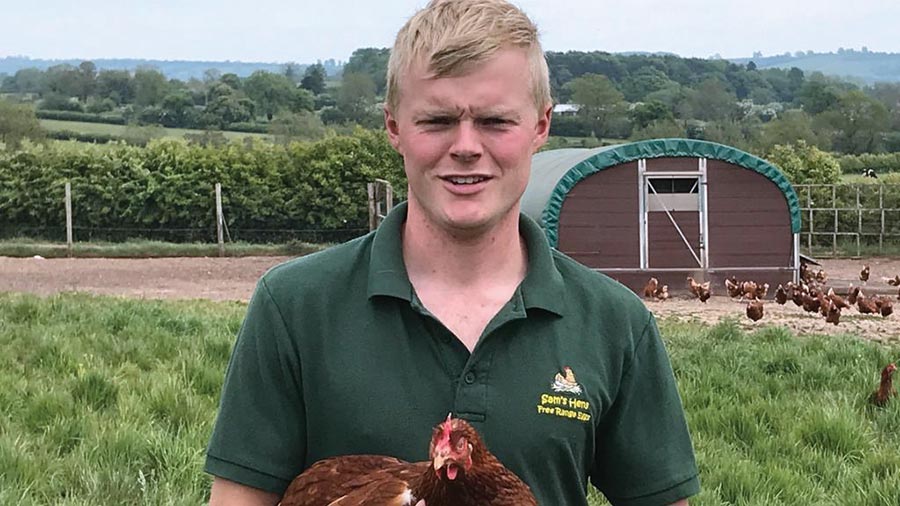 A rural community has launched a fundraising campaign after a much-respected young farmer was targeted by thieves.

Staffordshire-based Sam Hall, who supplies chicken and duck eggs to the trade and the public, experienced a break-in during the night of 10-11 May, with a freezer, its contents and the cash in an honesty box stolen.

“I’m out of pocket so I’m annoyed, but I’m also disappointed because people are usually so trustworthy and now one person’s spoilt it,” said Mr Hall, of Homestead Farm near Uttoxeter.

“There are enough problems in the world as it – without more,” added the 25-year-old, who started selling eggs when he was eight and now keeps 2,000 hens alongside the family’s dairy, beef and sheep enterprises.

News of the theft shocked locals and prompted one, Brian Benjamin, to set up a JustGiving page in a bid to raise £400 to replace the stolen items.

“When my partner Pauline and I saw what had happened, we were completely outraged,” said Mr Benjamin.

“We’re just local residents but, knowing how Sam started that business years ago, how hard he works and the quality of what he produces, we wanted to help. It’s just horrific. My heart went out to him.

“During coronavirus, when all the big supermarkets couldn’t supply eggs, he was still supplying everyone locally.

He added: “It’s one thing taking his freezer and his products, but it’s another stealing his honesty box – and that really hit home to us.”

The crowdfunding initiative, helping the “much-valued, small local business”, had raised £466 by Monday, 18 May.

Mr Hall was surprised but delighted to hear that his community was so keen to support him. “When [Mr Benjamin] rang to say he wanted to help, I said I was very grateful for the offer but I didn’t want to ask for money so he shouldn’t feel obliged to help – but he said they wanted to.

“He wanted to do it as a ‘thank you’ because, since the coronavirus crisis started, as well as supplying farm shops and butchers, I’ve been doing doorstep deliveries at night to people who can’t get out, particularly older members of the community.

“It’s nice to know there is support out there and it reminds you that there’s more good than bad in the world.”

The former Reaseheath student is undeterred by the break-in, planning to expand his enterprise, and is upbeat about the future. “Eggs are not an expensive food and a lot of people are shopping more locally since the coronavirus pandemic began,” he said.

Anyone with information can message Staffordshire Police on Facebook or Twitter, or call 101 quoting incident number 101 of May 11.