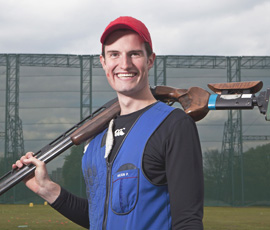 Peter Wilson, 25, from Sherborne, was widely tipped as one of Great Britain’s best medal hopes, and he lived up to expectations when he toppled Russian Vasily Mosin in the Double Trap shooting final this afternoon (2 August).

Despite being 15 years younger than his opponent, Peter held his nerve to shoot his way to victory at the event held at the Royal Artillery Barracks, bringing a spectacular end to Britain’s 12-year medal drought in shooting.

“It is just a dream come true.”
Peter Wilson

Speaking after his win, Mr Wilson said: “It meant a huge amount. It’s really, really difficult, y’know, I watched the other games and I’ve watched us win a couple of gold medals and a number of other medals and you watch these guys talking after these things and they say, it’s just impossible to talk about it, and it really is. It was an emotional roller coaster for me from start to finish.”

He added: “It’s amazing. Absolutely incredible. We really did boil down to the last pair so I can’t thank the crowd and everyone else here enough. It’s just amazing.”

The Olympian continued: “It was electrifing. It was just incredible to have a home crowd here in London as large as it was and to come away with gold.

“It is just a dream come true.”

Peter “broke his first trap” when he was 12 and partly attributes his interest in shooting to his upbringing on a farm.