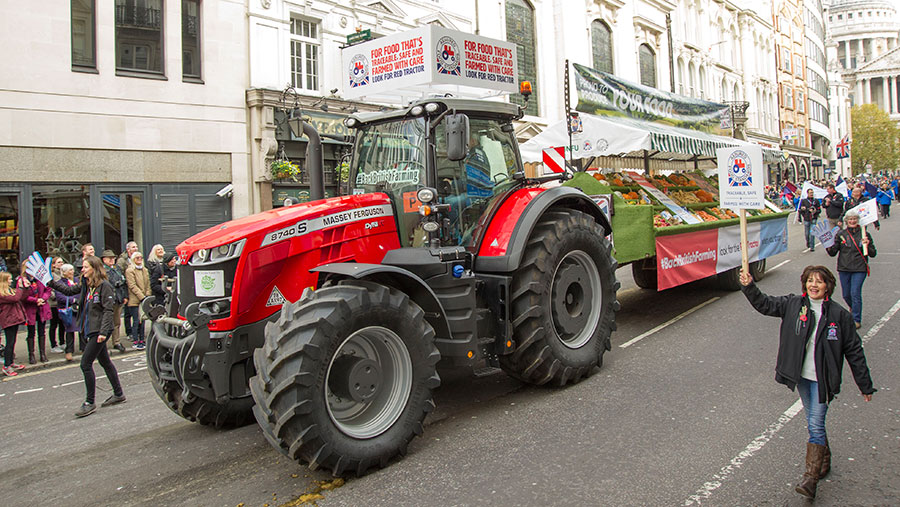 Farmers have taken to the streets of London to demonstrate the best of British farming for one of the country’s most historic parades.

The NFU joined forces with the Worshipful Company of Farmers, Red Tractor and Massey Ferguson to encourage the public to back British farming at the Lord Mayor’s Show in London on Saturday (9 November).

The event was watched by millions on BBC One.

Ten young farmer ambassadors were chosen to represent the NFU and promote British agriculture as a vibrant, modern industry with an exciting range of careers.

All the food used on the display was donated to City Harvest, a London-based charity that collects food and distributes it to organisations that provide meals for people across London who need it most, such as homeless shelters, soup kitchens, and centres for women experiencing domestic violence.

Master of the Worshipful Company of Farmers David Bolton said: “British agriculture plays a vital part in not only feeding the nation, but also in protecting the environment.

“In the year to come, the Worshipful Company of Farmers will focus on promoting an industry that is ever more efficient in producing food while enhancing the countryside.”

NFU vice-president Stuart Roberts said it was now “more important than ever that the general public get behind the nation’s food producers”.